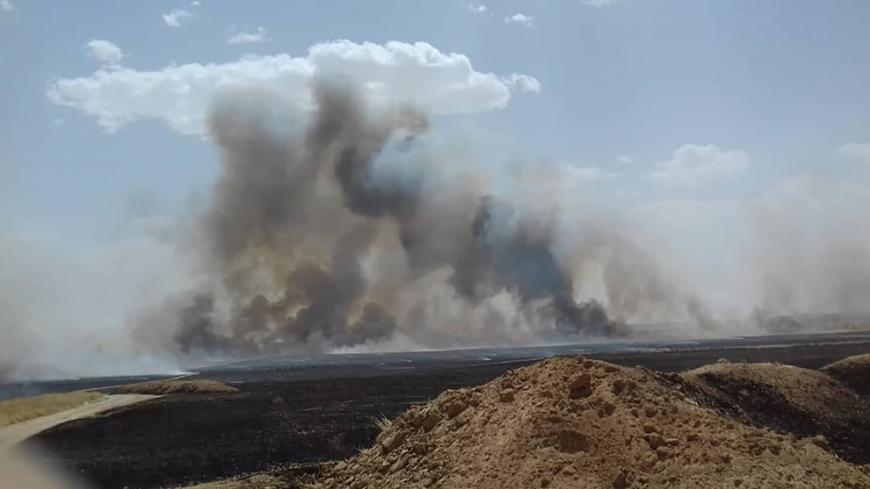 A fire burning agriculture lands is seen in the village of Khirbat Bustan in the countryside of Amuda, north of Hasakah province, Syria, June 1, 2019. - Lamar Erkendi/Al-Monitor

QAMISHLI - Someone is setting Syria's crops on fire and there are several suspects: the Islamic State (IS), Syrian regime forces, and/or Turkey and its allied fighters. The problem is especially severe in Rojava, the Kurdish autonomous administration area in northeast Syria, also known as Syrian Kurdistan.

On June 1, a military official from the Kurdish-led Syrian Democratic Forces (SDF) coalition told Al-Monitor on condition of anonymity that Turkey, IS sleeper cells and the Syrian government are all responsible for burning Kurdish crops.

“The fires that have ravaged thousands of dunams of wheat, barley and lentil crops in the Kurdish self-administration areas were planned and executed by the intelligence [sectors] of Turkey and the Syrian regime, along with IS sleeper cells. They aim to incite people against the Kurdish self-administration, create chaos and provoke sectarian strife between Arabs and Kurds, particularly in Raqqa, Deir ez-Zor and Manbij,” the official said.

He added, “Rapid intervention forces in Raqqa and Deir ez-Zor arrested a number of people after receiving information that they had been setting fire to large areas of agricultural land. Interrogations revealed that they had contact with Syrian and Turkish intelligence.”

Firefighters, in coordination with the Raqqa Internal Security Forces, extinguished a blaze on June 1 that destroyed 600 dunams (almost 150 acres) of wheat fields near the village of Khirbat Bustan in northern Hasakah province. Thousands of hectares have gone up in smoke in al-Tabqa, Raqqa, Deir ez-Zor, Kobani, Hasakah, Qamishli and Manbij since May 20, as new fires are set. (One thousand hectares equals almost 2,500 acres.)

Luqman Ahmad, who lost 50 acres of wheat, barley and lentils in the countryside of Hasakah, told Al-Monitor, “Sleeper cells affiliated with the Islamic State are burning our land. In previous years, we used to be able to control the fires caused by high temperatures rather quickly, and no more than 3 [meters] to 4 meters of land would burn down. Now, fields are often set on fire at night, [so that even] when temperatures are low, thousands of hectares go up in flames fast.”

The Rojava administration called on farmers to take precautions to protect their crops. On its website May 29 it said, “The emergency teams, the municipalities and councils affiliated with the democratic self-administration are on standby for any emergency, but [without coordination] between the administration and citizens, this will remain insufficient.”

Ayoub Mustafa, a lawyer from Raqqa, told Al-Monitor that though IS had been defeated, it still carries out terrorist operations through local residents, mainly in Raqqa and Deir ez-Zor, who are protected by their tribes. He noted that IS adopts a scorched-earth policy when it's defeated and withdraws from an area.

“IS is well aware of the role agricultural crops play for farmers financially and it is burning them in revenge against the people who supported its expulsion from their areas. Burning crops will lead to the destruction of the soil and will have harmful effects on the health of civilians, increasing rates of respiratory diseases,” Mustafa noted.

The SDF, in coordination with the international coalition against IS, arrested 15 IS members May 28 in the village of Qana, south of Hasakah. Also, IS itself has bragged about setting some of the fires.

Through its weekly newsletter, al-Naba, IS claimed responsibility for burning crops in SDF-controlled areas of northeast Syria. It issued a report May 31 identifying the lands the group burned in Raqqa, Hasakah and even eastern Aleppo province, pointing out that the fires extended to lands owned by SDF officials and fighters.

IS called on its fighters to burn more land, saying, “'[There are] thousands of dunams of land planted with wheat and barley, and before you stand [farmers'] orchards, fields, homes and their economic structures, so go ahead, take action and may God bless your harvest.”

But it appears there's plenty of blame to go around. On its Facebook page, the Rojava administration said, “Most of these incidents are deliberate by various parties, such as IS, the Syrian regime and Turkey, which want to ruin the region’s economy and threaten the livelihood of its residents.”

Turkish forces reportedly fired incendiary weapons May 29 toward agricultural lands in the village of Abu al-Soun near Sari Kani city on the Syrian-Turkish border, setting fire to 250 dunams of agricultural land.

A farmer from Sari Kani, Said Omar, told Al-Monitor the Turkish army was deliberately firing at crops, as well as farmers, and setting vast areas of cultivated land ablaze.

Salman Baroudo, one of the leaders of Rojava's Economic and Agricultural Authority, told Al-Monitor that 16,000 hectares have been turned to ashes in the Euphrates region, and a total of some 4,000 more in al-Jazira, Deir ez-Zor, Raqqa, Manbij and al-Tabqa.

Farmers have endured losses of 2 billion Syrian pounds (around $4 million), he said, adding that authorities are continuing their investigations to determine the perpetrators behind the fires.