The Kurdish self-administration in Syria issued a new law forcing the youth to join military service. 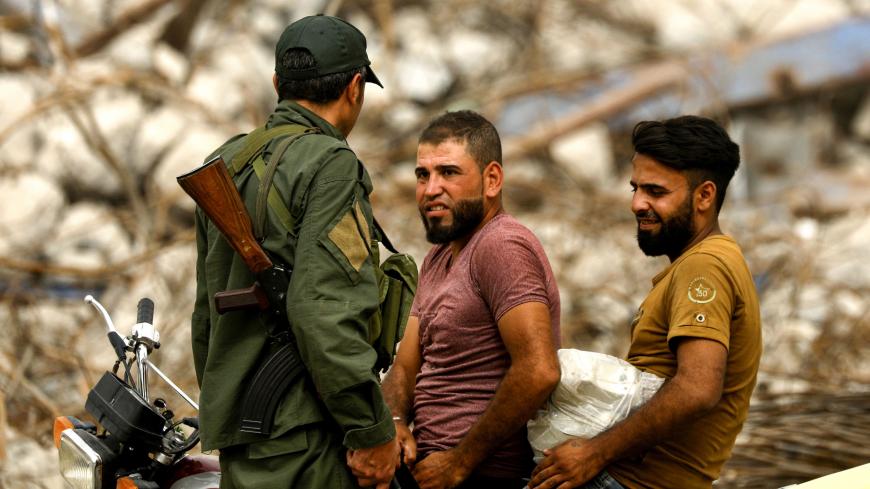 A member of the security forces speaks with men riding a motorcycle at a checkpoint in Raqqa, Syria, Oct. 16, 2018. - DELIL SOULEIMAN/AFP/Getty Images

In the town of Ain Issa, in Syria’s northeastern governorate of Raqqa, the general council of the self-administration for northern and eastern Syria approved June 23 the Self-Defense Duty Law in northern Syria. The council also gave the committees for self-defense the authority to determine the age of recruits within their areas of control.

The youth of al-Jazira and Kobani had different expectations as they expected the old conscription law to change. As a result, protests broke out one day after the decision was issued and are still ongoing in several self-administration areas. Both Kurds and Arabs believe they are being discriminated against as they are forced to join the ranks of the Self-Defense Forces, fighting alongside the Kurdish-led Syrian Democratic Forces (SDF), while the youth from other regions were not.

Locals in al-Jazira and Kobani felt a sense of injustice with the law’s failure to unify the conscription age.

On July 6, Al-Monitor met with Hassan Berkel from Kobani who said the decisions were “unfair and aim at emptying the area of its residents.”

He said, “Had the conscription age been determined — say for those born in 1990 — the people of Kobani who are now in Turkey and the Kurdistan Regional Government [KRG] would have returned and helped rebuild their towns.”

The Self-Defense Duty Law was first introduced in November 2014 by the self-administration and the ages were set at those born in 1986 and the compulsory service period was 12 months. It stipulated that all those between the ages of 18 and 38 are considered recruits if they do not provide reasons for postponement such as education, health issues or being a relative of a member of the People’s Protection Units who were killed in battles.

On June 17, Al-Monitor met with Juan, a young man from Qamishli who was born in 1988 and preferred not to state his family name. He criticized the work and decisions of the self-administration saying it was “selective and harmful to the area.”

He noted that whenever there is a conscription campaign and the self-administration police start cracking down on recruits, he hides in his home, sometimes for two weeks at a time.

“The majority of youths who did not leave al-Jazira and Kobani are born between 1984 and 1990. Most of them have families to support and if they are not exempted from conscription; it poses a threat to their children and their future,” Juan said.

He added, "[The law] pushed many youths to leave. If that age group is exempted, people from all over would start coming to the Kurdish area in Syria and contribute to the economic market and the educational process, among others.”

The self-administration in northern and eastern Syria is unifying all decisions and general laws and coordinating its work, especially in terms of service and security, in preparation for forming a single central government for the management of northern Syria. However, it still allows each subsidiary branch to independently determine the conscription age.

Activists launched an online campaign protesting against the nonunification of the conscription age, using #YesToUnifyingConscriptionAge, and some politicians, intellectuals and residents joined in to demand the same.

Activist Alain Murad who is in charge of the campaign told Al-Monitor the reason for the protest is because “Article 14 of the Self-Defense Duty Law is a violation of the Charter of the Social Contract established by the self-administration, which calls on the equal rights and duties for all citizens.”

He noted that all they want is to “unify the conscription age so residents do not suffer injustice and regional discrimination.”

Murad said locals in al-Jazira and Kobani born in 1986 and later will have to serve while their peers in Raqqa and Deir ez-Zor can continue their lives, which "creates racial strife and discrimination in the region.”

Head of the Defense Committee in al-Jazira Zidane Al-Assi wrote in a private post on his Facebook page about the ongoing debate, saying that a 12-month military service in all areas is obligatory but each one has its own particularity. “The law is not at all unfair and does not protect those who are escaping their defense duties,” Assi wrote.

Murad responded to Assi’s arguments, saying, “The particularity excuse the self-administration is giving is not convincing. If so, then why do the residents of Kobani not serve in the Euphrates area and the youth of Qamishli in al-Jazira? Instead they are being taken to Raqqa and Deir ez-Zor while their counterparts there do not serve.”

Murad criticized how the law is being applied selectively, saying, “ The self-administration wants to unify decisions and laws in all areas under its control but it is still excluding the defense forces and the army.”

Locals are skeptical and seem to be displeased with the excuses presented to them.

Umm Shirwan, from al-Malikiya (Dirk) in the far northeast, who has not seen her son since 2014, told Al-Monitor that the conscription age needs to be unified. “I was not convinced with Assi’s arguments. If they raise the conscription age, my 28-year-old son Shirwan would return from Dahuk in Iraqi Kurdistan.”

She believes that the Kurds paid a greater price than was required of them and today others benefited from it. “Thousands of young Kurds were martyred in Deir ez-Zor, Raqqa and Manbij, while the youth there lived their lives normally. It was our children who were forced to leave their homes," she added.

Al-Monitor tried to communicate with members and leaders of the legislative council and the defense office in al-Jazira, but to no avail.

In order to escape military service, Fadi Youssef, from Tirbesbi, 95 kilometers (59 miles) east of Hasakah, who was born in 1988, fled to the KRG. “We are told we either serve and potentially are martyred or wounded, or we stay away from our homes — as if we are being looked down on. That's not how countries are run,” he told Al-Monitor over the phone.

Youssef wants to return to his hometown and open a fast food shop. “I thank the members of the legislative council who defended our rights to return and live normally, but it seems there is no hope for me to return and work where I was born and raised,” he concluded.