Residents of Syria’s Raqqa governorate are protesting the conscription efforts by the Kurdish-dominated Syrian Democratic Forces as young men who refuse to enlist are arrested. 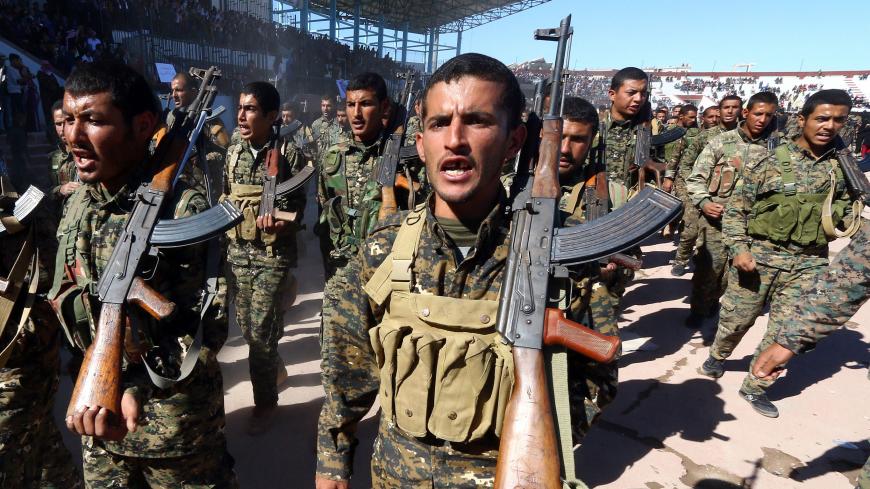 ALEPPO, Syria — The Kurdish-dominated Syrian Democratic Forces (SDF) is stepping up efforts to force young men into military service in the northern province of Raqqa. Though SDF leaders deny that service is compulsory, on May 18 its Military Discipline Units arrested 20 young men from Tel al-Saman, Khaniz and Mazraat Tishrin in Raqqa for avoiding service and took them to training camps.

The arrest campaign has raised public ire in northeast Syria, specifically in Raqqa, though arrests have been made across the Euphrates region that SDF controls, such as Kobani, Manbij and its countryside and Al-Jazira. The campaign targets all ethnicities, including Arabs and Kurds.

The Committee for Protection and Self-Defense in Raqqa, affiliated with the autonomous administration areas in northern and eastern Syria, is tasked with recruiting for the SDF. The recent arrests came after a May 14 decision by the defense committee in the Euphrates region, calling on men between the ages of 18 and 28 to perform what SDF describes as “self-defense duty.”

The SDF receives support from the US-led international coalition against the Islamic State.

A local source spoke with Al-Monitor on condition of anonymity about ongoing protests led by Arabs against Kurdish rule in Deir ez-Zor and against the conscription efforts as well as wide arrests of those the SDF accuses of belonging to the Islamic State.

Reuters reported in June that according to residents, "Many of [Raqqa city's] over 100,000 residents are angered by a policy of obligatory military conscription of youths and resentful of perceived discriminatory practices against the majority Arab population by senior Kurdish officials who effectively run the city."

The SDF had conducted a previous such campaign in September, imposing strict curfews, establishing security checkpoints and disarming citizens. At least 20 people were arrested for allegedly avoiding military service or being IS militants. In January, SDF-affiliated military police arrested 12 men from Tel Hammam and Hammam al-Turkman in Raqqa province because they refused to join the SDF.

This month, an SDF source told Al-Monitor on condition of anonymity that per the May 14 decision, Syrians who hold residency in other countries or who have been residing abroad for more than five years can be exempted from military service in return for a $6,000 fee. They also have the option to delay their military service for $400 per year.

Abdul Latif Mohammad, an activist from Raqqa, told Al-Monitor the SDF is erecting checkpoints all over the city, and in other cities like Tel Abyad, Tabaqa and Ain Issa, to arrest young evading military service.

“The conscription campaigns have pushed thousands of youths from Raqqa to head to opposition-held areas in Aleppo’s countryside. Some were lucky and entered Turkey, while others fled Raqqa and remain in hiding. However, they can't wander around the governorate or cross roads where SDF checkpoints stand. Many of the conscripts fled after their recruitment, and SDF police officers are raiding their houses to rearrest them and send them to the camps," Mohammad said.

“Conscription campaigns target the Arabs of the Arab-dominated governorate of Raqqa. Arabs do not want to join the SDF and refuse to send their children.”

According to Khalaf, the SDF is meeting with local influential figures, telling them that IS was expelled thanks to them and that they have the right to make decisions and impose rules. He said the SDF is telling citizens that refusing to serve in the military would lead to the return of IS bombings or Syrian government forces to their areas.

“The SDF security practices are annoying. The group is abducting youths at its checkpoints and dragging them to conscription camps," Khalaf said. “The conscription campaigns target poor families in Raqqa. Most of them do not have money to make ends meet. The men of the house often join the SDF to get by.”