Syrian Christian militia leader Ahiqar Issa talks to Al-Monitor about the reasons why Christians have taken up arms against terrorist groups in Syria. 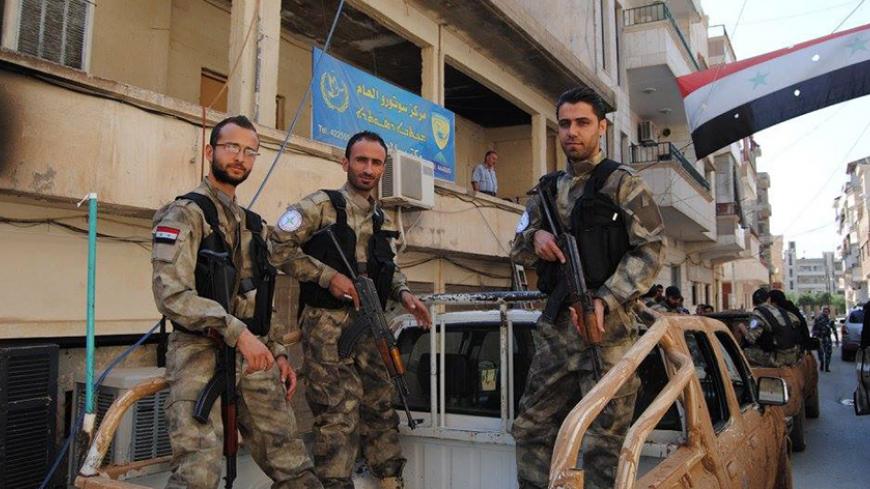 Fighters from "Sotoro," a Syrian Christian militia, stand on the back of a truck in Qamishli, June 27, 2015. - Facebook.com/Sootoro

BEIRUT — The armed parties to the Syrian conflict include the regime's army, various opposition factions, the Islamic State (IS), Jabhat al-Nusra and other groups, as well as Kurdish groups such as the Kurdistan Workers Party and the armed forces of the Kurdish self-administration. However, only few know that there is also an armed Christian militia in Syria fighting on several fronts along with all those groups in a bid to protect the smallest Syrian minorities threatened with extinction.

Al-Monitor interviewed Ahiqar Issa, one of the Christian militia officials, who talked about the armed force to which he belongs. He talked about the force's goals and latest engagements, and insisted that he considers himself Syrian first and foremost, and then Syriac Orthodox.

Issa proudly said that he belongs to an indigenous group that was founded in Syria 2,000 years ago — well before other minority groups in Syria — and that this is what drove him and his militia to take up arms to defend their identity and land. Issa lives in the al-Jazira region, which makes up the Syrian desert border area with Iraq and Turkey. This area administratively stretches along several Syrian provinces, including Deir ez-Zor, Raqqa, Hasakah and Qamishli.

Issa said that up until the outbreak of the Syrian war in 2011, Christians of different sects numbered about 250,000 in these areas. However, only 100,000 are left today, as the rest were forced to leave their homes and villages to escape persecution and being killed at the hands of their many enemies.

With much regret, Issa confirmed that most Christians (Syriacs and Assyrians) who left their areas have almost all emigrated, in particular to northern Europe and Sweden, which has been home to a large Christian Syrian community for decades. Those who moved to safer areas inside Syria are a small group. The Christians’ displacement might impact the future of this authentic Syrian community and hinder it to restore its presence in its areas of origin, even after the end of the Syrian war.

Issa said that Christians have started to gradually take up arms in al-Jazira region since the fall of Deir ez-Zor and Raqqa in June 2014, and since the Syrian state and its institutions were no longer actively present in these remote areas, which are roughly 1,000 kilometers (621 miles) from Damascus.

However, the Christians’ taking up arms independently followed the emergence of IS, which expanded in the provinces of Raqqa and Deir ez-Zor, announced the caliphate in late June 2014 and subsequently threatened other Syrian regions in Hasakah and Qamishli. IS’ infiltration of Mosul and the Ninevah plains in Iraq, where it displaced and fully uprooted all Christians between June and August 2014, encouraged the mobilization of Syria's Christian community.

In response to the question of where they get their arms and ammunition, Issa said that these are easily found and can be purchased in all the areas that the Syrian state is absent from, facilitated by the smuggling of arms, ammunition and military equipment on the border with Iraqi Kurdistan and Iraq.

According to Issa, within a year the armed Christian forces — known as “Sotoro,” a word made up of the first syllables of the words “protection and defense forces” in the ancient Eastern Syriac language — numbered a few hundred members in those areas.

But what can a few hundred members do to tip the balance against military forces in a fierce and brutal war? With great confidence, Issa answered that his fighters had prevented extremist groups from fully occupying the Khabur area in Hasakah province.

He said that this region is made up of about 30 Christian villages and towns that are home to Syriac and Assyrian Christians stretching along an area of ​​about 1,200 square kilometers (463 square miles). In late February 2015, large groups of IS fighters attacked the region, killed a number of civilians and abducted hundreds of others whose fate is yet to be revealed. However, according to Issa, the “Sotoro” forces confronted them in several locations and engaged in fierce clashes, which led to the withdrawal of IS and the liberation of most of the Khabur villages.

In addition, Issa asserted that his forces liberated Hasakah in the battle that led IS and Jabhat al-Nusra fighters to retreat in mid-June. Following the end of the battle, and after the fighters were repelled, a Syrian army officer visited the “Sotoro” post and met the small group of fighters who had defeated hordes of attackers. Issa said that the officer had asked them about the weapons used in the battle, and that he was surprised to learn that all they had used were a few rifles and medium machine guns.

When asked how the Syrian Christian community and its militia are doing today in light of the recent developments, Issa noted that two additional factors are now at play: the relationship with the Kurds and the Russian intervention in the Syrian war, whose impact has yet to unfold.