Kurds step up efforts to form self-government in northeast Syria

The Syrian Democratic Council is forming an autonomous-area administration in parts of northern Syria controlled by US-backed Kurds and holding talks with the Syrian regime. 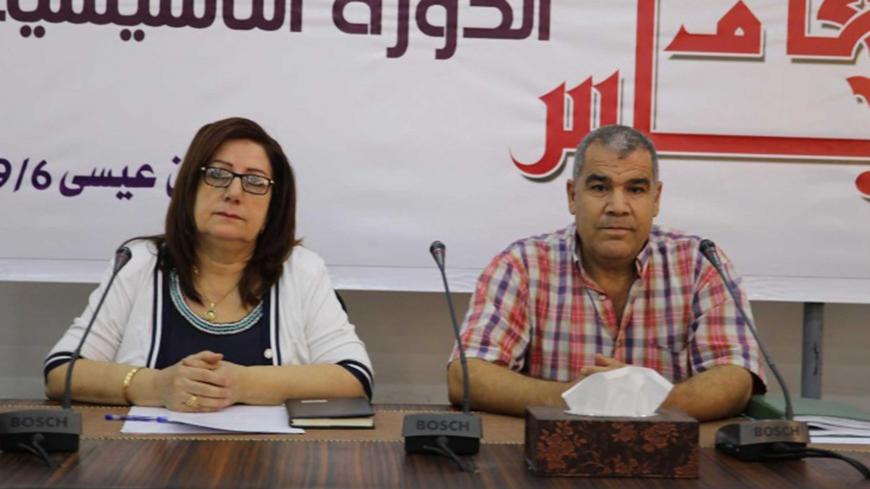 Farid Ati (R) and Siham Qeyro, who were elected co-chairs of the newly formed General Council of Self-Administration in Northern and Eastern Syria. - Facebook/K24English

Meeting Sept. 6 in Ain Issa, in Raqqa province — where US forces and the international coalition against the Islamic State (IS) remain — the SDC created the General Council of Self-Administration in Northern and Eastern Syria.

The General Council will coordinate between Kurdish-majority autonomous administrations and the civil councils of areas with Arab majorities. It will form executive committees to govern the area, which is under Kurdish control.

The General Council includes representatives of local councils and legislative and executive authorities affiliated with the administrations of Al-Jazira (Al-Hasakah), Kobani, Manbij, Raqqa and al-Tabaqa provinces, and the northern part of Deir ez-Zor province. The new council will work under the umbrella of the SDC, the political arm of the Syrian Democratic Forces (SDF) controlling northeastern Syria.

Ati explained the way the General Council will operate: “Two members from the board are chosen and tasked with forming executive committees within 21 days at most. … These committees will constitute the pillars of the government ruling in northeastern Syria, with its headquarters in Ain Issa. Thus, the new entity extracts power from two sources: a political one (the SDC) and a military one (SDF). They are allies, and the US and the international coalition back them in northeastern Syria.”

The charter was drafted by a preparatory committee of regional representatives that supervised the General Council's formation.

Ati says the authorities managing northeastern Syria will get their power and legitimacy from the people, who he believes are the source of any authority. When asked about Kurdish hegemony in the region, he told Al-Monitor the administration in north Syria is shared by Kurds, Arabs, Syriacs, Assyrians and Turkmens. “We won’t go into the political aspect. We will focus on serving people. A political party representing us (the SDC) will handle the political affairs,” Ati said.

The self-administration supporters in northern Syria also are not on good terms with the Syrian regime.

Yasser Suleiman, from Deir ez-Zor, was named vice president of the General Council. He explained that the geographical area the General Council is in charge of is wide and includes several Syrian provinces, so the administration has broad powers.

Suleiman told Al-Monitor via the Whatsapp messaging app that the General Council is working to organize its operational structure. “The General Council was formed to serve citizens and address their concerns and desires. It represents all components of the region within the administration," he said.

Suleiman noted that the board members were sworn in in Kurdish, Arabic and Turkish. They also include Christians and minorities like Yazidis, which he said is unprecedented in Syria.

Forming the General Council could pave the way for officially declaring a northern Syria government of self-administration. Meanwhile, the SDC and the Syrian regime are holding talks on that topic in Damascus.

Turkey has long accused Washington and the international coalition of allowing the Kurdistan Workers Party (PKK) to take the lead in northern Syria. The Syrian opposition supports Turkey’s stance, claiming that the region is being governed by the Democratic Union Party, which is supported by the PKK. The opposition and Turkey consider both parties to be terrorist groups.

However, Suleiman noted that Turkey has no right to interfere in Syria’s internal affairs.

Suleiman argues that Kurds are a legitimate component in the region. "They have fought against IS and are known for their leniency in dealing with others. It's not true that the region is taking on a Kurdish aspect. All components are represented in the northeastern Syria administration.”

Ati and Suleiman agree that the United States doesn't explicitly support the formation of a government in the north, but they don't deny they are allies of the international coalition and the United States, through the SDC politically and the SDF on the military level. “The US will not interfere in our work as long as [the work] is democratic and it backs democracy,” Ati said.