People living to the east of the Euphrates in Syria wonder about the fate of the Kurdish self-administration after the Turkish military attack and the recent Russian, Turkish and US political agreements on the status of this region. 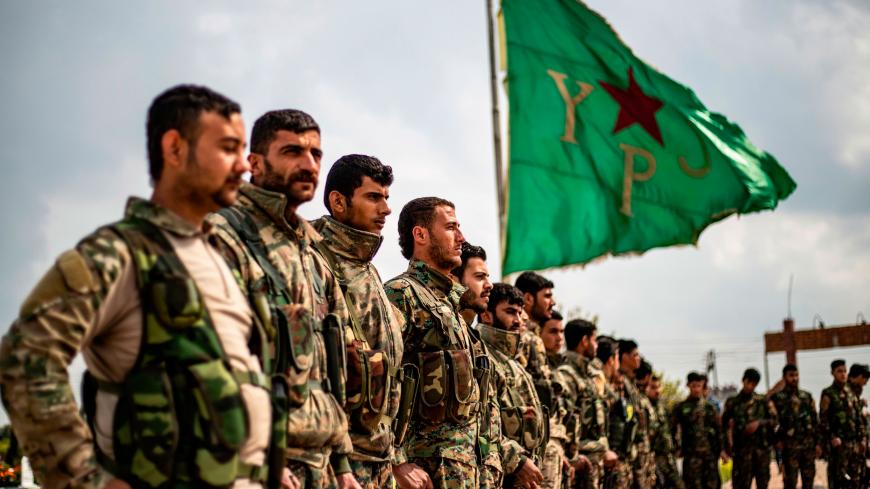 QAMISHLI, Syria — On Oct. 12, Turkey announced it has seized the area from Ras al-Ain to Tell Abyad as part of Operation Peace Spring. The area extending from Derek on the border with Iraqi Kurdistan to the city of Darbasiyah adjacent to the Turkish-Syrian border was separated from the rest of the area to the east of the Euphrates. The Turkish army and Syrian opposition armed factions had taken over this area. It should be noted that Ras al-Ain — known as Sere Kaniye in Kurdish — is seen as the gateway to other areas in northern Syria and to the east of the Euphrates.

Under the agreement between the Syrian Democratic Forces (SDF) and the Syrian regime on the return of the Syrian regime army to the self-administration areas, Syrian forces entered the town of Tal Tamr, 30 kilometers (19 miles) from Ras al-Ain, on Oct. 14.

Syrian regime forces equipped with tanks and heavy vehicles deployed in the vicinity of the city of Manbij, as well as near the cities of Tabqa and Ain Issa.

The self-administration said in a statement published in mid-October that it is continuing its administrative work and that the agreement is only military and includes the deployment of the Syrian army on the border strip only.

Al-Monitor contacted journalist Baz Eli Begari in France, who ruled out any indication that the self-administration will remain intact. “In any case, it was expected that any settlement, whether by military or political means, would impose a new reality that would not allow the status quo, not only in the self-administration's areas but across Syria.”

Begari said it is impossible to turn back the clock in the region to before the beginning of the crisis in Syria. “On the ground, the regime is exhausted and fragmented and does not have the ability to fully control the region and manage it alone. Meanwhile, the self-administration was able to establish kinds of institutions that can be built upon, developed and integrated in the future Syria state institutions.”

Al-Monitor also met with Nashat Zaza, a member of the political bureau of members of the Kurdistan Democratic Party-Syria. “Although this administration was not an ambitious target for our Kurdish people and its political project in the future Syria, it is a de facto product of the reality,” he said. “Despite our disagreement with this administration’s programs and practices and [our disapproval] with its representatives it remains a logical solution. Our situation is better than what our people are witnessing at the hands of terrorist factions loyal to the Turkish government.”

Zaza presented his future vision of the self-administration, which has seen the area under its control shrink. “Talking about the self-administration has become a thing of the past. This self-administration has seen its pillars undermined by the Turkish occupation and invasion. Turkey has bitten off large areas of Jazira and Kobani cantons. This is not to mention Turkey’s occupation of the province of Afrin. In addition, the regime and its allies took over the cities of Kobani and Manbij, which killed the chances of any political project that guarantees the Kurdish people their legitimate rights.”

For Zaza, it is possible that all parties will decide against the self-administration. “There may be endeavors from different parties to subject the self-administration to a form and program or even a formula of management that suits them. This is, of course, unless the foreign factor, especially the US and the European Union, has another say in this regard.”

Other Kurdish political analysts and journalists believe that the self-administration should remain as is and proceed with its normal functions.

Akram Hasso, a former chairman of the Executive Council of the Self-Administration, told Al-Monitor, “Turkey controls large parts of the self-administration. The regime is present in Manbij, Kobani and the border strip. UN [Security Council] Resolution No. 2170 to fight the Islamic State [IS] became void with the US announcement that IS had been eliminated in northeastern Syria, which precipitated the US withdrawal from Syria.”

Hasso said, “I believe the Turkish attack and the attempt to occupy the East Euphrates area is a unilateral act and that the US does not bear any responsibility for its repercussions. Therefore, saying that the US greenlighted the Turkish military operation does not legitimize this occupation. Therefore, Turkey has become an occupation force of a neighboring country.”

“The fate of the agreement signed between the self-administration and the Syrian government under Russian auspices at the military level will hinge upon the extent to which Russia and the Syrian regime are ready to translate the military agreement into a political one that would spare the self-administration and the Kurds the genocide carried out by Turkey and its terrorist factions,” he added.