Like Moscow and Washington, Ankara seems to be coveting the oilfields of Deir ez-Zor in Syrian Kurdistan, which Kurds fear would give Turkey an opening to take over the entire Rojava area. 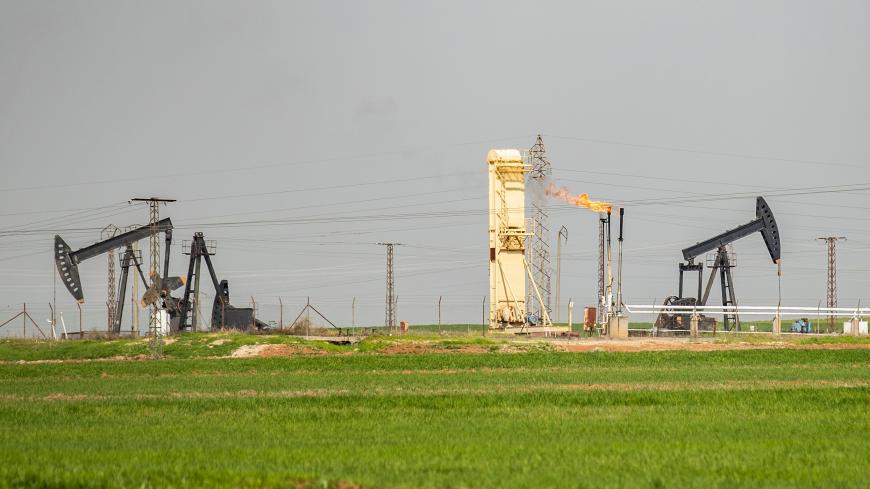 Pump jacks operate in an oil field in the countryside of al-Qahtaniyah town in Syria's northeastern Hasakah province near the Turkish border, March 11, 2020. - DELIL SOULEIMAN/AFP via Getty Images

HASAKAH, Syria — Syrian Kurds have been concerned for some time that Turkey's plans include much more than acquiring oil fields in their region. According to some observers, Ankara's strategic goal is to completely eliminate the autonomously administered area of northeast Syria, known as Rojava or Syrian Kurdistan.

Amed Sido — a liaison between the Kurdish-led Syrian Democratic Forces (SDF) and the international coalition against the Islamic State (IS) — believes this is true. Sido recently told Al-Monitor that Ankara plans to take over more areas that SDF liberated from IS. “This is evidenced by Turkey’s continuous bombardment of the countryside of Tell Abyad, Manbij, Ain Issa, Tell Tamr, and other areas," Sido said.

The SDF-affiliated Tell Tamr Military Council on March 24 circumvented artillery shelling by the Turkish army and Syrian opposition armed factions targeting the villages of al-Arisha, Umm al-Keif and Aneek al-Hawa in the Tell Tamr countryside, a predominantly Christian area. No casualties were reported. Also, military sources reported to local media outlets that a civilian and a Syrian government soldier were injured during heavy shelling carried out March 15-16 by Syrian opposition forces on villages in the countrysides of Tell Tamr and Tell Abyad, north of Raqqa. No casualties were reported.

Violent clashes also broke out March 23 near Tell Abyad between the SDF and Syrian opposition factions. This followed attacks the factions launched on SDF military bases that killed 15 fighters and a prominent leader from the opposition. According to the same military sources, the Turkish army and opposition fighters also shelled the villages of Ain Issa and Tell Abyad as well as the M4 highway.

On March 27, reports circulated in the media about new understandings expected to be reached soon between the autonomous administration and Damascus, under Russian sponsorship. According to the reports, Russian officials had met March 25 with SDF commander Mazlum Kobane in Qamishli for that purpose.

Author and journalist Naline Boutan told Al-Monitor, “The initiative is not new, but Kurds don't trust the Russian side or the Syrian regime. Russia has proposed similar initiatives in the past. On Feb. 3 and 4, a delegation from the autonomous administration ... met with the Russian ministers of defense and foreign affairs at Khmeimim air base in Latakia."

Boutan added, "The delegation and ministers then headed to Damascus, where they met with the head of the Syrian National Security Bureau, Maj. Gen. Ali Mamlouk. Back then, the Russian side promised [the Kurds] support and guarantees for a comprehensive deal between the autonomous administration and Damascus. But this didn't happen and after [the meeting], the Syrian president even denied the Kurds’ [historical] presence and cause in Syria in statements that drew sharp criticism on social media. Kurds responded by showing documents that prove their historical presence in Syria. Thus, Kurds trust neither the Russian side nor the Damascus government."

Regarding the SDF’s relations with Moscow and Washington, Sido told Al-Monitor, “There are no reliable guarantees from the Russian and US sides. We had our share of bitter experiences with them. The Russians played a dangerous role in allowing Turkey to occupy Afrin two years ago, while the US had an ambiguous position that led to the occupation of Ras al-Ain and Tell Abyad and the rest of the villages and towns that IS had previously occupied and were later liberated by SDF.”

He continued, “The SDF made great sacrifices during the battles to liberate those areas, but today they are occupied by Turkey and the Syrian armed groups affiliated with it.”

Kobani did not rule out a Turkish military operation against any or all of the cities and towns on the Syrian-Turkish border strip and reaching down to the oil fields of Raqqa and Deir ez-Zor. But he added, “The SDF forces are always prepared to protect the cities of Rojava from any Turkish attack to occupy Kobani, Manbij, Tal Rifaat" and areas east of the Euphrates.

Abu Omar al-Idlibi, commander of the Northern Democratic Brigade, told Al-Monitor, “Turkey has its eyes set on Syrian oil and gas, including in Deir ez-Zor, which has one of the largest Syrian oil fields. Turkey is seeking to nibble more Syrian lands under the pretext of protecting its national security. The Turkish government seeks to obtain the energy resources it previously received from IS. Ankara lost those supplies when the SDF eliminated IS.”

He added, “The Astana and Sochi conferences aimed to conclude and implement deals between Moscow and Ankara. Russia wants complete military power for the Syrian regime over Idlib and over the entire Syrian territories. This goes against UN resolutions related to the Syrian crisis, most notably Resolution 2254 providing for a comprehensive, complete and just political solution for all Syrians. This resolution is a priority for us, and Turkey exploited this as a golden opportunity to nibble and annex new regions in northern Syria, invoking its national security. This time, Turkey plans to seize Syrian oil through a deal with Russia.”