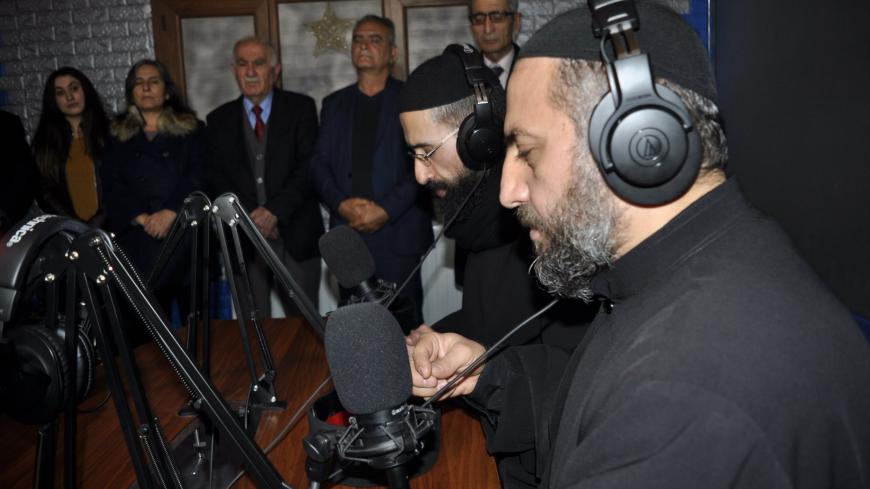 People take part in a radio broadcast on Suroyo FM, in Qamishli, Syria, in a picture uploaded Feb. 3 2020. - Facebook/Suroyofm

QAMISHLI, Syria — A small radio station in the town of Qamishli, on the border of Turkey and Syria, has been broadcasting in the ancient Christian liturgical language of Syriac. The station, run by a husband-and-wife team, is a newcomer to the multilingual radio scene in Rojava, ruled by the Autonomous Administration of North and East Syria.

Suroyo FM settled into its regular broadcasts in Syriac and Arabic on Feb. 2, after three months as a pilot project. Broadcasts in Armenian and Kurdish are expected to follow within the year.

The station will offer news reports from correspondents on the ground throughout the volatile region. It will also broadcast on social issues and the rich cultural heritage of the area inhabited by Arabs, Kurds, Assyrians and Armenians.

“We will have a variety of programs that cover politics, social issues and culture,” co-director Samer Hanna told Al-Monitor. “We will address the culture and history of the Assyrians and mark historical and religious occasions. We will have special programs on health and women.”

“We are now broadcasting for 12 hours — from 8:00 a.m. to 8:00 p.m. — our news and cultural programs to this region in the northeast of Syria, including Qamishli, Amouda, Al-Darbasiyah, Tal Tamr, Al-Hasakah, Qahtaniya and Derik and their suburbs,” co-director Maria Hanna told Al-Monitor. She is also a producer and presenter of news programs in Arabic and Syriac.

The station's Feb. 2 official opening, held at the station in the neighborhood of Al-Arbawiya, was attended by representatives of the Assyrian community, the autonomous administration and the local police force.

The radio station, whose slogan is “Giving a United Voice to Everyone,” employs seven journalists full time and many correspondents on the ground.

“We also have correspondents in most cities of northeast Syria who have their ears to the ground, including the military front lines, such as Tal Tamr and Ain Issa,” Samer said, referring to the venues of intensified fighting during Turkey’s Olive Branch Operation.

“These diverse programs are to be broadcast in Syriac, Assyrian, Chaldean and Arabic,” he said. “We will tackle the rich heritage of the region — from Assyrian to Chaldean.”

He said that Suroyo FM is an affiliate of Suroyo TV, an Assyrian/Chaldean/Syriac satellite television channel that has been broadcasting for 15 years from its studios in Södertälje, Sweden.

Journalist Nalin Boutan told Al-Monitor that media has an important role to play in promoting cultural and linguistic diversity in the region. “Arabic, Kurdish, Syriac or Armenian-language journalism, whether print, visual or audio, is important for developing a multicultural society,” she said.

Khaled al-Qassem, a photojournalist who works for several foreign agencies in Raqqa, agreed, saying that linguistic diversity was already present in the media. “There are radio and TV stations, newspapers and online publications that come out in the various mother tongues in the region,” he told Al-Monitor. “In Raqqa, there is Arabic-speaking BISSAN FM, whose programs mainly cover the cultural and social life of Raqqa, Deir ez-Zor and Tabaqa and highlight art expos and festivals. In Amouda city, Arta FM broadcasts its programs online in Kurdish, Arabic, Syriac and Armenian. Almost all stations broadcast music in all the languages of the region.”

Boutan told Al-Monitor that female journalists have a strong presence in Rojava. “Women journalists have successfully covered battles in Raqqa, Deir ez-Zor, Manbij and Kobani, among others. They have also succeeded in managing media platforms. Arta FM has been managed by program presenter Shirine Ibrahim since 2014 and it is a success.”

Boutan noted that the region also has an all-women radio station. JIN FM has been broadcasting from Amouda since 2014. “It was the first all-women station broadcasting in Kurdish. JIN means ‘women’s station’ in Kurdish. The station launched the all-women JIN TV on March 8, 2018, on International Women’s Day," she said.