An all-volunteer group of local and international journalists and researchers established the Rojava Information Center in the Autonomous Administration in northeastern Syria to ensure that events there are reported internationally through their own work as well as by assisting established foreign outlets report from the region. 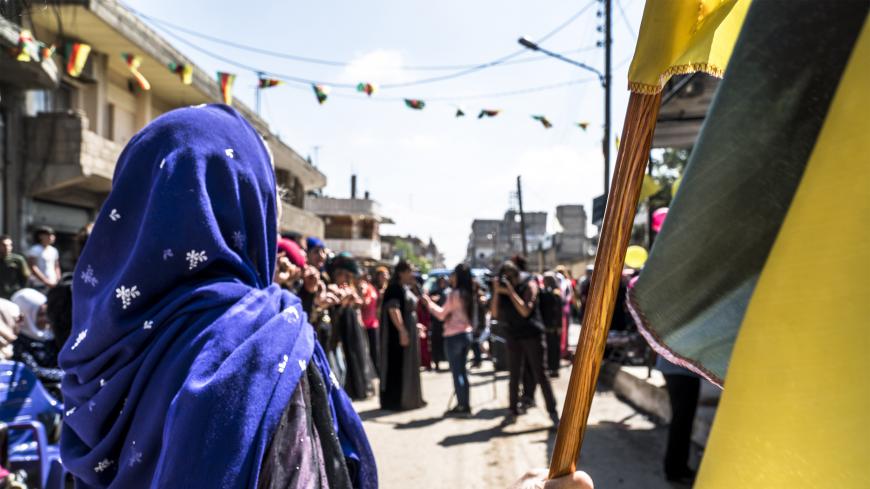 QAMISHLI, Syria — “I didn’t want to come to Syria for two weeks and then leave,” Thomas McClure, a young freelance journalist from Manchester, England, told Al-Monitor. “I was interested in northeastern Syria’s political project. I wanted to do more research and to contribute to the media field.” To that end, McClure, along with Joan Garcia, Koni Docolomansky and Chloé Troadec, co-founded the Rojava Information Center (RIC), an independent media organization celebrating its one-year anniversary this month.

When in December 2018, President Donald Trump declared victory against the Islamic State (IS) and announced a US pullout of troops from the area, McClure and his colleagues felt that another war might soon erupt in the area. In January that year, Turkish armed forces had launched Operation Olive Branch in majority-Kurdish Afrin, which had been under the control of the Syrian Democratic Forces (SDF).

“At that time, I wasn’t in Syria, but we knew there was little [media] coverage and less than 10 members of the foreign press covering the war in Afrin on the ground,” McClure said. “After Trump’s announcement in December, we thought we had to soon start work, and so we opened the office with our own small resources.”

The goal of RIC is to provide journalists, researchers and the general public with accurate, well-sourced and transparent information from on the ground in northeastern Syria under the political control of the Autonomous Administration of North and East Syria (NES), a de-facto autonomous area better known as Rojava, its Kurdish name. Arab-majority regions outside Rojava, including Raqqa, Manbij and Deir ez-Zor, are also under NES administration.

“Our desire is to build a bridge between Syria and the world outside and explain [in depth] the dynamics and daily life of the people living here, not only politicians and militaries, but also teachers, civilians, people working in the local administrations,” McClure said. The three colleagues quickly learned the Kurdish language, and some local journalists soon joined their project, including Ahin Bahoz, who is originally from Amude, a town near Qamishli, in Hasakah province.

“Before joining RIC, I worked in the communications field with a local women's organization,” Bahoz told Al-Monitor. “I chose to work with the RIC because it’s an independent center that is capable of accurately representing the reality here in northeastern Syria and has become a point of reference for the foreign press.”

A number of other international and local media journalists joined the all-volunteer team, and within a year, RIC had contributed to media investigations and reports produced by the BBC, CNN, AP, RFI, Daily Mail and other outlets.

While a student in the United States, Robin Fleming had been following the Syrian political situation since the start of the civil war, and when she heard RIC was looking for more English speakers, she saw her opportunity to go to Syria.

“We all work together — Arabic, Kurdish and English speakers — in a very collaborative atmosphere,” Fleming told Al-Monitor. “Of course, in the past months I experienced many terrible things, but also, very positive others, like when I witnessed the reconciliation committee in Ras al-Ain/Serekaniye, which organized the meeting of two local tribes, Kurdish and Arabic, which were in conflict. Instead of [retribution], they came together and kissed each other. It was really amazing. Sadly, today Ras al-Ain/Serekaniye is occupied by the Turkish forces’ local allies from the Syrian National Army, and the reconciliation committee doesn’t exist anymore.”

For security reasons, the RIC doesn’t like to give precise info about staff numbers or the location of their office, but the team continues to expand. Typically one team or two operates in the field — at the moment covering Turkey's Operation Peace Spring and its consequences — while another team works in the office, producing reports, coordinating the team and assistance to outside journalist and translating interviews and stories.

To finance RIC, members of the team produce and sell video footage, serve as translators and organize appointments and interviews for foreign journalists coming to the area. They also provide some of these services free of charge because they want all journalists, not just those from television broadcasters that can pay well, to have access to information and direct contact with local people.

“There is a unique media perspective here,” McClure said. “Northeastern Syria enjoys freedom of the press both for international and local media. Of course, a lot still needs to be done to achieve full press freedom, but compared with the rest of Syria, here it’s quite unique.”

Many local media outlets — among them DeirezZor 24 and Euphrates Post and Kurdish opposition news websites like Rudaw and Kurdistan24 — post reports in multiple languages and have set up offices in the area in addition to having Facebook pages and radio stations.

“After 2011, when the Syrian civil war began, there were many difficulties,” Bahoz told Al-Monitor. “Many necessities for life were lacking due to the war. At the same time, I have seen a new political project begin, which focuses on trying to create a place where all nations, ethnicities and religions can live together in equality. My work with RIC is mostly translating from Arabic to Kurdish as well as photography. I expect to see the RIC continue working in the coming years and to grow.”

Of note, RIC staff researched, wrote and published “Bringing ISIS to Justice: Towards and International Tribunal in North East Syria,” a report explaining the legal precedents for establishing an international court in which to try Islamic State prisoners held in the NES region and proposals for the structure of such a court.

“When the Turkish attacks on Ras al-Ain/Serekaniye and Tal Abyad began, we were ready and able to follow the war situation closely,” said Ferhat Eris, a Kurdish-Iranian student who conducts research for dossiers and has helped build a network of contacts. “Now that the situation has become more calm, we are using this calm to conduct deeper research on the effects of the war on the society and civilians.” Eris hopes that he and RIC have seen the last offensive that needs to be reported.