Farmers in northeast Syria are concerned about making ends meet — or even having a place to live — after the Turkish offensive led to the looting of their lands and destruction of their crops. 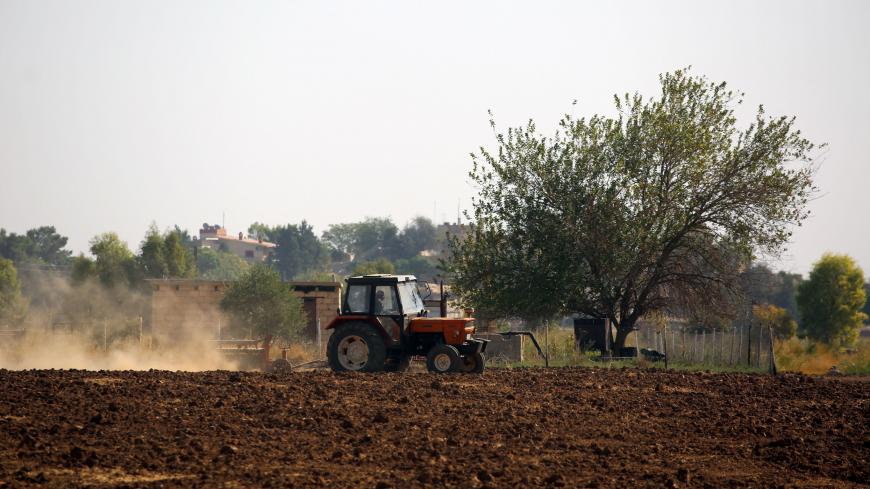 A man farms in the village of Qahtaniyah, northeastern Syria, Oct. 5, 2016. - DELIL SOULEIMAN/AFP via Getty Images

HASAKAH, Syria — Syrian farmers are suffering under the invasion of Turkey and its loyal armed Syrian factions against the Kurdish-Arab Syrian Democratic Forces (SDF).

Following Turkey's Operation Peace Spring, which it launched in early October, farmer Sipan Ahmad said Syrian opposition factions seized house and his cotton fields — the only source of income for his family in Ras al-Ain (Serekaniye), in northeastern Syria.

The violent Turkish airstrikes against Ras al-Ain forced civilians to flee. Farmers, Ahmad included, left without harvesting their cotton. “The Turkish military operation began just as the first phase of the cotton harvest was starting,” Ahmad told Al-Monitor on Dec. 18 at the Washo Kani camp for internally displaced people in rural Hasakah province.

Syrian National Army opposition factions affiliated with Turkey are accused of looting the homes and silos of wheat of civilians in Ras al-Ain. They also have been accused of other human rights violations.

"[They] seized homes where families and displaced people from Aleppo, Idlib, Ghouta and Homs were staying. They took over our cotton fields. We farmers lost our crops, our properties and our homes, and we were displaced to camps that can't provide for basic needs,” he added.

On Dec. 19, local sources in Hasakah revealed to a reporter for SANA, the Syrian state news agency, that the Turkish state brought in 300 people whom the sources described as “terrorists,” along with their families, to Ras al-Ain via buses, to seize locals' homes and properties and displace them to bring demographic change to the area.

On Dec. 17, North Press Agency said the Turkish army and its Syrian allies looted grain silos in Sharkrak village in the countryside of Tell Abyad city. The Syrian Observatory for Human Rights, an England-based war monitoring group, reported Dec. 19 that Syrian opposition forces transported grain from the Sharkrak silos to Turkey under the eyes of Russian forces stationed in the area.

Farmers whose lands are near the international highway also worry about losing their livelihoods.

On Dec. 17, Muhyiddin Faisal, a farmer who was plowing his land to plant wheat and barley near the strategic international M4 highway in Tell Tamr, told Al-Monitor he's concerned the battles will get closer to his land and force him to flee.

Turkish jets continue to bomb the countryside of Ain Issa camp and the village of Umm Harmala in the area of Zarkan/Abu Rasin, and the villages of Kfifah and Qazali near Tell Abyad.

On Dec. 19, the head of the Kurdish autonomous administration’s grain authority, Salman Bardo, told Al-Monitor, “Medical facilities, schools, markets, factories, cotton gins and ovens were destroyed by the Turkish invasion with opposition fighters in the cities of Tell Abyad and Ras al-Ain." The Turkish army and its Syrian factions seized an estimated 6 million dunams (almost 1.5 million acres) of agricultural land, 5,000 tons of fertilizer, about 130 factories and seven cotton gins, along with grain silos, he said.

​Bardo pointed out that the Syrian factions also had seized nearly 3,000 tons of cotton, attacked wheat fields and stolen crops, and Turkish aircraft bombed wheat warehouses in Ain Issa during their military operation.

“Turkey is preventing farmers from cultivating their lands adjacent to the Turkish border in al-Darbasiyah, Ain Diwar and Kobani … while the armed Syrian groups cut trade routes, which caused great losses in the agricultural sector,” Bardo added.

Lack of security on the road between Kobani, Raqqa and Hasakah kept the cotton crop from reaching gins, most of which are now out of service, as the general manager of the cotton department in the Kurdish autonomous administration, Ahmed Yunis, told Al-Monitor by phone Dec. 20.

“Five gins have stopped working as battles intensified in the Ras al-Ain countryside, Tell Abyad, Ain Issa and Tell Tamr. Only one gin in Hasakah and the one in Deir ez-Zor started operating again, but they are under a lot of pressure to operate since the rest of the gins went out of service,” Yunis added.

Hasakah farmer Abd al-Rahman Musa told Al-Monitor Dec. 19, “My brother and I suffered heavy losses during the wave of unusual fires that devoured wheat fields in late April, and we were hoping to make up for it with our cotton crops, but we fear we may not make profits once again since there are only two gins operating now.”