The Syrian opposition’s interim government is trying to prevent the smuggling of strategic crops, namely wheat, from its areas of control, amid a global food crisis resulting from the Ukraine war. 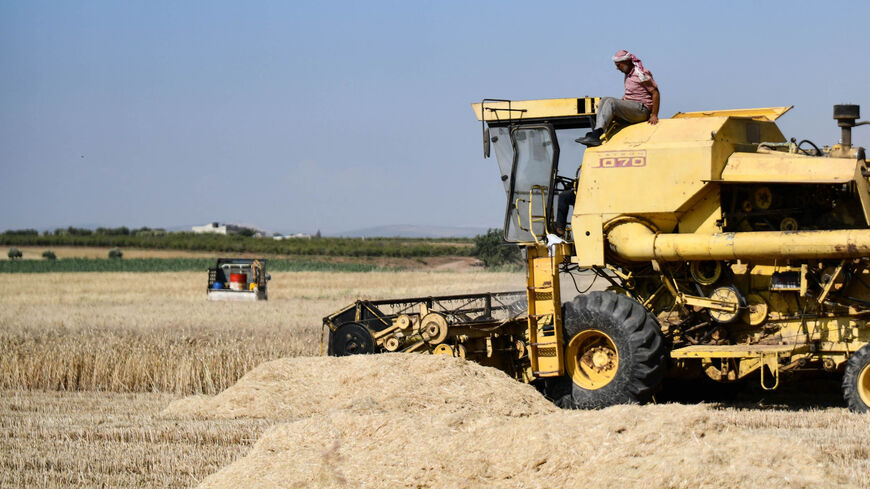 A farmer harvests wheat with a combine machine, in the countryside of the northwestern city of Afrin in the rebel-held part of Aleppo province, Syria, June 8, 2022. - Rami al-Sayed/AFP via Getty Images

ALEPPO, Syria — The Syrian opposition's self-styled interim government in north Syria has been recently working on a plan to purchase large quantities of grains, namely wheat, from local farmers with the aim to boost stocks needed to produce bread. The move is intended to partially reduce the effects of the global food crisis and the risks linked to wheat imports amid the deteriorating economic situation in north Syria.

Syria ranked among the 10 most food insecure countries in the world this year, according to the United Nations. In a February report, the UN said that 12 million people suffer from limited or unsustainable access to food.

In its 2021 annual Country Report Feedback, the World Food Program said that three out of five Syrians suffer from food insecurity given the continuous rise in food prices and the deterioration of the Syrian economy.

With the beginning of each harvest season in Syria, the competition to buy wheat crops from local farmers escalates between the Syrian regime, the Kurdish-led Autonomous Administration of North and East Syria, and the Turkish-backed Syrian opposition. Each party sets a higher price to buy the crops, which gives merchants the opportunity to sell to the party that pays the higher price.

As for the interim government, it has not yet determined the purchase price of wheat in its areas of control in north and northwestern Syria.

Over the past years, the Syrian regime has been receiving large quantities of wheat from the areas of control of the opposition in northwestern Syria. The quantities are smuggled by traders linked to the Turkish-backed Free Syrian Army (FSA), which uses smuggling corridors widely spread on the battlefronts with the regime in the countryside of Aleppo. During these years, the interim government was neither able to buy wheat from farmers nor prevent smuggling. It depended on flour imported through Turkey to produce bread.

On May 19, the interim government issued a decision to ban the export of strategic crops. In a statement, it prohibited the export or transport of any of the strategic crops, primarily the wheat crops, outside the liberated Syrian lands (under the opposition control).

The statement explained that this decision was due to the global food crisis aggravated by the spread of the coronavirus pandemic and more recently the Russian war on Ukraine.

The statement continued, “The concerned ministries, namely the ministries of defense, interior, local administration and finance, were instructed to take all necessary legal measures to ensure the implementation of the [ban] decision, the issuing of directives, and the pursuit of efforts to prevent crops from being smuggled out of the liberated areas. Deterrence measures are to be imposed on violators."

Nazih Kaddah, assistant minister for agriculture affairs in the interim government, told Al-Monitor, “The implementation of the decision requires awareness and concerted efforts by all concerned parties and the need to preserve strategic crops, especially wheat, to achieve food security in the liberated areas.”

He said, “This year, there is a decrease in the areas planted with wheat that can be harvested. A large part of the rain-fed areas were grazed. Meanwhile, each party bears a historical responsibility to maintain food security. Farmers are citizens of this country and have a duty to implement the government’s decision and not to allow the exit of strategic crops in any way. There is an obligation to implement the government's decision across border crossings.”

Kaddah added, “The Syrian Public Establishment for Grain [affiliated with the interim government’s Ministry of Finance and Economy] also has a duty to purchase the largest possible amount of crops [from farmers] at a competitive price.”

Abdel-Hakim al-Masri, minister of finance and economy of the Syrian interim government, told Al-Monitor, “The government has formed two committees — one in the eastern Euphrates region [Ras al-Ain and Tal Abyad] and the other in the northern and northeastern Aleppo countrysides — to present proposals for the pricing of wheat for the current season.”

He said, “The wheat price will be set as soon as the two committees submit their proposals on pricing, in light of international changes and global prices, while taking into account the cost to the farmer.”

Masri noted, “In the event of insufficient production, we will import. The interim government will buy quantities of wheat from Ras al-Ain and Tal Abyad. It will then transport them in transit through Turkey to be then transferred to opposition areas in the countryside of Aleppo.”

He added, “Production in the western Euphrates region is low in comparison to the east where the crops receive more irrigation. Officials of the agricultural directorates of the interim government estimated a production between 40,000 and 50,000 tons of wheat in the areas of Tal Abyad and Ras al-Ain.”

It seems the decision to ban the export of strategic crops from opposition areas cannot be implemented if the interim government does not set a higher purchasing price for wheat than the price set by the Syrian regime. If the purchasing price is low, grain, especially wheat, will be smuggled to regime areas through traders close to FSA leaders.

Many FSA commanders have in recent years taken up smuggling of goods toward regime-held areas. Others export goods to Turkey, where they buy other products that they would sell in their own areas of control at prices that are lower than local products.

Meanwhile, some FSA leaders are also involved in trade, importing cement, iron, clothing and other commodities. These leaders take advantage of their positions at the official crossings on the border between northwestern Syria and Turkey. Some also benefit from their relations with officials at the smuggling corridors that are spread on the frontlines with the Syrian regime forces.