The Syrian government in Damascus is competing with the opposition government in the northwest to buy wheat, facing increased demand and high prices. 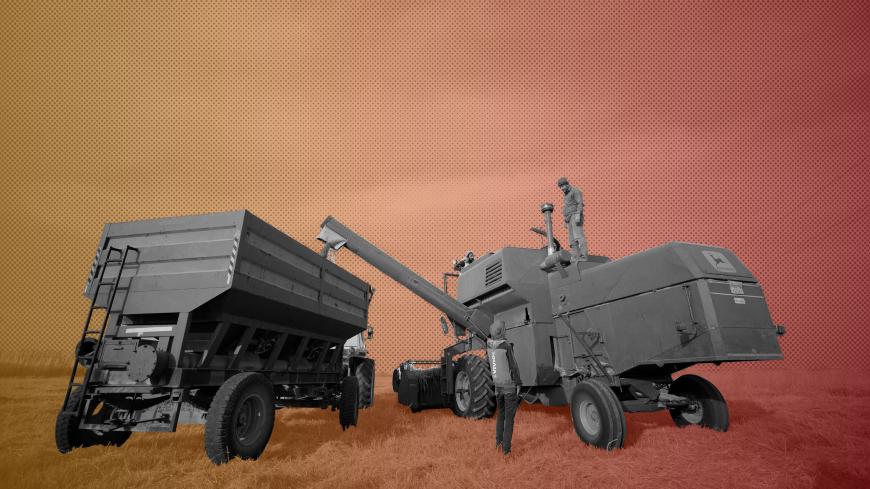 As wheat harvest season in Syria approaches, the regime and the opposition are separately setting up new pricing plans, hoping to get farmers to sell to them amid fears of a worsening shortage of domestic and imported supplies. These supplies are critical to ensuring food security for the populations in their respective areas of control.

The government's General Establishment for Cereal Processing and Trade (Hoboob) announced in early March it had been unable to close new wheat deals for 2020 because of high wheat prices, logistical difficulties, and expensive freight charges and freight insurance due to sanctions imposed on Syria. The government, normally the exclusive importer of wheat, in late March gave its approval for all industrialists and merchants to import wheat flour for bread.

Prior to this decision, the government had sought to acquire the entire wheat crop, competing with the opposition in northwestern Syria.

The Syrian Cabinet set the purchase price of a kilogram (2.2 pounds) of hard (durum) and soft wheat from farmers in the current season at 200 Syrian pounds (roughly 16 cents), plus a bonus that brought the total price to 225 Syrian pounds (18 cents). This reflects an increase of 21.6% compared with 2019, and amounts to a “major government subsidy for the agricultural sector and wheat crop,” Agriculture Minister Ahmed Qadri told al-Watan newspaper March 16.

According to the Ministry of Agriculture, about 70% of planned wheat cultivation for the current season has been reached out of a target of 1.8 million hectares (4.45 million acres). The majority of the cultivated areas are concentrated in Hasakah province, followed by Aleppo.

In March, Hoboob announced its intention to purchase 200,000 tons of Russian, Bulgarian or Romanian wheat. The freight operation is supposed to be completed within two months of signing the contract.

During the past two years, Syria imported more than 2 million tons of wheat from Russia, Eastern European countries and the Black Sea region. Previously, it would achieve self-sufficiency at an annual production rate of 4 million tons, part of which would be allocated for export.

At the end of the 1990s and the beginning of the 2000s, Syria exported some of its wheat to Italy and other countries in exchange for soft wheat. Syria also exported flour to Iraq from 2004 to 2006.

However, in 2018, production hit its lowest level in 29 years, falling to 1.2 million tons. The United Nations Food and Agriculture Organization (FAO) attributed this to “an extended period of dry weather early in the cropping season followed by heavy out-of-season rains.” FAO added, “The conflict in Syria has also damaged vast farming areas, displaced thousands of Syrian farmers and triggered a sharp increase in the cost of agricultural inputs.”

Independent economist Samir al-Tawil in France told Al-Monitor, “The emerging coronavirus crisis in Syria heightened Syrians’ fear and increased the demand for bread. This … led to the emergence of a black market for bread.”

Tawil said that to reduce demand, the government could lift subsidies on bread and increase the loaf prices.

He also noted, “By recapturing new areas from the opposition, the government is forced to provide greater supplies of flour for bakeries in these areas. Consequently, this upped the value of its wheat import bill in dollars.”

The Syrian Public Establishment for Grains, affiliated with the opposition-led government, intends to price wheat purchases from farmers in opposition-controlled areas after it develops a plan to determine production costs by May. The 2020 harvest season will take place this year in May and June. Hassan al-Mohammad, director of the agency based in Gaziantep, Turkey, told Al-Monitor, “Expectations currently indicate the price will vary between $230 and $240 per ton of durum wheat, and between $225 and $230 per ton of soft wheat." He noted the great shortage in the opposition areas of Aleppo and Idlib.

Mohammad pointed out that rainfall, especially in March, boosted production figures. However, “there are still large areas in Syria suitable for growing wheat that have yet to be cultivated, due to the lack of production [necessities] and fertilizers,” he added. “This reflected negatively on the country's supplies of flour and caused Syria as a whole to suffer a wheat shortage.”