War in Ukraine pushes Egypt to ramp up wheat production

The Egyptian government is working to increase local wheat production to reach self-sufficiency, after the Russian war on Ukraine added many challenges to secure the country's needs for food security. 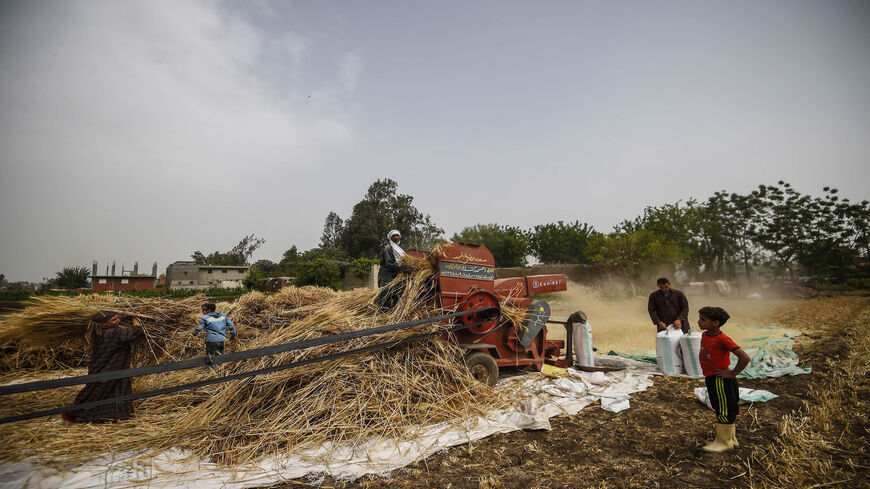 CAIRO — The Russian war on Ukraine has stirred Egypt’s fears and concerns of failing to secure its needed wheat imports. In 2021, 80% of Egypt’s wheat imports came from Russia and Ukraine.

The Egyptian government has been applying policies aimed to secure a safe rate of local wheat to meet 70% of the local needs and reduce reliance on imports. These policies have proved to be efficient in the current local wheat harvest season.

Before the start of the current agricultural season for the wheat crop in November 2021, Egypt’s government had set the procurement price at 820 Egyptian pounds ($44.60) per ardeb (331 pounds) for wheat bought by the government from local farmers, an increase of 15% over the previous year.

Amid the international tension caused by the Russian invasion of Ukraine and its repercussions on Ukraine’s wheat exports, President Abdel Fattah al-Sisi decided to grant an additional incentive to farmers, bringing the price of local wheat to 885 Egyptian pounds ($48) to encourage them to supply the largest possible amount to state storage silos. The move is expected to compensate for the deficit from the delay of any shipments of imported wheat.

Reda Mohamed Ali, head of the National Wheat Campaign at the Ministry of Agriculture and Land Reclamation, told Al-Monitor, “The current year registered the highest levels of production and supply of local wheat. The government is applying policies aimed to expand wheat cultivation and raise productivity per feddan [1.04 acres] within the scope of Egypt’s Vision 2030. These policies have already begun to bear fruit, as the area planted with wheat increased by 260,000 feddans [270,000 acres] this year to reach 3,654,000 feddans [3.8 million acres]. This is in addition to an increase in productivity per acre by using and developing new varieties that are resistant to drought, insects and salinity.”

He added, "The climate conditions in the winter season this year were ideal for the wheat crop. Thanks to these new policies, we might reach the safe rate by producing 70% of local needs and reducing dependence on imports.”

Mohamed Ali explained, “Setting the procurement price of wheat from farmers had a significant impact on encouraging farmers to grow wheat. Also, the ministry’s intensive national campaigns during the last period raised farmers’ awareness on the use of modern irrigation methods, which greatly boosted productivity. Domestic production of wheat this year reached its highest level of nearly 10 million tons.”

He continued, “Egypt's annual wheat needs are estimated at 18-20 million tons. It may be difficult to achieve full self-sufficiency, but expansionary policies in wheat production can achieve a safe rate by producing 70% of local needs.”

Egypt's Vision 2030 with respect to agriculture has a set of goals to expand the cultivation of wheat. It includes vertical expansion by maximizing productivity per feddan using new varieties of wheat with high productivity and modern irrigation methods. It also includes horizontal expansion by planting new lands outside the valley and the delta regions, using varieties of wheat suitable for the nature of these lands and those that can adapt to different climatic conditions, salinity and drought.

The rate of domestic demand for wheat in Egypt, whose population exceeds 103 million, remains the highest in the world. Egypt annually consumes the equivalent of 18.5 million tons of wheat, while the per capita share reaches 182 kilograms (401 pounds) annually. According to the latest official statistics, the self-sufficiency ratio of wheat, which is the value of domestic production to the volume of consumption, stands at 40.8%. Moreover, indicators show an increase of domestic production volume during the current agricultural season to 10 million tons, nearly 60% of which are supplied to the government storage silos. This comes in tandem with unprecedented government financial incentives to encourage farmers to sell their produce to the state.

In November 2021, the Egyptian government launched the National Project of Silos aimed to develop and modernize the existing silos for local and imported wheat and build new ones while at the same time reducing waste rates, with a total storage capacity of 4.5 million tons.

Commenting on the government’s measures in view of the widening food gap in the wheat crop, Ahmed Galal, dean of the Faculty of Agriculture at Ain Shams University, told Al-Monitor, “Setting the procurement price of wheat is the main incentive that the state used to encourage farmers to grow wheat as a profitable crop and supply it to the state silos instead of selling to other buyers. This provided the state with a good alternative in light of the repercussions of the Russian-Ukrainian war.”

He said, “Despite the government's attempts to raise local wheat production, the large increase in the volume of local consumption remains a major challenge. The individual's consumption of wheat exceeds the global average by more than 100 kilograms [220 pounds] per year. Bread is the most important food item in Egypt and Egyptians call it ‘aish,’ Arabic for 'life.'”

Galal argued that the vertical expansion policies in planting new areas with wheat have to take into account the sufficiency of water resources for agriculture and climatic conditions. “It is not possible to dispense with other crops in the valley and the delta in exchange for wheat cultivation, as there are other strategic crops such as rice and corn,” he noted.

The agricultural sector in Egypt consumes around 85% of Egypt’s share of the Nile water, estimated at 55.5 billion cubic meters annually. In light of the government expansions in the agricultural sector and the adoption of new national projects, the state resorted to several programs to enhance water use efficiency and adopt modern methods of field irrigation. The state is also increasing its reliance on nontraditional water sources such as desalination of seawater and wastewater reuse.

According to statements by Minister of Water Resources and Irrigation Mohamed Abdel Aty, Egypt’s water use efficiency reaches 85%, the highest rate in Africa.

The government’s attempts to expand wheat cultivation depend on its ability to provide remunerative prices incentivizing farmers to grow wheat and supply it to the state at a time when the prices of production inputs have doubled, causing farmers to grow food items with higher returns.