Egypt to receive wheat shipments from Ukraine by rail from Poland

Cairo agreed with Kyiv on four wheat cargoes, which will reach Egypt by rail to Poland, raising hopes of restoring food security. 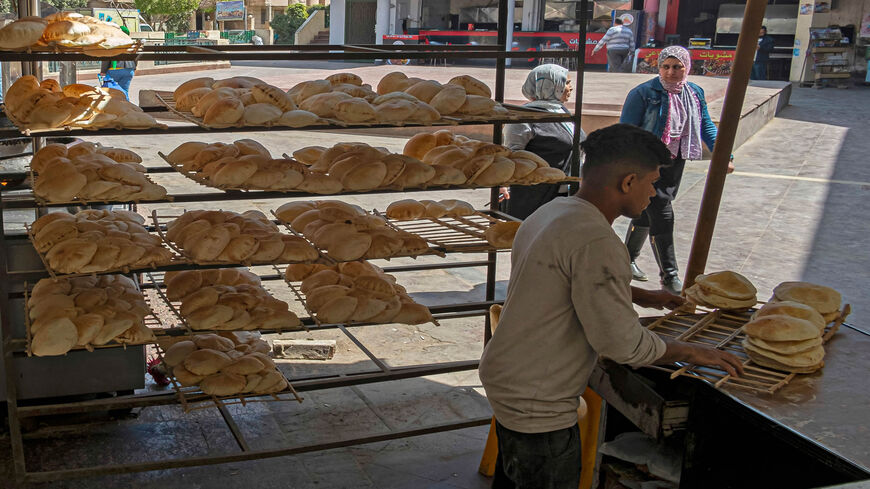 CAIRO — Egyptian Minister of Supply and Internal Trade Ali Moselhi announced May 17 that four wheat cargoes were contracted with Ukraine, in a step described as a breakthrough in the provison of foodstuffs in Egypt.

Speaking on the sidelines of the opening of the International Exhibition for Grain Industry Technology and Equipment Mills in Nasr City, Moselhi said that the Ukrainian side proposed transferring the cargoes from Ukraine to Poland by railway, and then to Egypt.

The minister, however, did not mention the quantities of each shipment that Egypt would receive.

With the closure of Ukraine’s ports due to the Russian military operations, Kyiv is considering to export wheat stocks across its borders with Romania and Poland by rail — an expensive operation in an attempt to save stocks and make room for new produce.

Amid the ongoing Russian war on Ukraine that erupted Feb. 24 between the two largest wheat exporters in the world, fears of an imminent global food crisis continue to loom.

During their meeting in Germany May 14, the G-7 warned that the war in Ukraine is fueling a global food and energy crisis that threatens poor countries.

Egypt is at the forefront of wheat importers, with an annual consumption of more than 20 million tons. The country's local wheat production is expected to reach 10 million tons this year, which prompted Cairo to import the remainder of its needs from Russian and Ukraine.

The resumption of wheat exports from Kyiv constituted a major breakthrough for Egyptians who consume bread with every meal, not to mention the use of wheat for sweets, baked goods and other domestic uses, which makes its provision a matter of national security for Egypt.

Egypt used to import a large part of its wheat needs from Ukraine, which resulted in understandings between the two sides over the past years in this regard.

Ukraine produces a large share of the world’s supply of wheat. Therefore, the resumption of Kyiv’s exports is seen as a major economic step to providing food security for many countries around the world, not only Egypt, according to Rashad Abdo, an Egyptian economist.

In light of the ongoing Russian-Ukrainian war, Egypt turned to India as an alternative for wheat imports, which produces some 108 million tons of wheat annually.

Cairo has so far imported 50,000 tons of wheat from New Delhi, despite the Indian Ministry of Commerce’s decision to ban wheat exports due to the severe heat wave that hit the country and impacted domestic production, causing local prices to increase.

Abdo, who is also the head of the Egyptian Forum for Economic and Strategic Studies, told Al-Monitor, “Resuming wheat imports from Ukraine will have a significant positive economic impact on Egypt, which is one of the biggest wheat importers in the world.”

He added, “For Egyptians, securing a loaf of bread is tantamount to food security."

Commenting on Egypt’s map of wheat cultivation and annual consumption, Reda Mohamed Ali, director of the Field Crops Institute at the Agricultural Research Center affiliated with the Ministry of Agriculture, said that Egypt attaches great importance to wheat crops and is working on increasing production.

He told Al-Monitor that in 2021, wheat-cultivated lands accounted for 3.4 million feddans (3.5 million acres), with a productivity of 9 million tons.

Meanwhile, in 2022, wheat-cultivated areas stretched over 3.7 million feddans (3.8 million acres), with an expected productivity of 10 million tons by the end of the year.

Egyptians consume 12 million tons of bread loaves annually, while consumption of baked goods and sweets made of wheat makes up 8-10 millions tons a year.

This brings Egypt’s total wheat consumption to 20-22 million tons annually, which could rise with the population increase.

“Cairo has a reserve stock of local wheat that could suffice until the end of 2022 only,” Ali said.

During a speech at the inauguration ceremony May 21 of Egypt's Future Project, in the presence of Egyptian President Abdel Fattah al-Sisi, Moselhi spoke about the national wheat silos project.

“The total area of storage capacity has now reached 5.2 million tons of wheat, while we consume 800,000 tons per month. Therefore, we seek to achieve 65% self-sufficiency soon,” he said.

Commenting on the four wheat cargos coming from Ukraine to Egypt, Ali said that both Kyiv and Moscow export a third of the world’s need of wheat and meet between 50% and 70% of Egypt's consumption needs.

Consequently, the resumption of Kyiv’s wheat exports to Cairo is a major step for the Egyptian government to provide food security amid the world’s current circumstances as a result of the Russian-Ukrainian war, which caused wheat prices to increase globally and led to high inflation rates in several countries.

“With the outbreak of the war, Egypt has been looking for alternatives for the Russian and Ukrainian wheat. Talks are underway with France, Kazakhstan and Argentina for wheat purchases during the coming period,” he said.

Tawfiq noted, “The Egyptian government has drawn up a plan that aims to provide a safe minimum of its wheat needs, by securing 65% to 70% of our wheat consumption, by increasing cultivated areas, which is expected to have a produce of 5 million tons.”

He said that this step will not affect the rest of the crop lands, as these will be new areas based on the reclamation of new lands, such as the Toshka project, Farafra, New Delta and East al-Owainat.

“The plan also aims to reduce the loss and waste of wheat by maintaining barns and silos on a timely basis and building new silos to accommodate the increase in the wheat-cultivated areas,” he added.

Tawfiq concluded, “The plan also includes increasing the productivity per feddan. Over the past years, productivity jumped from 20 ardab to 26 ardab, with 1 ardab of wheat weighing 150 kilograms (330 pounds). This could happen by educating farmers about modern farming techniques, coupled with the Ministry of Agriculture’s incentives to provide them with high-productivity seeds. All these points are included in the plan to achieve self-sufficiency in wheat by 2030.”