To contain the repercussions of Russia’s invasion of Ukraine, Egypt banned for three months the export of wheat, flour, rice, pasta, oils and beans. 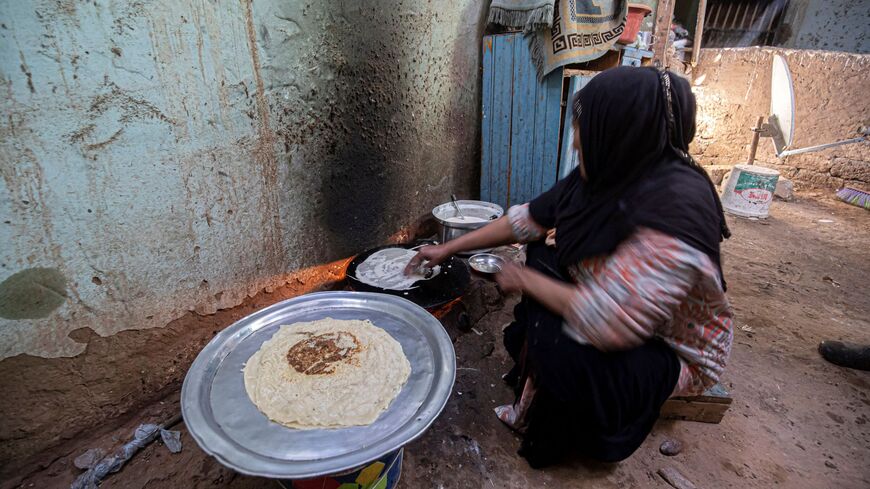 Umm Abdo prepares bread for the family in her home at Zerzara village on the west bank of the Nile river, off of Egypt's southern city of Aswan, on Feb. 26, 2022. Russia's invasion of Ukraine could mean less bread on the table in Egypt, Lebanon, Yemen and elsewhere in the Arab world. - KHALED DESOUKI/AFP via Getty Images

The ongoing war between Russia and Ukraine, the world’s two largest wheat exporters, is threatening food security in many countries, especially in the Arab region.

In a report published on March 12, the ministry said that Egypt is planning to increase the wheat-cultivated area across the country, which equalled 360 million feddans this year, with the aim to produce locally 10 million tons of wheat this year.

In light of the ongoing Russian war on Ukraine and the ensuing hike of global wheat prices, the Egyptian Ministry of Trade and Industry has banned for three months the export of some key staples as part of the government’s efforts to ensure food security and protect the local wheat reserves. The three-month ban came in two separate decisions issued on March 10 and 12.

The affected products include fava beans, lentils, pasta, wheat and flour of all kinds, edible oils of all kinds, ferik (a type of green durum wheat) and corn, according to an official statement published on the Facebook page of the Egyptian cabinet.

In the cabinet’s statement, Minister of Trade and Industry Neveen Gamea said the ban came in full coordination with the Ministry of Supply and Internal Trade as part of the state's plan to secure basic commodities.

More recent data from CAMPAS revealed the total value of Egyptian exports in November 2021. The export of soybeans for example reached $19.217 million, while pasta exports amounted to $6.515 million.

Rashad Abdo, an economic expert and head of the Egyptian Forum for Economic and Strategic Studies, praised Egypt’s decision, saying it is a logical measure applied by several countries to secure the basic food needs of their populations in times of war.

“The Egyptian state must take additional measures to control prices of goods, prevent manipulation by merchants and counter monopoly,” Abdo told Al-Monitor. "It must also hold more fairs for the provision of basic commodities at affordable prices for all citizens," such as the ‘Supermarket and Ahlan Ramadan’ exhibitions that began March 15.

In a message of reassurance, the Egyptian cabinet published on its official Facebook page on March 14 a report showing the rates of self-sufficiency of various basic food commodities.

On the timing of the export ban decision knowing that Egypt is the world’s largest wheat importer, Abdo explained, “Before the ban was issued, there were no measures or laws that prevented a ban on the export of local wheat to achieve self-sufficiency. This is why many private Egyptian companies exported local wheat abroad.”

“At one point, Egypt would import wheat at prices lower than its local price," Abdo added. "This prompted the government to import most of its needs and allow large traders from the private sector to export local production. Now the state will purchase all the local production of wheat to meet its own needs.”

Abdo further said that the Egyptian government has recently asked farmers to commit to the sale of their wheat to the government, while imposing fines on those who violate the decision. “Russia and Ukraine are the largest exporters of wheat to Egypt, and no one knows how long or how far the war will go on between them. Egypt is turning to its current local production of wheat as a safe haven in these difficult circumstances.”

Egypt's consumption of wheat is 18 million tons, a figure that is likely to go up in view of the annual population increase, according to the report. In the last year, about 50% of Egypt's wheat imports came from Russia and 30% from Ukraine.

Former Egyptian Minister of Irrigation Mohamed Nasr Eldin Allam told Al-Monitor that the ban decision is enough to secure the Egyptian needs in wheat in light of the current global crisis resulting from the Russian war.

He stressed, however, that the ban on the export of wheat does not mean that Egypt has a surplus of wheat to be exported, saying Egypt imports nearly 60% of its wheat needs. He said the ban rather aims at preventing any attempts by the private sector to export Egyptian wheat abroad in any way possible in order to preserve the local production and prevent any price manipulation.

On March 24, Egyptian Minister of Supply and Internal Trade Ali Moselhi announced in a press conference that Egypt is currently in talks with France, Argentina, India and the United States for importing wheat in the future.

Meanwhile, the Egyptian cabinet announced on March 16 an increase in the prices of wheat of 65 Egyptian pounds ($3.57) per ardeb (which equals 150 kilograms), with the total price of one ardeb of wheat reaching 865 Egyptian pounds ($47.4). The move comes as part of additional incentives to encourage local farmers to sell their wheat to the state.

In this vein, Allam said the Egyptian government needs to buy wheat from Egyptian farmers at a fair price so as to expand wheat cultivation and achieve self-sufficiency. “The ban should not be limited to a period of three months. The government ought to permanently prevent the export of any basic commodity and only allow it after achieving self-sufficiency. Only the surplus should be exported,” he noted.

Russia topped the list of the 10 countries from which Egypt imported wheat during the first 11 months of 2021 with Egypt importing 4.2 million tons at $1.2 billion from Moscow, representing 69.4% of Egypt's total imported wheat. Ukraine came in second, with 651,400 tons, worth $649.4 million, accounting for 10.7% of total imports.

Ibrahim Ashmawy, the assistant minister of supply and internal trade, said in televised statements on March 13 that Egyptian citizens annually consume the equivalent of 182.5 kilograms of wheat, divided into five loaves per day, and that a quarter of a billion bread slices are produced daily.

On March 30, Gamea announced a new decision banning the export of some types of scrap (iron, zinc, stainless steel, and copper in all forms), raw materials and paper pulp for a period of six months.

Ibrahim al-Sigini, Assistant Minister for Economic Affairs, explained in a statement that the decision came in response to requests by the Chamber of Engineering Industries and the Chamber of Metallurgical Industries about the losses suffered by the companies in the field due to the lack of scrap and the high prices locally.

He pointed to the importance of scrap metal in achieving industrial and economic development, as it is one of the alternative raw materials for basic raw materials.