Egyptian President Abdel Fattah al-Sisi ordered the implementation of a megaproject to cultivate 1 million feddans west of the Nile Delta in Lower Egypt. The project, dubbed New Delta, aims to create modern agricultural and urban communities as well as industrial complexes that operate in the field of agricultural production. 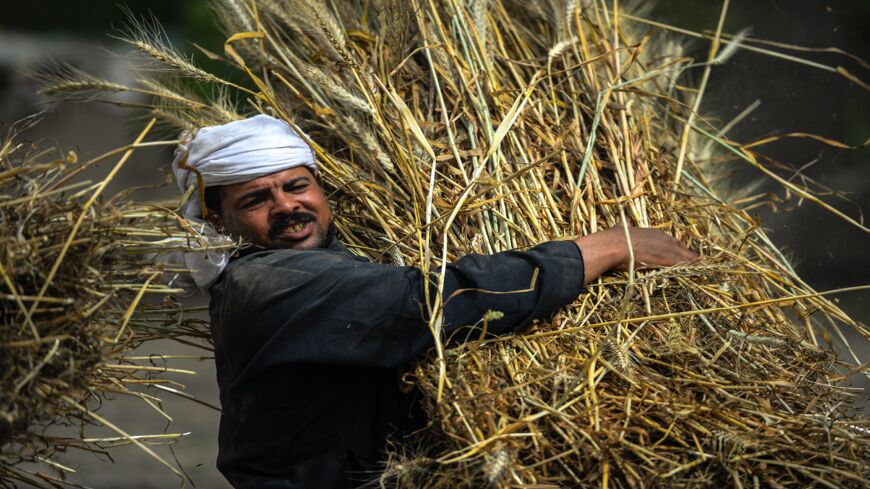 An Egyptian farmer harvests wheat in Saqiyat al-Manqadi village in the northern Nile Delta province of Menoufia in Egypt, on May 1, 2019. - MOHAMED EL-SHAHED/AFP via Getty Images

The Egyptian government plans to implement a megaproject to cultivate over 1 million feddans (one feddan equals 4,200 square meters), in a move aimed to boost food security in the Arab world’s most populous country.

President Abdel Fattah al-Sisi held a meeting on March 28 to discuss the implementation of the project dubbed the New Delta. According to a presidential statement, the giant project, west of the Nile Delta in Lower Egypt, is part of government plans to create new agricultural and urban communities characterized by modern administrative systems.

Presidential spokesperson Bassam Rady said the project along the Dabaa Axis on Egypt’s northwest coast will encompass industrial complexes based on agricultural production and create thousands of new jobs.

“The New Delta project is the future of Egypt. It will be implemented in two years,” Sisi said in statements during his visit to the Suez Canal Authority’s Maritime Training and Simulation Center in the canal city of Ismailia. The visit was part of the Egyptian celebration of refloating the giant container ship Ever Given, which ran aground in the Suez Canal on March 23.

A country with a population of more than 100 million people, Egypt has had cultivated land of 10.3 million feddans by 2019, according to the state statistics agency CAPMAS.

“The New Delta is one of the giant projects that will increase the cultivated area in Egypt by more than 1 million feddans,” Minister of Agriculture Al-Sayed Al-Qusair told the local Sada Al-Balad TV. “The new cultivated lands will be planted with strategic crops such as wheat, corn and vegetables.”

With the new project, the Egyptian government hopes to secure adequate food products for its growing population. “The project basically aims to achieve food security, fulfill the growing needs of the increasing population to foodstuffs and reduce dependence on imports of strategic foodstuffs,” Prime Minister Mustafa Madbouly said on March 31.

In January, the Egyptian government unveiled a project dubbed Egypt’s Future for Agricultural Production to cultivate 500,000 feddans on Egypt’s northwest coast. Authorities say the project aims to provide high-quality agricultural products at reasonable prices, bridge the gap in the local market between production and imports, and provide foreign currency for the national economy.

Speaking to Al-Monitor over the phone, Nader Noureldeen, professor of soil sciences and water resources at Cairo University, believes the two projects will help bridge the food gap in Egypt.

“Egypt imports around 65% of its needs of strategic crops, and these two promising projects can help provide a big share of Egypt’s food needs,” he said.

Noureldeen added, “Egypt has a big food gap, and these projects could help achieve self-sufficiency of the country’s food needs and reduce by one-third the bill of food imports, which amount to $15 billion annually.”

With the completion of the project, the Egyptian government hopes to increase its agricultural exports. “The New Delta project is close to population centers and represents a great opportunity through which we can increase the Egyptian exports due to the region’s proximity to the main ports on the Mediterranean Sea,” said Mohamed al-Qersh, a spokesperson for the Agriculture Ministry.

He said the New Delta project will create thousands of jobs for Egyptian youths. “We are talking about more than 5 million job opportunities, not only in the field of agricultural production but also small and medium enterprises that serve youths and contribute to creating job opportunities for them, which will benefit the Egyptian state in general,” he added.

Egypt’s agricultural sector contributes to the country’s gross domestic product by 14%, representing 28% of job opportunities and 55% of employment in the countryside.

In 2020, Egypt exported 5 million tons of agricultural products, according to the Central Administration for Agricultural Quarantine of the Agriculture Ministry.

Sayed Khalifa, the head of the Farmers Union, the independent guild of Egypt’s farmers, said food security is a major security issue for the Egyptian government.

“Since he came to power, the Sisi administration has embarked on a series of national projects with a view to achieving food self-sufficiency whether in terms of agricultural expansion, silo cultivation, animal production or fish farming,” Khalifa told Al-Monitor over the phone.

He said the new lands in the New Delta project will largely be allocated for the cultivation of oil crops. “The location of the new project is unique given its proximity to main roads, which will guarantee an easy access of the agricultural products to the local market and to export any surplus via the Port of Alexandria or airports.”

Khalifa said the Egyptian government is building two wastewater treatment plants, each with a capacity of 6 million cubic meters/day to secure enough water for the cultivation of the new lands on the northwest coast.

He continued, “The two plants will give a major boost to Egypt’s efforts to expand in the implementation of agricultural projects in light of the limited water resources in Egypt.”