Starting with an extra 250,000 acres, Egypt plans to cultivate 2 million more acres of wheat within two years, to ensure food security, especially after the outbreak of war between Russia and Ukraine, from which Egypt imports the majority of its wheat. 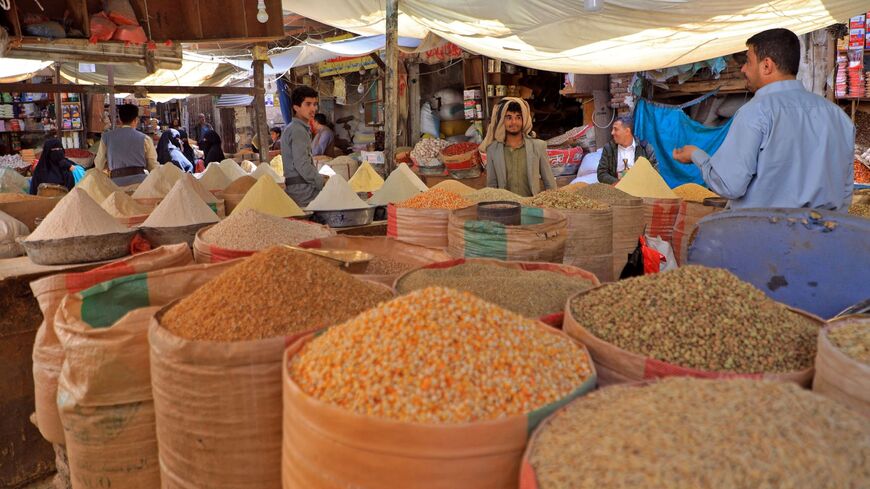 Yemenis shop at a market in the war-torn Yemeni capital Sanaa, on Feb. 28, 2022. Russia's invasion of Ukraine could mean less bread on the table in Egypt, Lebanon, Yemen and elsewhere in the Arab world. The region is heavily dependent on wheat supplies from the two countries which are now at war. - MOHAMMED HUWAIS/AFP via Getty Images

CAIRO — Egyptian President Abdel Fattah al-Sisi announced on Feb. 23 that Egypt has so far succeeded in planting an additional 250,000 acres of wheat, which will be increased to 1 million acres by next year, and 2 million the year after.

This endeavor is part of the government’s efforts to ensure Egyptian food security, especially after the outbreak of the war between Russia and Ukraine, from which Egypt imports the majority of its wheat.

Prime Minister Mostafa Madbouly convened a cabinet meeting on Feb. 23 to discuss the brewing Russian-Ukrainian crisis. He stressed that the government would work to diversify its wheat supply.

On Feb. 24, Russian President Vladimir Putin launched a military operation against Ukraine. As a result, the global prices of gas and wheat have significantly increased. Egypt is one of the largest importers of wheat in the world, and mainly depends on both Moscow and Kyiv for its supply.

Madbouly noted during the cabinet meeting that the country has sufficient reserves of wheat for four months, and is awaiting the start of the new local growing season in April, stressing that the government is ready to import from other countries if need be.

According to the Central Agency for Public Mobilization and Statistics (CAPMAS), Egypt is one of the largest importers of wheat in the world, and 80% of its supply is from Russia and Ukraine. Egypt consumes up to 21 million tons of wheat, around 13 million tons of which are imported.

Experts who spoke to Al-Monitor said that increasing Egypt's wheat crop is a positive step toward achieving food security.

Hussein Abu Saddam, head of the Egyptian Farmers’ Syndicate, told Al-Monitor that Egypt is currently cultivating the largest area of wheat in its history at 3.6 million acres, which is equivalent to a third of Egypt’s agricultural area. “Crop production will thus increase and exceed 10 million tons, which would provide around 50% of the country's needs, and is a step forward to reduce dependence on imported wheat.”

He added that 22 types of high-production, disease-resistant varieties are increasing productivity. The average acre produces from 2,700 to 3,000 kilograms of wheat, he noted, and using modern silos has helped reduce waste from levels of over 15%.

But to achieve self-sufficiency, he said, Egypt would need over 6 million acres, which is more than half of the country’s agricultural area. This task is difficult, he said, but the plan is a positive step to ensure food security in light of the challenges from the Russia-Ukraine war, climate changes, or the outbreak of the COVID-19 pandemic.

Mohammed Suleiman, head of the Agricultural Research Center, told Al-Monitor that the the Russian-Ukrainian war will harm Egypt's wheat supply. But even earlier, he said, climate change and the pandemic had "prompted Cairo to search for unconventional solutions," starting with local cultivation.

Suleiman noted that the government is required to raise the purchase price of wheat from farmers to motivate them to supply larger quantities. Farmers will need to work both for horizontal expansion (increasing the cultivated area) and vertical expansion (producing more wheat from the same amount of land).

The government must also provide high-production, disease-resistant varieties while increasing storage capacity, according to Suleiman.

Rashad Abdo, head of the Egyptian Forum for Economic and Strategic Studies, told Al-Monitor that the search for self-sufficiency in strategic commodities, particularly wheat, is very important, especially in light of global developments.

He pointed out that Egypt’s population is constantly increasing, and with it, wheat consumption.

Abdo called on the state to draw a clear strategy, search for non-traditional solutions, benefit from countries with successful experiences, and resort to technological innovations to increase food security.