Over the past three months, Egypt has bought 3.5 million tons of wheat from local farmers as it works to achieve self-sufficiency and weather the effects of the global crisis caused by the Russian war on Ukraine. 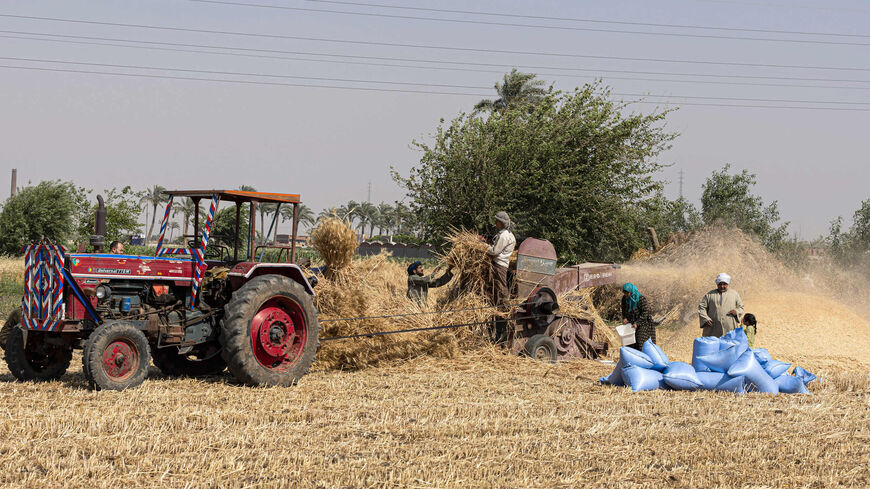 As the Russian war on Ukraine rages on, Egypt has bought 3.5 million tons of wheat from local farmers since the start of the current fiscal year that began in July.

In a statement to Al-Monitor, Egyptian Minister of Supply and Internal Trade Ali Moselhi said that the local wheat purchase season ended with the purchase of a total amount of 3.5 million tons from farmers who were not affected to a large extent by the coronavirus pandemic, noting that Egypt’s strategic wheat reserves cover about 6.3 months.

The Russian-Ukrainian war that has been ongoing since February has largely disrupted global wheat supplies and raised global prices to record levels. Egypt was particularly affected, as it is the world’s largest importer of wheat — most of which came from Russia and Ukraine.

In April, Egyptian President Abdel Fattah al-Sisi demanded that the authorities boost the country’s strategic reserves amid concerns about global supplies due to the coronavirus pandemic and Russian-Ukrainian war, prompting the General Authority for Supply Commodities (GASC), Egypt’s state grain buyer, to dip into the global market for wheat while the local harvest was ongoing.

According to a GASC statement, which Al-Monitor viewed, the Egyptian government has purchased 465,000 tons of wheat since July, out of which 175,000 tons were bought from Russia, 240,000 tons from Romania and 50,000 tons from Bulgaria.

This deal marked the largest wheat purchase by the GASC since the start of the war in Ukraine.

Commenting on the expansion of local wheat cultivation and achieving self-sufficiency, Moselhi said that Egypt is proceeding with steps to encourage farmers to expand wheat cultivation, stressing that the indicative price of a wheat ardeb (331 pounds) will be 1,000 Egyptian pounds ($51) for the next season.

Moselhi said that farmers across the country have been excluded from a night curfew imposed to limit the spread of the coronavirus to allow them to harvest their crops without any interruption.

Commenting on the impact of climate change on wheat cultivation, he noted that Egypt has taken great steps over the past eight years to prevent the sector from being completely affected by climate change through more reliance on clean energy that works on reducing carbon emissions.

Moselhi explained that the state's projects to reclaim millions of acres in the desert and build thousands of greenhouses contributed to maintaining Egyptian food security in large proportions.

“This is not to mention the national project to establish modern wheat silos, which increased the storage capacity of wheat to nearly 4 million tons as energy storage, after it did not exceed 1.2 million tons before 2014,” he added.

Egypt consumes about 20 million tons of wheat annually, and usually imports about 12 million tons, according to Moselhi.

Despite the government statements that Egypt has achieved self-sufficiency of wheat and other basic commodities, the exacerbation of the dollar shortage crisis, which broke out at the beginning of this year, has affected the import of basic commodities for Egyptians, namely wheat.

On Sept. 28, Egypt’s Chamber of Cereals Industry sent letters to the ministries of supply, trade and industry, as well as to the central bank, informing them that 80% of the private sector mills had stopped working.

According to the letter, some 700,000 tons of wheat intended for the private sector in Egyptian ports and ready for disbursement to importers is pending payment in dollars — a measure that the banks have not taken so far, as they are not releasing payments in hard currency.

The chamber demanded the intervention of government agencies to speed up the release of dollars to resume work in the mills.

According to the chamber’s letter, the amount of wheat that entered Egypt for the benefit of the private sector from Sept. 1 through Sept. 26 did not exceed 3,000 tons.

The letter also indicated that between Sept. 7 and Sept. 26, no wheat was procured to the private sector mills (72%), except for limited quantities that did not exceed 3,000 tons at most.

Member of parliament Tarek Hassanein, chairman of the Chamber of Cereals Industry and board member of the Federation of Egyptian Industries, commented on the letter, telling Al-Monitor, “In spite of that, and despite all the obstacles and crises, the government represented by the Ministry of Supply and Internal Trade succeeded in taking proactive steps in order to secure a strategic stock of all basic commodities, especially wheat designated for the production of subsidized bread, under the directives of President Sisi.”

He noted, “These steps have led to the absence of any crises in the markets so far, at a time when major countries witnessed a shortage of goods and food products throughout the coronavirus pandemic and also as a result of the Russian-Ukrainian war."