Egypt is importing unprecedented quantities of wheat, despite a recent expansion in cultivated lands and wheat cultivation, raising doubts about the feasibility of the government's plans to achieve wheat self-sufficiency. 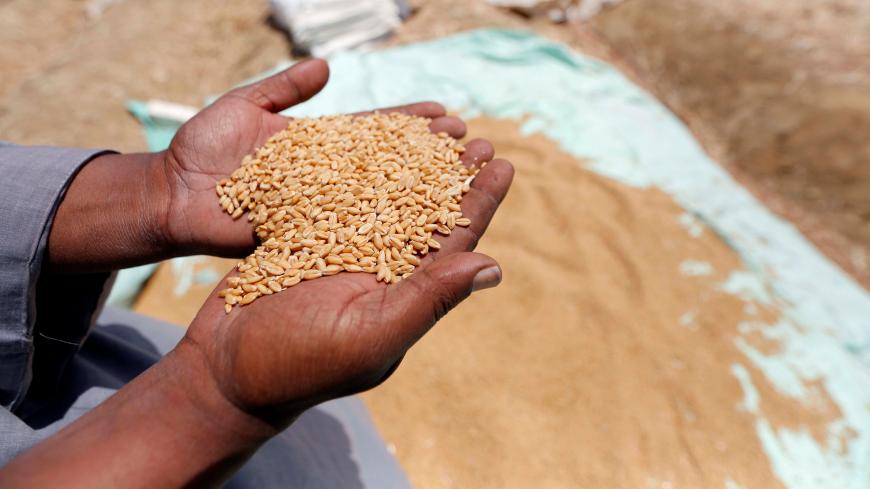 An Egyptian farmer holds a handful of freshly harvested wheat grains during the launch of the government's local wheat harvest at a field in Beni Suef, Egypt, April 24, 2017. - REUTERS/Amr Abdallah Dalsh

CAIRO — The spokesman of Egypt's Ministry of Supply, Mamdouh Ramadan, in an attempt to reassure citizens, told Reuters Aug. 22, “Egypt’s wheat reserves are sufficient to cover the country’s needs until the end of February 2018.”

On the same day, Mohammed Suwaid, the media adviser of the Ministry of Supply, said during a talk show on satellite channel ONTVLive, “The reserves are safe and exceed the global limit.”

However, it seems that the officials boasted about the wheat reserves in an attempt to reassure Egyptians, without addressing the price paid to obtain these strategic reserves. Indeed, the Ministry of Supply procured record quantities of imported wheat in July, which by the end of the month reached about 1.245 million tons supplied to Egypt through four tenders.

On Aug. 17, Ramadan announced in a press statement that the General Authority for Supply Commodities (GASC) affiliated with the Ministry of Supply signed a contract through a state tender to purchase 355,000 tons of Russian and Ukrainian wheat, bringing the total wheat imports to 1.6 million tons.

GASC had launched two state tenders, on Aug. 15 and Aug. 29, to import unspecified quantities of wheat from global suppliers in September and October 2017, raising doubts about the achievement of the government's wheat self-sufficiency plan over the last four years, as outlined by President Abdel Fattah al-Sisi in May 2013.

In October 2014, the Ministry of Agriculture announced that it aimed to increase the wheat cultivation area by 200,000 acres to reach 3.5 million acres in 2015. This is in addition to the wheat cultivated by the armed forces and the ministry as part of the 1.5 million acres reclamation project launched by Sisi in the city of Farafra on Dec. 30, 2015. The Ministry of Supply started purchasing wheat harvested from this project on April 12, 2017.

Sisi's wheat self-sufficiency plan is also based on a successful experiment by the National Water Research Center of two wheat planting seasons, in February and September, rather than only one in December. The experiment consists of cooling dry wheat seeds before planting them in the soil, so they can withstand the heat during hot periods, thus enabling two consecutive harvests per year.

However, doubts shroud the self-sufficiency plan, especially as Minister of Supply Ali Meselhy announced during a July 29 press conference a plan by the ministry to import 7 million tons of wheat in 2017-18, despite the increase in the wheat cultivation area and the double planting season.

The undersecretary of the Egyptian parliament's Agriculture Committee, legislator Raef Tamraz, told Al-Monitor, “The Ministry of Supply is showing a delay in pricing wheat supply and concluding the relevant contracts. The ministry should set prices and conclude contracts for the purchase of wheat before planting it, as does the private sector.”

Ramadan said, “A large part of the contracted quantities with the farmers last year did not make it to the state silos. Deals were signed whereby some farmers got money for the wheat they were supposed to supply to the state, but which was sent to the private sector instead.”

A source at the Ministry of Supply told Al-Monitor on condition of anonymity, “The main reason for the importation of larger quantities of wheat is the government's desire to constitute greater reserves to avoid any shortage crises. The imported quantity will not be used in the fiscal year 2017-18. The state may use these imported quantities in the following year, which will reduce the wheat import bill on the 2018-19 budget.”

Nader Noureddine, a professor of water resources and irrigation at Cairo University's agriculture faculty, told Al-Monitor, “The two wheat planting seasons experiment entails a loss of millions of tons of wheat because it is not applicable to Egypt. Talking about the success of this experiment is just a media hype. The wheat planting season is in December only. Early planting in September in light of the annual rise in temperatures puts the wheat crop at risk, as this crop will probably not make it until a drop in temperature in December. Also, the crop planted in February will not withstand the heat in May and June.”

He added, “This experiment was successful in some European countries, Canada and the United States since the temperatures in these countries do not reach as high as those in Egypt.”

Egypt’s delay to achieve wheat self-sufficiency since 2013 and its importation of record quantities of wheat could be due to the corruption scandals in previous years, the poor handling of pricing and payment policies with the farmers or the attempts to create media hype about the wheat reserves.

However, the expansion of ​​cultivated lands has been praised by the experts, raising hopes that wheat self-sufficiency is attainable, as long as the state overcomes the current obstacles.