As Ukraine crisis heats up, Egypt fears for wheat supply

Egypt says the current Russian-Ukrainian crisis would not have an impact on the country's wheat supply for at least six months should wheat imports from Ukraine stop. 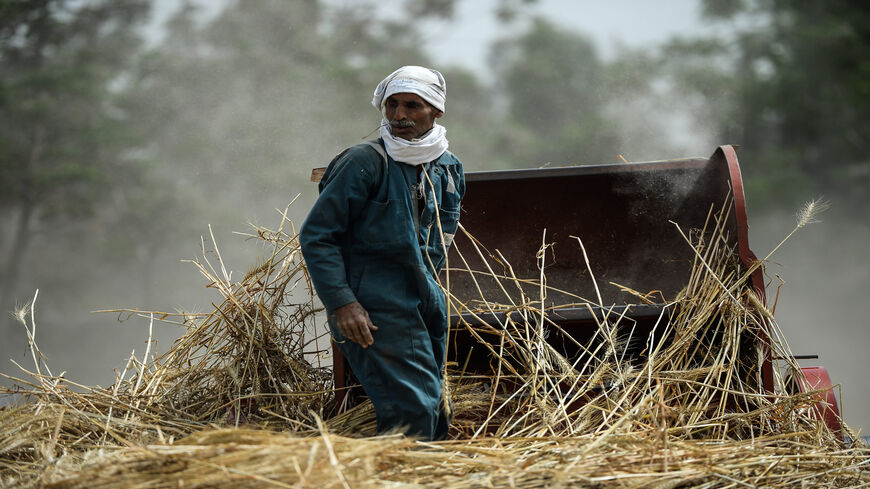 Egypt is closely following up the ongoing tensions along the border between Russia and Ukraine, amid concerns over the supply of wheat to the Egyptian market.

Moscow has been amassing thousands of troops near the border with the former Soviet republic, triggering fears of a possible Russian invasion. Russia opposes Ukraine’s accession to NATO and wants security guarantees from the West that Kyiv will not join the alliance, a request rejected by the United States.

The Ukrainian crisis was a main topic of discussion between Egyptian Foreign Minister Sameh Shoukry and his US counterpart Antony Blinken during a phone call Jan. 27.

The Egyptian Foreign Ministry said talks between the two chief diplomats dwelt on various aspects of bilateral relations between Egypt and the United States, along with exchanging views and coordination about a number of regional issues.

A statement by the US Department of State said Blinken and Shoukry exchanged views on recent developments regarding Ukraine, and issues of regional and bilateral concern.

Russia and Ukraine are major players of the global grains market, with their wheat exports accounting for 23% of global trade in 2021-22, according to the US Department of Agriculture.

Experts warn that the Ukrainian crisis will drive up global wheat prices, which will add more financial burdens on Egypt, the world’s largest wheat importer.

In 2020, Egypt imported about 12.9 million tons of wheat at a cost of $3.2 billion, according to the state statistics agency CAPMAS.

“Until now, there is no impact on wheat imports from Ukraine and Russia to Egypt,” Hussein Abo Saddam, head of the Egyptian Farmers Union, told Al-Monitor over the phone. “But if the crisis continues to escalate it will negatively affect Egypt, especially as both Russia and Ukraine are the country’s largest wheat suppliers."

Wheat exports from both Russia and Ukraine cover almost 85% of Egypt’s wheat demand. In 2020, Egypt was the largest consumer of Ukrainian wheat, importing more than 3 million tons, almost 14% of Ukraine’s total wheat production. Egypt also bought 8.9 million tons of wheat from Russia in 2020.

Abo Saddam said that Egypt will not feel the heat of the Ukrainian crisis in the near future as the country prepares to harvest its wheat production this April.

“The local harvest provides Egypt with around 9 million tons of wheat, which accounts for almost half of the country’s wheat needs,” he noted.

The Russian-Ukrainian tension has already sent up global wheat prices, going up by 7% on the Chicago Mercantile Exchange over the last two weeks. In Europe, wheat futures rose almost 6%.

“The Egyptian government was forced to increase the price of wheat for local farmers by 95 Egyptian pounds [$6] per bushel due to the rising global wheat prices,” Abo Saddam said.

But Ahmed Sheha, former head of the Importers Section at the Cairo Chamber of Commerce, downplayed worries about wheat supply to Egypt.

Sheha told Al-Monitor over the phone that Egypt’s stock of wheat and other strategic commodities is sufficient for up to six months, which will help contain any impact from the Russian-Ukrainian crisis on Egypt’s wheat supply.

“I don’t think there will be any effect on Egypt’s wheat imports from both Ukraine and Russia at present. Imports from Ukraine are still flowing into Egypt as usual and on a daily basis without any disruptions,” he said.

Last week, the Ministry of Supply and Internal Trade eased concerns about any disruption of wheat supplies to Egypt, saying the country’s wheat stock is enough for more than 5.2 months.

The ministry said it is doing everything possible to secure Egypt’s wheat needs either through local farmers or through imports via international tenders.

Sheha said Egypt still can turn to India and Brazil and other wheat-producing countries to buy wheat in case the situation escalates into a military conflict between Russia and Ukraine.