Cairo halted tenders after the steep rise in prices that followed the outbreak of war in Europe, but since June it has locked in new large quantities that also show which countries are filling the gap left by Ukraine. 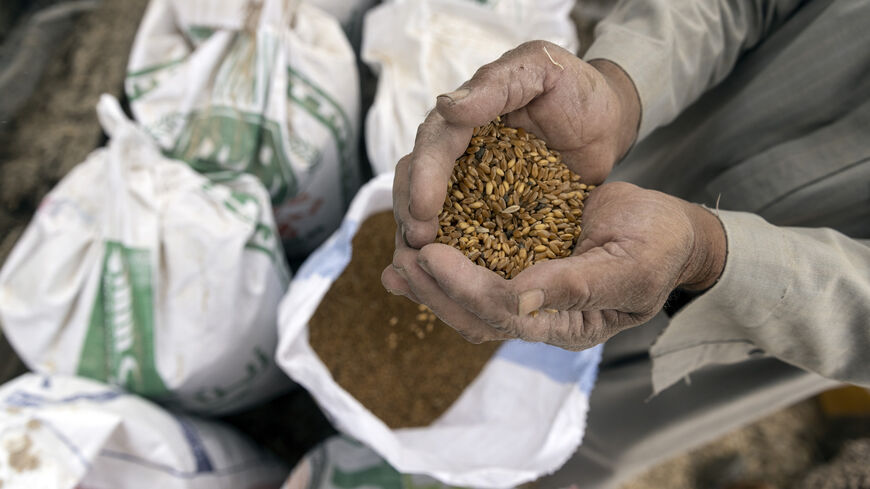 An Egyptian farmer holds harvested wheat in Qursaya island on May 16, 2022, in Cairo, Egypt. Last month, Egypt introduced price controls on commercially sold bread in response to the rising price of wheat. Egypt imports 80% of its wheat supply from Russia and Ukraine, whose production and export have been disrupted by the invasion. - Roger Anis/Getty Image

As Egypt tries to navigate the impact of the war in Ukraine on global agricultural trade, the state’s grains buyer has abandoned the caution shown during the first months after the outbreak of the conflict and returned to international markets in June in order to make up for the country’s falling wheat stocks and shore up a key part of its food security.

In total, the General Authority for Supply Commodities (GASC), which is responsible for grain procurement for Egypt’s bread subsidy program, has locked in almost 2,500,000 tons of wheat since early June, in part supported by a loan from the World Bank to bolster its food security. The purchases, which will be shipped over the next four months, included the largest single tender in a decade and show the suppliers Cairo is turning to in order to fill the gap left by Ukraine, which accounted for 22% of its wheat imports.

As a result of these latest series of purchases, which also come as Egypt struggles to secure the amount of wheat it had initially planned to obtain through local farmers, the country’s strategic wheat stocks now cover, for the first time, up to seven months, according to a government statement.

“GASC always buys enough for the food security of Egypt, and in fact, they were a little bit behind the pace compared to last year. So it was actually inevitable that they had to buy quite a big volume because they had been a little bit behind the time schedule they like to have coverage for, which is at least a six months’ supply,” said Swithun Still, an advisor to Digital Commodity Exchange (DCX), a market place for trading grains.

Before the war started, Russia and Ukraine accounted for about 30% of the world’s wheat exports, so the harsh disruptions caused by the conflict, particularly on Ukraine, pushed prices to a near-record level, according to UN’s Food and Agriculture Organization. Other factors, such as a wheat export ban by India, another major supplier, also contributed to the hike. Only recent signs of a global economic recession have cooled prices down.

For Egypt, the world’s largest importer of wheat — most of which came from Russia (60%) and Ukraine (22%) in recent years — rising prices pose a threat to its food security. To meet this challenge, the government has in recent months adopted several measures, including relaxing restrictions on the allowed moisture content of imported wheat, seeking partial substitutes to produce its subsidized bread, and banning the exports of wheat and products that use wheat. Cairo has also sought new markets that can fill the gap left by Ukraine.

In parallel, Egypt is also trying to increase its own local wheat production to become less dependent on imports, with a target of 6 million tons by August. To achieve this sum, the government has resorted to incentives, such as an increase in its purchase prices, and obligations and threats, including a requirement that local farmers supply the state with around 60% of their crop, and fines and prison sentences for those who fail to comply. To date, just over 4 million tons have been collected, up from the 3.5 million last year.

According to a US Foreign Agricultural Service report, suitable climate conditions, the expansion of the number of certified seeds distributed to farmers, ideal sowing time, new techniques and the increase in wheat acreage have allowed wheat yields per unit area to rise this year. Yet the independent news site Mada Masr has also reported that despite the government’s efforts, the contribution of the local market is lower than expected.

In mid-April, and after having had to cancel two tenders at the end of February mainly due to high prices, GASC returned to international markets for once with a tender unusually restricted to wheat from Europe. On that occasion, the agency bought 350,000 tons from France, Russia and Bulgaria, at an average price of around $490 per ton.

“We call [this] slice and dice tactics. Lowering the purchasing average by buying again and again in the fall market. The harvest time is usually a little lower,” Sven Martin, the owner of Amme & Muller GmbH, a broker for agriculture products based in Berlin, told Al-Monitor. “First and foremost, Egypt is trying to calm the country down and not let the population starve. It is also true that we have seen somewhat weaker prices, which has led to a rapid, repeated chewing,” he added.

On July 19, GASC called for a new tender to receive wheat bids only from the United States, Canada, Australia, Argentina and Brazil. Although the tender was finally canceled due to high prices, Andrey Sizov, the managing director of SovEcon, a leading firm focused on the Black Sea agricultural markets research, told Al-Monitor that it could be a message to suppliers in Europe and Russia that their prices are high.

In recent years, the main wheat supplier to Egypt has been first and foremost Russia, followed by Ukraine and then the European Union, mainly France and Romania, the US Foreign Agricultural Service report shows. Other imports of lesser importance have come from countries such as Australia and the United States.

Yet in the wake of the supply disruptions caused by the war, particularly in Ukraine, Egypt has been forced to diversify its importers. And although to date the country has approved the participation of 17 countries in GASC tenders and there have been reports about the inclusion of others such as Mexico and Pakistan, so far it has been mainly France, Russia and Romania that are filling the Ukrainian gap.

According to Al-Monitor’s calculations based on purchases made by GASC in recent months, the main wheat exporter to Egypt since the outbreak of the war in Ukraine has been France (40.5%), followed by Russia (32.6%) and Romania (19.05%). Following are Bulgaria (5.65%), and Lithuania and Germany (with 1% each).

In the near future, the sources consulted by Al-Monitor agreed that the best positioned to fill the gap left by Ukraine is Russia, while France, although it has significantly increased its exports to Egypt, will hardly be able to maintain the current pace throughout the season. Other countries that could also contribute, albeit to a lesser extent, include Romania, Bulgaria, Australia if it has a good crop, and potentially Argentina and the United States.

“We will have to wait and see what wheat is actually available in the world. However, there is no question that France will increase its share compared to previous years, and Russia will take advantage of the opportunity and continue to offer itself,” Martin said.

Still with DCX Grains also believes that Cairo will try to buy more wheat from Russia through direct tenders, as Russia is expected to have a huge crop this season but is currently subject to significant restrictions that limit its ability to trade.

The three analysts also considered that slight rises and falls in the price of wheat have less importance in GASC’s calculations than securing supply and Egypt’s food security. “The market goes up, the market goes down, GASC’s job is to secure a supply and food security for Egypt, and they had to take a significant volume to show they were doing their job. It is more important to secure the supply than to worry too much about whether you can buy better by buying later. Sometimes you do, sometimes you don’t,” Still said.