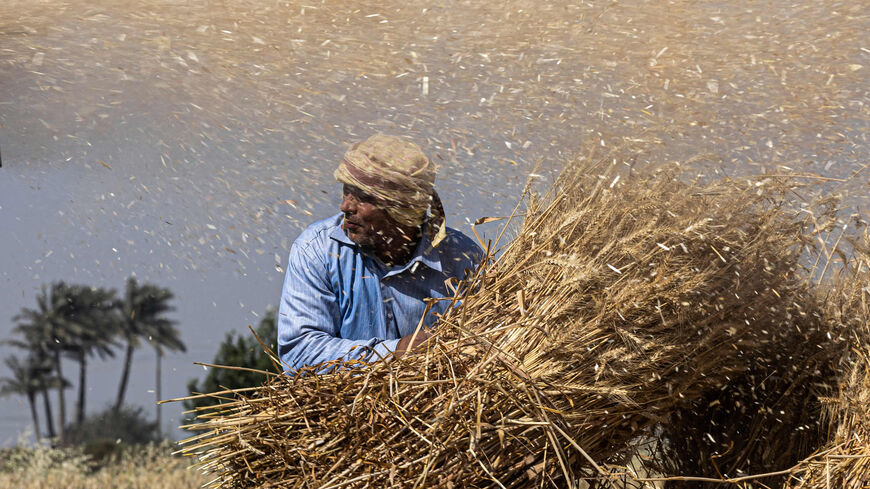 CAIRO — Egypt is pinning high hopes on the Russian-Ukrainian deal sponsored by Turkey and the United Nations on July 22, to unblock Ukraine’s Black Sea grain exports after nearly five months of fighting that halted exports. Cairo hopes the landmark deal would allow it to resume its wheat imports. The deal will allow shipments held up in Ukrainian ports to head to various countries around the world, including Egypt.

In a televised statement to Sada al-Balad channel July 27, Egyptian Minister of Supply and Internal Trade Ali al-Moselhi described the deal as a “glimmer of hope.”

He said that a vessel loaded with 63,000 tons of wheat expected by Egypt has been docked at a Ukrainian port since day three of the Russian war on Ukraine, noting that the new agreement would allow releasing the shipment.

Moselhi continued, “This shipment will move from Ukraine to Egypt through the safe route from the Black Sea ports to the Bosporus and then to the Mediterranean Sea. The Egyptian Ministry of Foreign Affairs was contacted to speed up the exit of that shipment from Ukraine.”

Egypt's wheat imports cover nearly 62% of the country's total wheat needs; about 85% of these imports come from both Russia and Ukraine, according to a document sent by the Egyptian government to the World Bank in May, in a bid to obtain financing of $500 million aimed at managing Egypt’s needs for imported wheat in light of the ongoing repercussions of the Russian war in Ukraine on global markets. The financing was approved by the World Bank in late June.

Egypt’s state grain buyer known as the General Authority for Supply Commodities signed a contract at the end of June with France, Romania, Russia and Bulgaria to buy 815,000 tons of wheat, in the largest such purchase since 2012.

Ahmed Kamal al-Attar, head of the Central Administration of Plant Quarantine, told Al-Monitor that Egypt is counting on the recent Russian-Ukrainian agreement to facilitate resuming imports of wheat from Ukraine to Egypt. “This will only happen if the deal is implemented on the ground and Russia abides by it,” he said.

On Aug. 3, Turkish, Russian and Ukrainian experts in Istanbul inspected the vessel that carried the first shipment of grain exported by Ukraine since the Russian invasion in February, before continuing its way from Turkey to Lebanon, where it will lay its cargo of 26,000 tons of corn.

Attar, however, noted, “Egypt will not send inspectors to examine the wheat imported from the Ukrainian ports until after getting sufficient assurances about the stability of the situation there. Each shipment will be examined separately. For example, shipments from a port on the Polish border are deemed to be safe and we will send inspectors to check the cargo. We will not be sending inspectors to ports within the current conflict zones.”

The Egyptian government usually sends inspectors from the Central Administration of Plant Quarantine to check wheat shipments at the port of origin before the vessels set sail.

Egypt’s Central Agency for Public Mobilization and Statistics reported in March that the country’s imports of wheat stood at $2.4 billion during the first 11 months of 2021, at a rate of 6.1 million tons. Russia topped the list of the 10 countries from which Egypt imported wheat during the first 11 months of 2021, with Egypt importing 4.2 million tons at $1.2 billion from Moscow, representing 69.4% of Egypt's total imported wheat. Ukraine came in second, with 651,400 tons, worth $649.4 million, accounting for 10.7% of total imports.

Attar added, “The strategic reserves of wheat in Egypt are safe at the present time, and there were no problems in managing the country's needs recently.”

Yemen Hamaki, professor of economics at Ain Shams University, told Al-Monitor by phone that the agreement between Russia and Ukraine brings two advantages to the Egyptian government. “The agreement will reopen the Ukrainian market to export wheat to Egypt again and reduce wheat and grain prices. This supports the Egyptian economy, given that Egypt is the largest wheat buyer in the world,” he said.

According to a Bloomberg report July 28, “Egypt canceled four cargoes of Ukrainian wheat that it contracted to buy before Russia’s invasion. … State buyer GASC scrapped the purchase of 240,000 tons for February and March delivery that never loaded in Ukraine.”

However, Mykhailo Nepran, first vice president of the Ukrainian Chamber of Commerce and Industry, told the Ukrainian Hromadske TV channel Aug. 1 that Egypt did not abandon Ukrainian wheat shipments, but would conclude a new contract to export them.

Nepran explained his country was unable to fulfill the contract in a timely manner due to the blockade of the ports. “Therefore, a completely civilized decision was made at the legislative level: to close the contract that cannot be fulfilled and open a new one, according to which the purchase will be made," he said.

A source at the Egyptian Ministry of Supply told Al-Monitor on condition of anonymity, “Egypt is counting on the success of the Russian-Ukrainian agreement, and is considering importing wheat shipments from Ukraine in the coming period, given its high quality.”

Rashad Abdo, head of the Egyptian Forum for Economic and Strategic Studies, told Al-Monitor, “The Istanbul-sponsored agreement between Russia and Ukraine on the export of grain will be beneficial to the whole world, and to Egypt in particular, which relies heavily on wheat imports from Ukraine to meet its local needs. Like any other commodity, when the supply of wheat increases prices will fall, leading to importing at lower prices.”

He said, “This step would ease the economic crisis in the country, especially since Cairo was forced to buy many shipments of wheat at high prices since the outbreak of the war between Moscow and Kiev in February.”