As Egypt’s strategic wheat reserves continue to decline, Russia and Ukraine exchanged accusations over obstructing the movement of a ship loaded with wheat and bound for Egyptian ports. 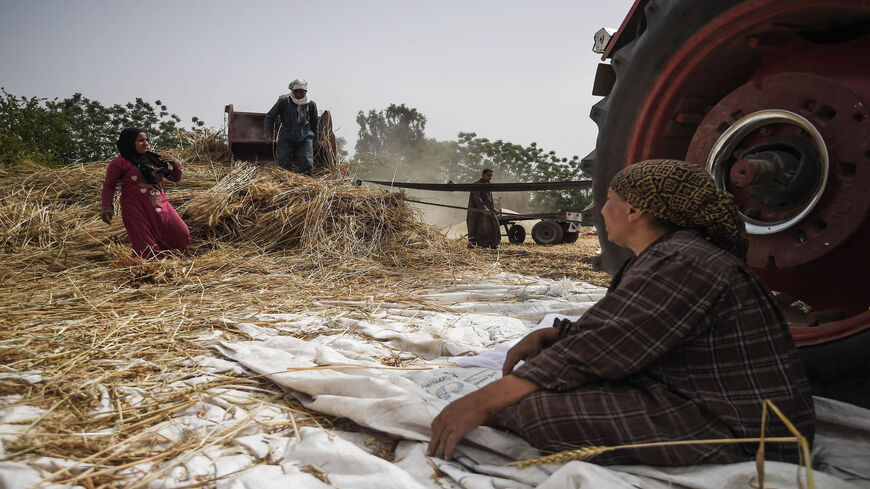 As Egypt’s strategic wheat reserves continue to decline, Russia and Ukraine have recently exchanged accusations over obstructing the movement of a ship loaded with wheat bound for Egyptian ports.

In an April 4 statement, the Ukrainian Embassy in Cairo said Russian forces present in Ukraine are preventing the EMMAKRIS III bulk carrier, which is loaded with Ukrainian wheat purchased by the Egyptian government, from heading to Cairo.

The embassy called for checking the ship’s itinerary on Marine Traffic, a ship tracking website.

The Panama-flagged ship has a carrying capacity of more than 73,000 tons.

According to the Marine Traffic website, EMMAKRIS III unloaded a shipment of goods from Russia in the Egyptian port of Damietta in February. Then, the vessel headed to Ukraine Feb. 6 and arrived at the Ukrainian port of Chornomorsk Feb. 22, two days before the Russian invasion of Ukraine.

The ship has been ready to sail to Cairo after it was loaded with goods March 16. Yet it has settled in the port of Chornomorsk and continues to be anchored in the Ukrainian port on the Black Sea.

The Egyptian authorities have not issued any official statement in this regard yet.

However, Russia denied the Ukrainian accusations. The Russian Embassy in Cairo said in an April 5 statement that the Ukrainian army is laying mines in the sea of the ports of Ochakov, Chernomorsk, Odessa and Yuzhny, with the aim of halting shipping traffic from and to ports.

The Russian Embassy noted that its naval vessels are ensuring the commercial ships’ freedom of movement through a safe humanitarian corridor that has been operating daily since March 25, but it accused Ukrainian authorities of preventing ships from leaving the ports.

It claimed that 67 ships from 15 countries are under a naval blockade by the Ukrainian side.

She said, “Now we can’t do that. Only 20,000 tons of wheat daily can cross [the] western border to get access to seaports or European Union buyers, which is far from what Egypt needs. We are trying to do more, but Russians keep the water border locked up. We [Ukraine] wish to execute contracts, but how?”

Neroba noted that Ukraine's wheat exports to Egypt for the current season (2021-22) reached around 60,000 tons, which represents only 1% of the volume of Egypt's imports this season; while Romania came first with 1.8 million tons, followed by Russia with 1.25 million tons and finally France with 1.135 million tons.

Egypt is the largest wheat importer in the world. It brought in 6.1 million tons of wheat imports in the first 11 months of 2021, according to the Central Agency for Public Mobilization and Statistics (CAPMAS).

In a report published March 6, CAPMAS said that Russia and Ukraine account for about 80% of Egyptian wheat imports.

Russia and Ukraine together export about a quarter of the world’s wheat supply, but the conflict has disrupted their production.

Russia topped the list of the top 10 countries from which Egypt imported wheat in 2021, with 4.2 million tons, or 69.4% of Egypt’s total wheat imports, with an estimated worth of $1.2 billion.

Meanwhile, Egypt’s wheat stocks have lowered in recent weeks. Government spokesperson Nader Saad said in an April 4 statement that the country’s strategic wheat reserve is enough for the next 2.6 months. The reserves in early March were sufficient for four months.

­Egypt’s state grains buyer, the General Authority for Supply Commodities, has canceled two tenders since the beginning of the Russian war due to high prices and a lack of bids. Subsequently, the government was forced to suspend international purchasing tenders for wheat shipment until at least mid-May.

Russian Ambassador to Cairo Georgy Borisenko said that his country is ready to make up for Egypt’s Ukrainian wheat imports and meet its grain needs.

During a press conference March 30 he said that Moscow is committed to all contracts agreed upon with the Egyptian side.

The Egyptian government received all the accumulated shipments of Russian wheat in March.

Russia exported about 1.7 million tons of wheat in March, or a 60% rise year on year, despite the war, according to Bloomberg. The data showed that Russia is shipping wheat at a rapid clip in the second half of March, following a slowdown in February, after resolving most of the payments and freight problems.

Payments for some shipping purchases before the war broke out at the end of February have been settled, but the Western sanctions imposed on Russia have complicated the completion of new deals.

The same applies to Egypt, where future Russian wheat shipments will find payment difficulties, after Russia was excluded from the international SWIFT network, as part of the Western sanctions on Moscow to stop the war.

The wheat harvest season in Egypt started in early April. The government seeks to fill part of the gap by purchasing 5-6 million tons of wheat from local farmers this year.

However, Neroba said that due to climate conditions, Egypt can’t increase wheat production sharply, but Egyptian millers can change some “but not all” requirements. “Bread is at the base of [the] Egyptian people’s diet. To make purchases more safe, [the] government should hedge contracts on Euronext and CBOT,” she added.

Neroba concluded, “[The] key problem is that Egypt can buy more Russian wheat or even Australian, Indian or Argentinian — the price is high because Russia for the last few years provided duty and quota — so support price increases. Russians use wheat as weapons.”