Egypt is asking the World Bank for $500 million to cover its wheat needs in light of the ongoing war in Ukraine. 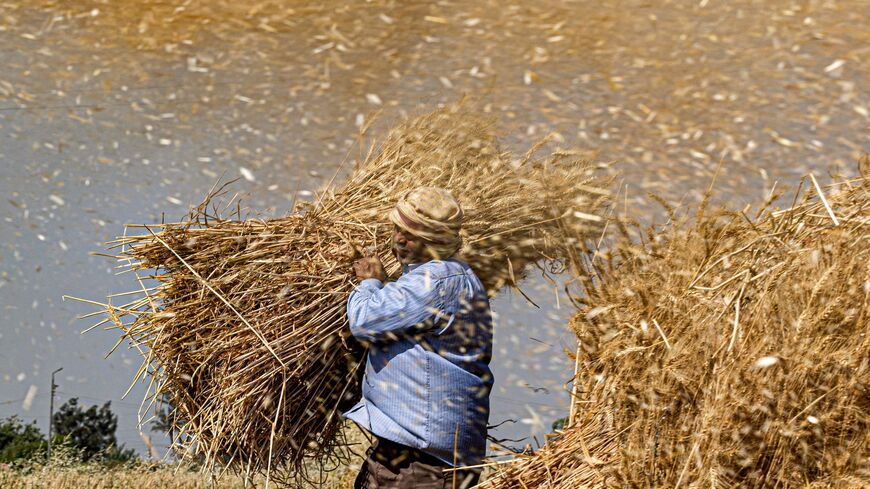 A man carries a bale of wheat during the harvest in the village of Bamha near al-Ayyat in Egypt's Giza province some 60 kilometers south of the capital on May 17, 2022. Due to wheat shortages resulting from the war in Ukraine, Egypt is harvesting locally grown wheat to ensure self-sufficiency. - KHALED DESOUKI/AFP via Getty Images

CAIRO — The Egyptian government asked the World Bank in late May to obtain $500 million to finance the Emergency Food Security and Resilience Support Program, which is aimed at managing Egypt’s needs for imported wheat in light of the ongoing repercussions of the Russian war in Ukraine on global markets.

According to a document issued by the World Bank in May regarding the program, “The immediate food security impacts of the Ukraine war are particularly pronounced on countries heavily dependent on Ukrainian and Russian grain imports. As the largest importer of wheat in the world, the Ukraine war has delivered a major shock to Egypt.”

Egypt's wheat imports cover nearly 62% of the country's total wheat needs; about 85% of these imports come from Russia and Ukraine, the document states.

It further noted that “the effect of the Ukraine war on global wheat prices has increased Egypt’s food import bill.”

The program's objective, according to the document, “is to ensure the short-term supply of wheat for uninterrupted access to bread for vulnerable households and to strengthen Egypt’s resilience to food crises.”

World Bank executive director and dean of the board of executive directors Merza Hasan told Akhbar el-Yom on June 3, “Egypt will soon obtain approval for the loan that is being negotiated with the World Bank,” without specifying a date for the expected approval.

Hasan added, “There is a frighteningly high demand from all countries of the world to get loans in general, and from the World Bank in particular, which raised concerns among financial institutions because the volume of global debt has increased significantly compared to the pre-pandemic debt levels.”

European Union (EU) Commissioner for Neighborhood and Enlargement Oliver Varhelyi told Reuters on June 1 following a visit to Cairo that the “European Commission has mobilized 75 million euros ($80.24 million) for the expansion of Egypt’s wheat storage capacity and 25 million euros ($26.75 million) for small and medium enterprises in the agriculture sector.”

Economists and observers who spoke to Al-Monitor said that Egypt plans to secure its wheat needs in the coming months in light of the ongoing Ukrainian war and its repercussions on global grain prices, especially wheat, and the lack of any immediate prospects for resolving the crisis, which puts great pressure on Egypt as the world’s largest importer of wheat to ensure it can purchase large quantities soon.

Euronews reported on June 1 that the General Authority for Supply Commodities in Egypt (Egypt's state grains buyer) is seeking to purchase an unspecified quantity of wheat through an international tender.

In mid-April, Egypt bought about 350,000 tons of wheat at high prices in a tender limited to the EU, and it is the only tender that Egypt has implemented since the war in Ukraine began in late February.

Rashad Abdo, head of the Egyptian Forum for Economic and Strategic Studies, told Al-Monitor, “The World Bank has already allocated funding to address the global food security crisis, which is one of the effects of the Ukrainian war. Thus, Egypt wants to benefit from this because it is a low-cost funding that makes up for the rise in global wheat prices, and the expected approval of the financing will greatly benefit Egypt in purchasing additional quantities of wheat.”

On May 18, the World Bank announced a set of “actions it plans to take as part of a comprehensive, global response to the ongoing food security crisis, with up to $30 billion in existing and new projects in areas such as agriculture, nutrition, social protection, water and irrigation. This financing will include efforts to encourage food and fertilizer production, enhance food systems, facilitate greater trade, and support vulnerable households and producers.”

Abdo said, “Egypt is the largest importer of wheat in the world and is committed to its obligations to the World Bank. Since the latter realizes that the Russian-Ukrainian war raised wheat prices significantly, not to mention the shortage of quantities since the supply chain was greatly affected, it is likely to provide support to Egypt to avoid a food security crisis.”

He noted, “Egypt is still in a safe position so far, especially in light of the supply provided locally and the arrival of shipments contracted by the Egyptian government during the past months, including with India, and the validity of our contract with New Delhi despite its export ban.”

Ali al-Moselhy, Egypt’s minister of Internal Trade and Supply, said in a statement on May 30 that 3.3 million tons of local wheat have been provided since the start of the current harvest season in April.

The total wheat productivity in Egypt this season is expected to reach about 10 million tons, according to a report issued by CNBC Arabia in late April.

Meanwhile, a source from the Egyptian Ministry of Supply told Al-Monitor on condition of anonymity, “With the provision of local wheat, the strategic wheat reserve will suffice until February 2023, so the situation is currently stable. However, we aim to raise this reserve in case the current [Ukrainian] crisis persists for a longer period of time.”

Ali al-Idrissi, a professor of economics at the Culture and Science City in Cairo and member of the Egyptian Society for Political Economy Statistics and Legislation, told Al-Monitor, “We are currently harvesting wheat that is grown locally, and the state aims to go beyond self-sufficiency. The situation is thus completely stable, and there is no problem with the available quantities of wheat for the current year.”

He pointed out, “However, the government is making plans for the coming period to avoid any damage to supplies in light of the ongoing war in Ukraine and the problems related to export bans by some producers such as India. These are repercussions that must be taken into account. This is why Egypt applied for the World Bank loan, which would enable us to contract quantities of wheat in order to avoid the fluctuations in wheat prices that we are witnessing recently.”

Idrissi added, “The Ukrainian war has already affected Egypt as the rise in global wheat prices has consequently affected the cost of imports, and this affects foreign exchange resources locally. Herein lies the role of major international institutions such as the World Bank to help countries such as Egypt to face this crisis.”