Egypt is seeking to secure wheat from alternative sources amid an escalated Ukrainian crisis that warns of global shortages. 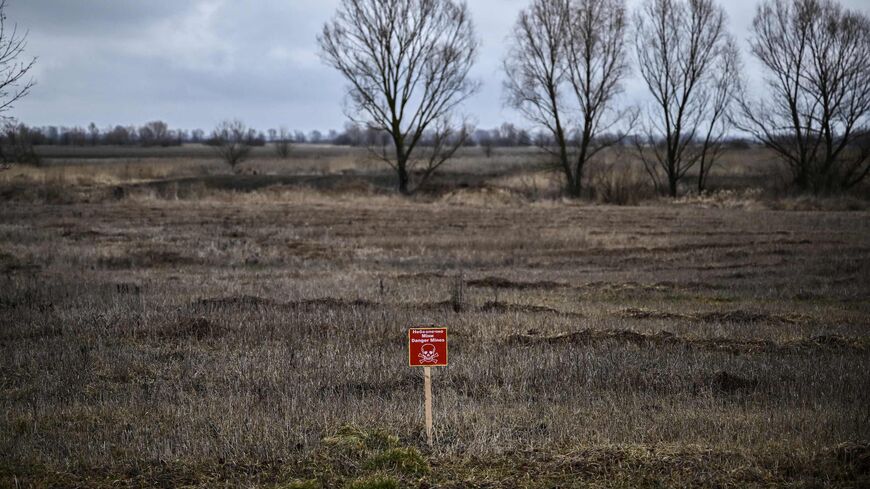 A sign reading "Danger mines" is pictured on a field at the entrance of Nizhyn, northeast of Kyiv, on March 3, 2022. - ARIS MESSINIS/AFP via Getty Images

CAIRO — The Ukraine crisis is casting a shadow across the world and many countries are increasingly concerned for their wheat imports. Egypt, the world’s largest wheat importer, has started to search for alternatives to Russian and Ukrainian wheat.

Government spokesperson Nader Saad told Mehwar TV by phone on Feb. 26 that Egypt could import wheat from 14 countries, some of which are outside Europe, and that Egypt has a strategic reserve of some five million tons of wheat in addition to its own domestic wheat production.

Wheat-consuming countries fear a global supply shortage in the coming weeks due to Ukraine suspending grain shipments following the outbreak of the war. There are also the impact of the military operations on Russia's ports and a number of Russian banks' exclusion from the SWIFT system to consider.

Russia and Ukraine account for roughly 29% of the global wheat export market.

According to the Central Agency for Public Mobilization and Statistics, Russia topped the list of Egypt's wheat import suppliers in 2021. Egypt imported 69.4% of its wheat from Russia and 10.7% from Ukraine.

Deputy Supply and Internal Trade Minister Ibrahim Ashmawy, who heads the Internal Trade Development Authority, told Al-Monitor that Egypt has no wheat shortage. He said the country's existing reserves will cover the next four months and Egypt's own wheat harvest will supply enough through the end of the year.

He added that Egypt can also still import wheat from Romania, France, the United Sates and Kazakhstan, though prices will be higher. He noted that as the largest importer of wheat in the world, Egypt is a desirable market.

World wheat prices rose to a 14-year high with the outbreak of the war, climbing to $11.34, an increase of more than 7% per bushel.

Egypt depends on wheat for its bread production and the grain is a key ingredient of Egyptian meals. Egypt produces an estimated 275 million loaves of bread per day.

Cairo has canceled two international wheat purchasing tenders in just the last week as importers have been reluctant to submit bids. Ashmawy explained that it is normal for tenders to be cancelled depending on the number of offers received from foreign companies, adding that if only one company makes an offer, the tender will be canceled.

He explained that Egypt is expanding wheat production dramatically to meet a large part of its own wheat needs.

The US Department of Agriculture's Foreign Agricultural Service post in Cairo forecasts Egyt's import needs to increase by 2.14% compared with the previous year, attributing the higher consumption to population growth.

Speaking to Al-Monitor, Ali Al-Idrissi, professor of economics at the Zewail City of Science and Technology in Cairo, said that 80% of Egypt’s wheat imports come from both Russia and Ukraine, while the remaining 20% come from other countries.

He added that there is nothing to prevent Egypt from turning to alternative markets, but prices can be expected to rise about 10%.

He explained that India is one of the best alternatives for its relative proximity and low shipping costs, and noted that Egypt already imported other commodities from India, including rice.

He said that it's unrealistic for Cairo to store large quantities of wheat before prices rise, as Egypt Egypt's storage facilities are limited. While the president has issued an edict to increase Egypt's storage capacity, it will not happen overnight.

Idrissi stressed the need for the government to prepare a wheat hedging program, a common tactic for basic commodities. He explained that these programs involve contracts to ensure stable commodity prices.