Egypt looks to India as alternative wheat source to Ukraine

Final talks are being held to send Indian wheat to Egypt, after Russia's invasion of Ukraine disrupted the global supply. 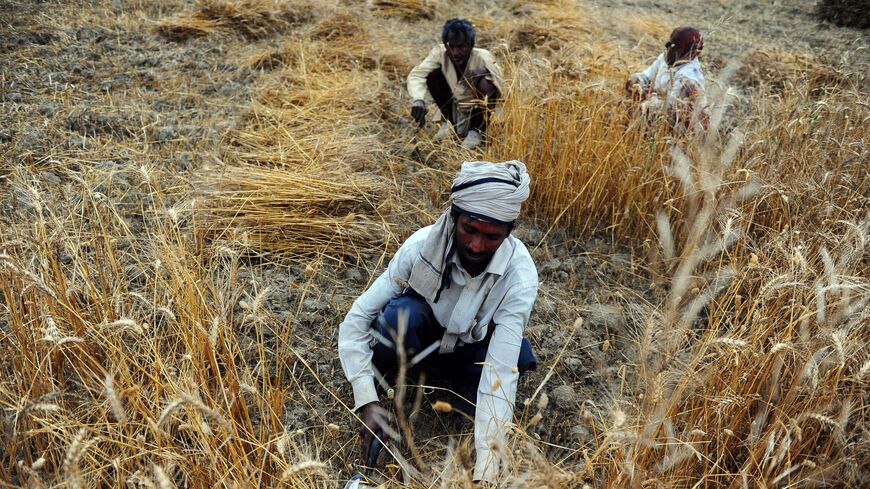 Indian farmers harvest wheat in Imamipur village on the outskirts of Allahabad on April 12, 2015. - Sanjay Kanojia/AFP via Getty Images

In a statement published March 21, India's Ministry of Commerce and Industry said that the Indian Agricultural and Processed Food Products Export Development Authority met with stakeholders in mid-March on how to increase shipments to several countries, including Egypt and Turkey. No details were provided on who took part in the meeting.

In a press conference on March 24, Egypt’s Minister of Supply and Internal Trade Ali al-Moselhi said that his country is in talks with several countries to import wheat, mainly India, Argentina, the United States and France. He indicated, however, that the country is in no rush to buy at the moment.

“There's no need for tenders right now, but we are planning for the entire year so we are open to all possibilities and preparing backup plans,” he added.

According to Reuters, Indian suppliers must still get accreditation as an import origin from the Egyptian state grain buyer known as the General Authority for Supply Commodities (GASC).

Alex Smith, a research analyst in the food and agriculture program at the Breakthrough Institute in California, told Al-Monitor that India aspires to increase its total wheat exports to about 7 million tons in 2022, its largest quantity ever.

According to data from the Indian Ministry of Agriculture and Farmers Welfare, wheat exports from India increased more than fourfold in the 10 months ending on Jan. 31, marking a rise from 1.38 million tons to 6 million tons. The ministry also expects a production increase in the current year to a record 111.3 million tons, compared to 109.6 million tons last year.

“India is not the only potential trading partner for Egypt in light of the disruption of Russian and Ukrainian imports due to the war," Smith said. Indian imports cannot match the 3.07 million tons of wheat Egypt imported from Ukraine in 2020, or the 8.25 million from Russia.

Egypt needs to search for other sources, Smith added, such as the US and Argentina, and will likely need to build trade partnerships with them, along with India, if the current crisis continues.

“India is an important alternative for Egypt to import wheat," Ali al-Idrissi, a professor of economics at the Culture and Science City in Cairo, told Al-Monitor by phone. “Egypt has good trade relations with India, and we previously worked with [India] to import rice. India is the best option to bring in wheat now for logistical considerations, including the low cost of shipping.”

Although India is the best source in the crisis, “We cannot deny that Russia and Ukraine are the best options for Egypt, especially in terms of [the shipment fees] and the good quality of wheat," added , Idrissi, who is also a member of the Egyptian Society for Political Economics, Statistics and Legislation. "But we are currently facing a [global] crisis and we need to have solutions based on our needs for the next year.”

According to a report published by the State Information Service on March 20, the Egyptian-Indian economic and trade relations have remarkably developed in the past years. India is Egypt's third largest trading partner, with Indian investments in Egypt amounting to about $3 billion, according to the report.

Egypt's strategic stock plus the local wheat supply will suffice until the end of the year, Idrissi said, but "things must be resolved right now, and the search for other sources of import must intensify.”

During his March 24 press conference, Moselhi said that the wheat stock in Egypt is enough for more than three and a half months, and the local wheat supply season would start in April. He added that Egypt seeks to import from 5.5 to 6 million tons to meet its needs until the end of 2022.

Egypt is also planning to call for tenders to buy wheat in the middle of the local harvest season, which usually begins in April and ends in August, Moselhi continued.

“Russia’s invasion of Ukraine poses a significant threat to global wheat supplies, and has led so far to higher [global grain] prices," Smith said. "Yet, this has not seemingly affected Egypt's food security so far, as Egypt’s grain stock, in addition to the local production, prevented wheat shortages.”

Also, he pointed out, the Egyptian government has fixed the price of bread in the market.