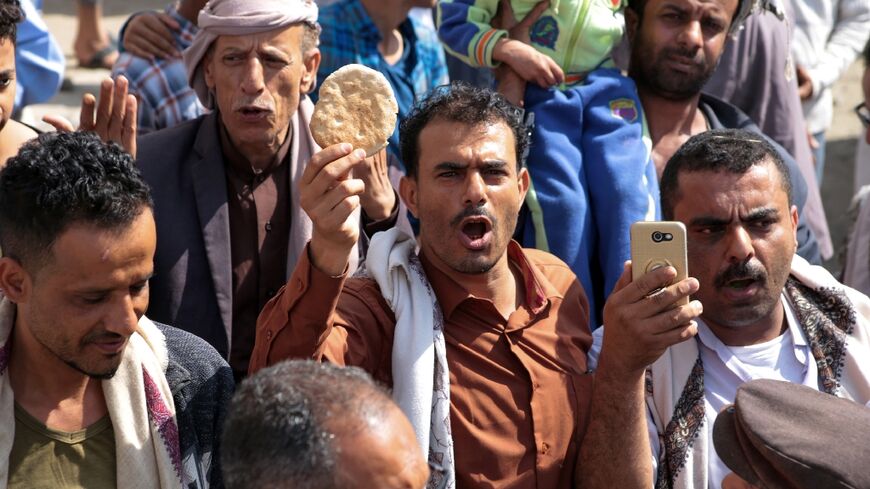 A Yemeni man holds up a piece of bread during a protest against the deteriorating economic conditions - AHMAD AL-BASHA
by Sarah Benhaida
February 26, 2022 — Cairo (AFP)

Russia's invasion of Ukraine could mean less bread on the table in Egypt, Lebanon, Yemen and elsewhere in the Arab world where millions already struggle to survive.

The region is heavily dependent on wheat supplies from the two countries which are now at war, and any shortages of the staple food have potential to bring unrest.

If those supplies are disrupted, "the Ukraine crisis could trigger renewed protests and instability" in several Middle East and North Africa countries, the Washington-based Middle East Institute said.

The generals now ruling in Khartoum after an October coup have not forgotten: In 2019 one of their own, Field Marshall Omar al-Bashir, Sudan's longtime autocrat, was toppled by his military under pressure from mass demonstrations triggered by a tripling of the bread price.

Sudan is already facing regular anti-coup protests but seems to have taken the initiative to avoid demonstrations over bread.

When Russia's invasion began on Thursday, the second-highest figure in Sudan's ruling Sovereign Council was in Moscow to discuss trade ties. 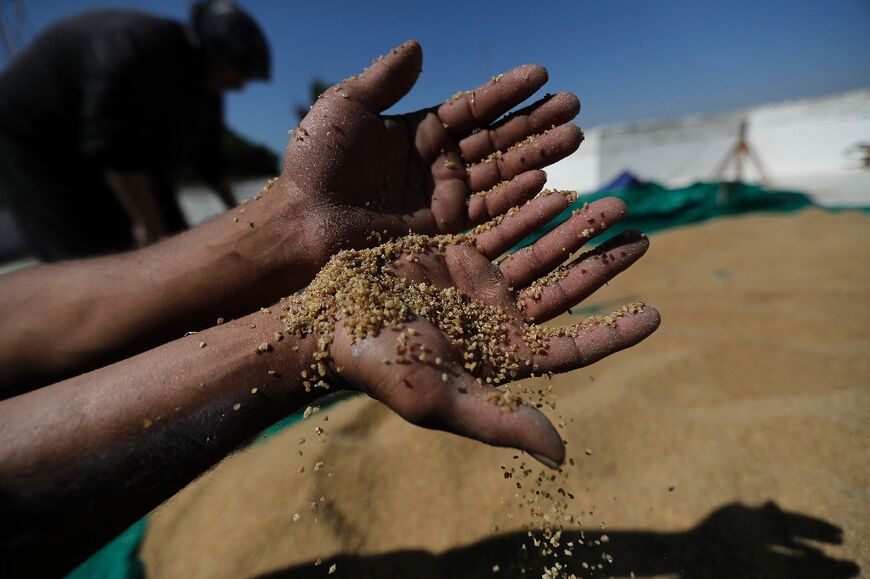 Bread is already a luxury for millions in Yemen, where a seven-year war has pushed the country to the brink of famine.

"Most people can barely afford the basic foods," and the war in Ukraine will only "make things worse", Walid Salah, 35, a civil servant in the rebel-held capital Sanaa, told AFP.

Russia is the world's top wheat exporter and Ukraine the fourth, according to estimates by the US Department of Agriculture.

Moscow's invasion pushed the wheat price far above its previous record high in European trading to 344 euros ($384) a tonne on Thursday.

David Beasley, the World Food Programme's executive director, said the Ukraine-Russia area provides half the agency's grains. The war, he said, "is going to have a dramatic impact".

Before its civil war began in 2011, Syria produced enough wheat to feed its population but harvests then plunged and led to increased reliance on imports.

The Damascus regime is a staunch ally of Moscow which backed it militarily during the war.

Damascus says it is now working to distribute the stocks to use them over two months. 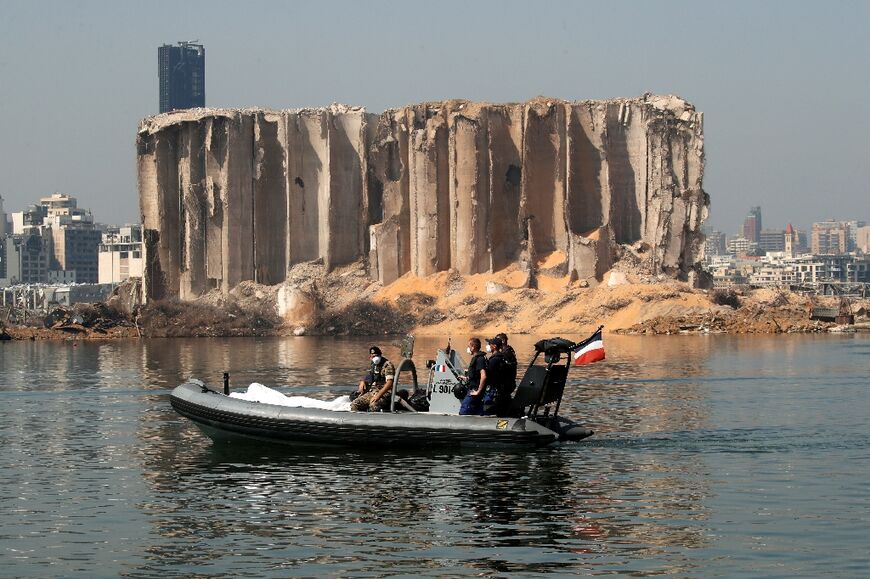 The country is gripped by a financial crisis which has left more than 80 percent of the population in poverty, and a 2020 port explosion damaged large parts of Beirut including silos containing 45,000 tonnes of grain.

Lebanon's current stock, in addition to five ships from Ukraine waiting to be offloaded, "can only last for one month and a half", said Ahmad Hoteit, the representative of Lebanon's wheat importers.

Ukraine was the source of 80 percent of the 600,000 to 650,000 tonnes of wheat imported annually by Lebanon, which has only been able to store about a month's worth of wheat since the port blast, he told AFP.

The United States can be an alternate supplier but shipments could take up to 25 days instead of seven, Hoteit said.

In the Maghreb, where wheat is the basis for couscous as well as bread, Morocco's minister in charge of budget, Fouzi Lekjaa, told journalists the government would increase subsidies on flour to $400 million this year and stop charging import duties on wheat.

Nearby Tunisia, with heavy debts and limited currency reserves, doesn't have that luxury. In December, local media reported that ships delivering wheat had refused to unload their cargo as they had not been paid.

Tunisia relies on Ukrainian and Russian imports for 60 percent of its total wheat consumption, according to agriculture ministry expert Abdelhalim Gasmi. He said current stocks are sufficient until June.

Neighbouring Algeria, which says it has a six-month supply, is Africa's second-largest wheat consumer and the world's fifth-largest cereals importer.

Egypt imports the most wheat in the world and is Russia's second-largest customer. It bought 3.5 million tonnes in mid-January, according to S&P Global. 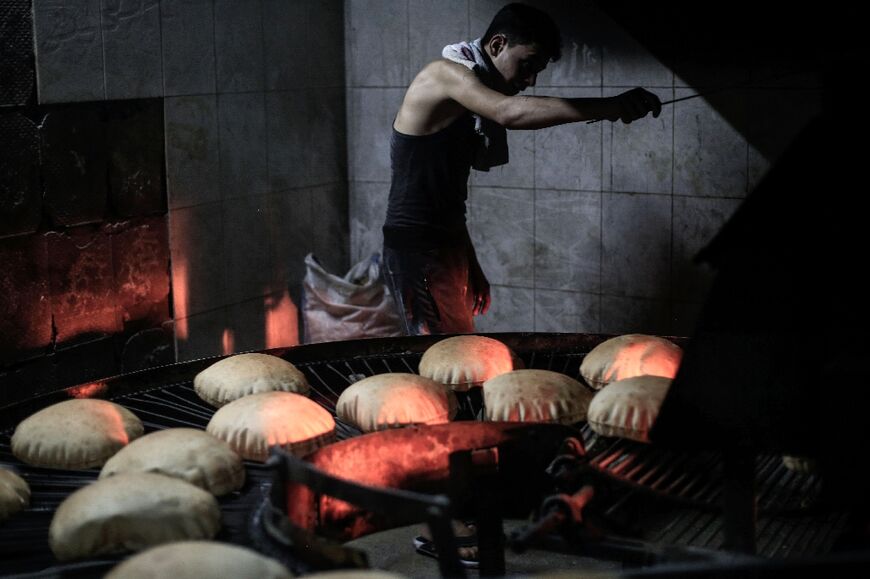 The Arab world's most populous country has started to buy elsewhere, particularly Romania, but 80 percent of its imports have come from Russia and Ukraine.

Egypt still has nine months of stock to feed its more than 100 million people, government spokesman Nader Saad said. But he added: "We will no longer be able to buy at the price before the crisis."

That is an ominous sign for the 70 percent of the population who receive five subsidised breads a day.

The weight of the subsidised round food was reduced in 2020 and now the government is considering raising the price -- fixed at five piastres (0.3 cents) for the past three decades -- to get closer to the production cost.

When then-president Anwar Sadat tried to drop the subsidy on bread in January 1977 "bread riots" erupted. They stopped when he cancelled the increase.