Amid the Russian-Ukrainian crisis, concerns are growing in Lebanon over a shortage of wheat supplies, as the country imports the bulk of its wheat needs from Ukraine. 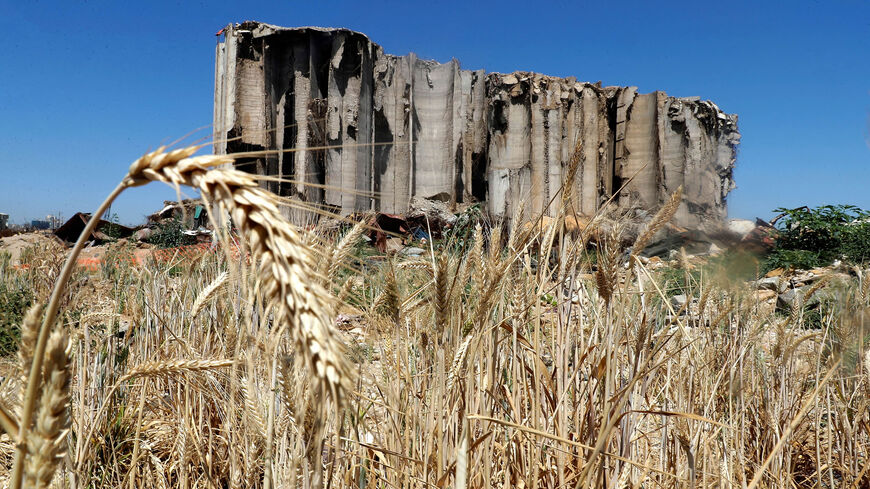 Wheat grains spilled from the silos at Beirut port in the massive explosion Aug. 4, 2020, are fully grown, Lebanon, May 27, 2021. - Joseph Eid/AFP via Getty Images

BEIRUT — Lebanon might be facing a wheat crisis with the onset of the war in Ukraine, as it imports the bulk of its wheat supplies from the eastern European country. Amid the crippling Lebanese economic crisis, people fear the state will be unable to provide the market’s need for wheat to produce bread.

“We are trying to manage a crisis right now, and we have no plans. We only have stocks for about a month and a half,” Geryes Berbari, the Economy Ministry's general director of the grains and sugar beets department, told Al-Monitor. “We are currently looking for an alternative to Ukrainian wheat.”

Berbari noted, “There are several options, including importing wheat from Russia, Kazakhstan and other countries. The good thing is that wheat importers are still able to import, and we will intervene and communicate with countries to secure wheat in order to protect food security.”

The Ministry of Economy has recently formed the Food Security Committee, which is an emergency committee made up of representatives of the concerned authorities, such as mills and bakeries, to discuss alternatives for wheat supplies.

Ahmed Hoteit, head of the Syndicate of Wheat Importers in Lebanon, told Al-Monitor, “The committee will take the best decision in order to secure wheat from alternative markets in the coming days.”

He added, “The government has agreed to provide an advance to buy 50,000 tons of wheat, which is enough for about a month. The Ministry of Economy has started drawing up conditions for tenders, but there are concerns about offers being too pricey, such as the ones Egypt received.”

Prior to the Ukraine-Russia crisis, Lebanon’s Central Bank had delayed opening the necessary credits for wheat purchase.

Hoteit said it wasn’t until Feb. 25 that “the Central Bank transferred the credits of two ships of wheat and promised to transfer the credits of four ships on Feb. 28 and March 1. The wheat that is coming will secure sufficient stock for a month and a half.”

Lebanon imports about 50,000 tons of wheat per month to cover the market's need for bread and its derivatives, amounting to about 600,000 tons annually.

Lebanon used to store wheat for local consumption for about four months, but the August 2020 Beirut port explosion destroyed the grain silos at the port, so Lebanon now stores its monthly need of wheat in the warehouses of 12 mills.

The government is considering a project to demolish the remainder of the port silos and rebuild them as part of a plan for the reconstruction of the port in cooperation with the World Bank.

Meanwhile, the Lebanese are suffering under a stifling living crisis, as the local currency has significantly depreciated. As a result, the majority of goods have become too expensive and certain goods have completely disappeared from the market.

The wheat crisis will worsen the situation, amid fears of a rise in the price of bread, which has already increased several times in recent months. The demand for bread has increased significantly, as it has become the main food of the most vulnerable.

Ali Ibrahim, head of the Bakery Owners Syndicate, told Al-Monitor that the failure to address the issue as quickly as possible will inevitably affect the citizens, as the rise in the global price of wheat will affect local prices.

There are concerns about the Central Bank no longer subsidizing wheat in the event of an increase in wheat prices globally, which may raise the local price of bread even more.

Berbari noted that the rise in the price of wheat globally will certainly reflect on the price of bread in Lebanon, which the Economy Ministry sets weekly. But the greater fear is of the rise in all the ingredients that go into the production of bread, including diesel and nylon, which would make the price rise more tangible, he added.

Hoteit said, “The price of wheat increased by 40 euros [$44.55] per ton on the day the [Russian] military operation began in Ukraine, and no one knows what the price of a ton of wheat will be in the coming days.”

He noted that Lebanon could be getting fast shipments from Romania, Serbia and Hungary. Importing from the United States would be expensive and take longer — about 25 days for a shipment, compared to the seven days it takes from Ukraine.

Lebanese Economy Minister Amin Salam told Reuters Feb. 25 that Lebanon is in talks with other countries to import wheat, including the United States, India, France and some other European countries.

During a Feb. 25 press conference, Salam said, “It is important that we can take commitments from some countries and companies at low prices. We buy and reserve wheat, so we can secure stock for one or two more months.”

Nada Nehme, vice president of Consumers Lebanon, a local association protecting consumers, told Al-Monitor, “Wheat is subsidized but other materials are not — such as diesel — and the price of bread may thus rise.”

She said, “Why do we always need to depend on imports? Why don't we grow wheat in Lebanon, and why did we not plant soft wheat used for bread when the economic crisis first started?”

Nehme pointed out, “We always wait for crises to hit before we start looking for solutions, and Lebanon’s crises are ever-increasing. We are living without electricity and without the minimum necessities of life.”

Berbari noted, “Lebanon produces 50,000 tons of wheat, 90% of which is of the hard type and is not suitable for making Arabic bread. It is grown in the Bekaa Valley, Akkar and the south, and is usually used in manufacturing pasta and bulgur.”

The Lebanese people fear the war in Ukraine could escalate, and countries would stop exporting wheat.

Patrick Mardini, economist and head of the Lebanese Institute for Market Studies, told Al-Monitor, “The increase in demand for alternative sources of wheat will inevitably result in a price increase, not to mention the increase in the cost of transporting it as well.”

He believes the government must consider a rise in the price of bread, because the Central Bank subsidies used to buy wheat are depleting the foreign currency reserves. “If subsidies continue, wheat could disappear from the markets — similar to what happened with fuel,” he warned.