Egypt recently bought 240,000 tons of wheat from Russia directly, as the government continues to work on plans to avert a food crisis and preserve local supplies. 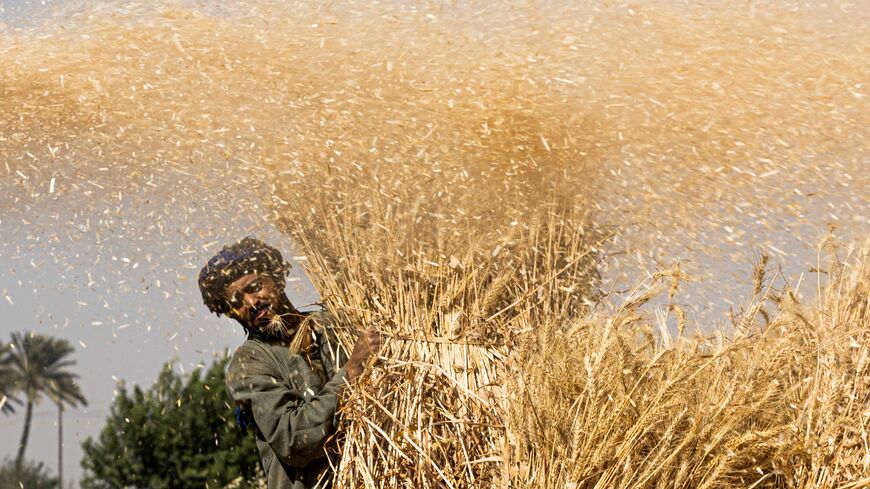 An Egyptian farmer takes part in wheat harvest in Bamha village near al-Ayyat town in Giza province, on May 17, 2022. - KHALED DESOUKI/AFP via Getty Images

CAIRO — Egypt’s Ministry of Supply announced Aug. 23 that the state grain buyer known as the General Authority for Supply Commodities signed a contract to purchase 240,000 tons of Russian wheat.

The Russian wheat cargos are scheduled to arrive between Sept. 20 and Nov. 10 to increase the country’s strategic stocks of imported wheat.

While Egypt has not officially announced the purchase price, Reuters on Aug. 23 quoted traders who believed it was $368 per ton.

In an Aug. 9 press statement, Egypt’s Minister of Supply and Internal Trade Ali al-Moselhi revealed that the country has imported about 1.8 million tons of wheat since the outbreak of the Ukrainian war in February.

A source at the Egyptian Ministry of Supply told Al-Monitor that the new Russian wheat shipment is very important, given that Russia was the largest exporter of wheat to Egypt over the past years

He added that the Egyptian government has succeeded in managing the wheat import crisis in the past six months by diversifying its import sources. The government has signed contracts for wheat from several countries, including France, Romania, Bulgaria and India, in the hope that the global situation would calm down. The source further stressed that the country’s strategic wheat reserve is sufficient for the next seven months.

Imports account for nearly 62% of the country’s total wheat consumption, and about 60% of the import figure comes from Russia, according to a document sent by the Egyptian government to the World Bank in May, requesting $500 million for imported wheat. The World Bank approved this request in late June.

Ali al-Idrissi, professor of economics at the Culture and Science City in Cairo and member of the Egyptian Society for Political Economy Statistics and Legislation, told Al-Monitor that Russian imports are "an important part of the Egyptian efforts to preserve food security.” He explained that the wheat purchase contracts would secure the country’s needs for 2023, as the existing stock is sufficient for seven months.

Idrissi indicated that the Russian wheat contract is linked to the good diplomatic and political relations between Cairo and Moscow, which was reflected positively on the economic and trade relations between the two countries.

Rashad Abdo, head of the Egyptian Forum for Economic and Strategic Studies, told Al-Monitor, “Egypt maintained its political and economic relations with Russia during the conflict with Ukraine and the West. This has helped protect its interests and the joint projects between the two sides, whether the import of wheat or the implementation of the Dabaa nuclear plant project.”

In its Aug. 23 report, Reuters quoted two sources as saying that further direct purchases were possible.

In late July, Mosehli said that the Egyptian government has bought 4 million tons of local wheat from farmers, at a cost of 23 billion Egyptian pounds ($1.2 billion).

The US Department of Agriculture revealed in late June that Egypt’s wheat imports reached 3.32 million tons in the first five months of this year, down from 4.35 million tons during the same period of 2021 due to the Russian war on Ukraine and subsequent unprecedented rise in global prices. The Russian-Ukrainian agreement reached in July for the export of Ukrainian grain could ease the food crisis, Idrissi explained.

Domestically, Idrissi said, the Egyptian government is establishing modern wheat silos in all governorates, and it is seeking to increase local wheat production,by granting incentives to farmers such as providing fertilizers.

Reda Mohamed Ali, head of the National Wheat Campaign at the Ministry of Agriculture and Land Reclamation, told Al-Shorouk daily on May 22 that Egypt aims to increase the areas planted with wheat from 3.6 million feddans to 5 million feddans during the next three years.

“It is important for Egypt to secure its wheat needs for the next year, because we do not know what the future holds," Abdo said. "A new crisis may be triggered in the future and the Russian and Ukrainian shipments could be halted again. Wheat is part of the citizens’ national security.”