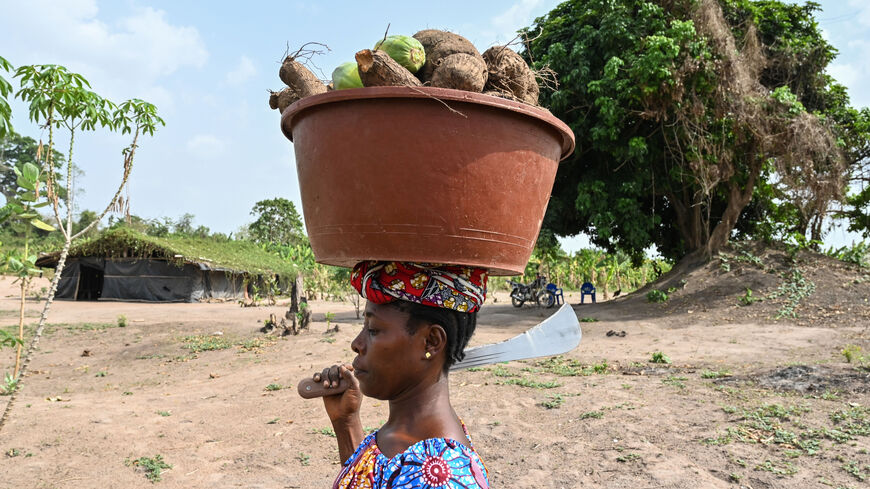 A woman carries a bowl of yams upon her return from the fields in the village of Kokoti-Kouamekro, Ivory Coast, on Feb. 25, 2020. - ISSOUF SANOGO/AFP via Getty Images

With a population of 103 million and an exorbitant wheat import bill, the unprecedented move is an attempt to mitigate effects of the ongoing war in Ukraine. The war has pushed wheat prices up in the international market, which threatens to widen the budget deficit and drain Cairo's coffers.

However, officials at the Ministry of Supply which oversees the production of close to 200 million loaves of bread for over 80 million people in the national food rationing system every day, found a potential rescue in the drawers of the state-run Agricultural Research Center, where research about a sweet potato variety in bread has been gathering dust for over two decades.

The researcher says he has been trying to convince the government of the findings of his studies since 1993. "However, wheat was easy to obtain from the international market all those years," Abdelmonem al-Gendi told Al-Monitor. Now, with the war in Ukraine threatening Egypt's food security, the government is listening.

Al-Gendi has experimented with all potato varieties for over two decades now.

Some of the nation's bakeries have already started producing the bread from a mix of sweet potatoes and wheat flour, and al-Gendi says Egypt can stop importing wheat altogether in a matter of three years, if decision-makers in Cairo follow his plan. "We can do this by substituting wheat imports with locally produced sweet potatoes," al-Gendi said.

This is huge news in Egypt, the world's largest importer of wheat. This bread-addicted country consumes 22 million tons of wheat every year, but it produces only about half that much.

Wheat imports cost billions of dollars every year and this budget has risen by almost $1.1 billion because of the Ukraine war.

To reduce dependence on imports, Egyptian authorities forced wheat farmers earlier this year to hand over a percentage of their output for the new harvest season, which started in early April, to government-run silos.

Egypt is also hunting for suppliers other than Ukraine and Russia, from which almost 80% of last year's imports came. Egypt needs around 10 million tons of wheat to produce bread for those registered in the national food rationing system.

There are wheat reserves enough until the end of this year, but this means that Egypt will start feeling the actual supply pinch from the Ukraine war as of next year — especially with major wheat producers focusing on satisfying the needs of their peoples before making any export deals.

This is why Egyptian government officials are taking the sweet potato idea seriously. The Ministry of Supply hopes mixing sweet potatoes into bread will reduce wheat imports by a million tons a year, almost 10% of annual imports. Informed sources say this is possible, especially if local consumers like the taste of the new bread.

The government's other coping strategy was to increase the amount of flour extracted from wheat to 87.5%, from 82% now.

An acre of farmland can produce about 10 times as much sweet potatoes as wheat, according to al-Gendi, the Agricultural Research Center researcher. This is why he is confident that the gap between local wheat production and bread making needs can be easily bridged.

"However, we need to expand the cultivation of sweet potatoes," al-Gendi said. The country needs a million acres for it, he said, but  the space cultivated with sweet potatoes in Egypt now does not exceed 31,000 acres, according to Head of the Farmers Union Hussein Abu Saddam.

To be used in bread, sweet potatoes have to be dried and then ground to a powder. This powder is then added to the wheat flour before mixing.

Ministry of Agriculture officials did not return calls by Al-Monitor to comment on whether they have prepared plans to expand the cultivation of potatoes in the future.

Abu Saddam said farmers used to be unwilling to grow sweet potatoes due to lack of demand, but "success in the production of bread from sweet potatoes will surely change all this."

Water has always been an impediment on Egypt's road to achieving self-sufficiency in wheat production. Water-poor Egypt can hardly satisfy the needs of its people and its agriculture with the 55.5 billion cubic meters of water it receives from the Nile every year.

Economists say, meanwhile, that the reduction of wheat imports would reflect positively on economic conditions in Egypt, in general.

The Egyptian government has already applied for a loan from the World Bank to finance its purchase of wheat for the coming period.

"Egypt has to fend for itself in producing its own food," Khaled al-Shafei, head of the think tank Capital Center for Economic Studies and Research, told Al-Monitor. "We are taking good moves on the road to reducing imports and this will save the economy, especially with the war in Ukraine not showing any signs of abating."