Al-Rai's local council in Aleppo’s countryside announced its decision to buy crops from local farmers to help them market their products. 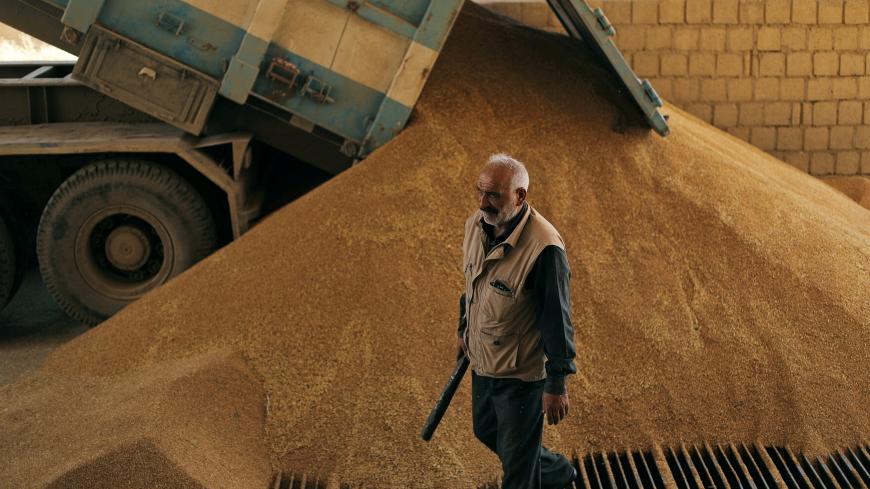 A driver unloads wheat grain from a truck at a mill, Qamishli, Syria, June 3, 2019. - REUTERS/Rodi Said

ALEPPO — In a statement released June 13, the local council in the town of al-Rai — which is in the Operation Euphrates Shield area in Aleppo’s countryside — announced the Turkish government’s readiness to buy grain from farmers. The Turkish office for agricultural crops, affiliated with the Turkish Ministry of Agriculture, will be buying the grain from the farmers in Aleppo through the local council’s agricultural office, its director Mohammad Fawzi Rashid explained to Al-Monitor.

The local council’s agricultural office will receive the grain and store it in silos in al-Rai. There are no current plans to move the grain inside Turkish territory, according to council officials.

The valleys of Aleppo's northern and northeastern countrysides are known for the cultivation of various types of grain. Wheat and barley are the most common because of the suitable climate and appropriate soil for cultivation. Other less-common crops, like lentils, chickpeas, fava beans and corn, are also grown in the area.

After the Turkish government announced its decision to purchase the grain through the local office in al-Rai, prices increased.

The decision aims to help farmers sell their products since other markets are not available — including unavailable markets in regime-held areas or in areas outside the control of the Turkish-backed Free Syrian Army (FSA).

Al-Monitor visited al-Rai June 20 where the silos are located on the eastern side of town. In front of the gate of the grain silos' collection center, several trucks loaded with wheat and barley bags were parked. Drivers were waiting for their turn to enter and unload.

Fawzi Rashid told Al-Monitor, “We began receiving crops June 19, which means a week after the council’s announcement. On the first day, we received 30 tons of barley and wheat. Farmers are excited to sell their crops because prices are convenient for them. The farmers get paid for the crops 15 days after delivering to the silos of al-Rai.”

He said, “We specified several conditions that farmers must fulfill to market their crops. The farmer should have a certificate of origin certified by the local council of the city where he lives, documented amount of grain he wants to sell and his identity card issued by the local council.”

Farmers in the area faced many losses before the Turkish decision in light of the low prices that did not cover production costs. Syrian farmers were also unable to sell their crops in areas under regime or Syrian Democratic Forces (SDF) control because of taxes imposed by the regime on the crossings.

Abdul Raouf Hussein, a farmer from the Aleppo countryside, told Al-Monitor, “Prices rose when al-Rai civil council announced it would purchase the grain. Each ton of barley cost 80,000 Syrian pounds ($130), and after the civil council announced its intention to purchase, the price rose to 105,000 Syrian pounds ($175) per ton. This price is good and covers agriculture costs while keeping a margin of profit.”

In 2018, the Turkish government began purchasing different types of crops that are common in the cities and towns of the Aleppo countryside to help farmers in the areas under the control of the FSA to market their crops and satisfy some of the needs of the Turkish market. This, in turn, contributed to decreasing prices in local Turkish markets. Potatoes were among the first crops that Turkey began importing from the Aleppo countryside in July 2018. The Turkish government imported 4,000 tons of potatoes at first, and then bought pistachio crops, which Turkey started selling Nov. 20, 2018.

With the announcement of purchasing grain and delivering it to silos in al-Rai, agricultural offices affiliated with the local councils in the Aleppo countryside in Marea, al-Bab, Azaz, Akhtarin, Jarablus and Suran helped farmers to market their crops by granting them the documents they need to deliver to al-Rai.

Mahmoud Najjar, director of the agricultural office of the Marea local council, told Al-Monitor, “The agricultural office in Marea grants farmers who want to market their crops in al-Rai silos certificates of origin. Turkey’s purchase of grain positively impacted the market movement and boosted prices of some agricultural crops. Farmers were spared the nightmare of loss, as there is no way to sell grain in other Syrian cities.”