How corrupt is Egypt's wheat industry?

In an interview with Al-Monitor, Egypt's Minister of Supply Khaled Hanafy rebutted all accusations of importing substandard wheat and explained the government's plan to fight rising grain prices. 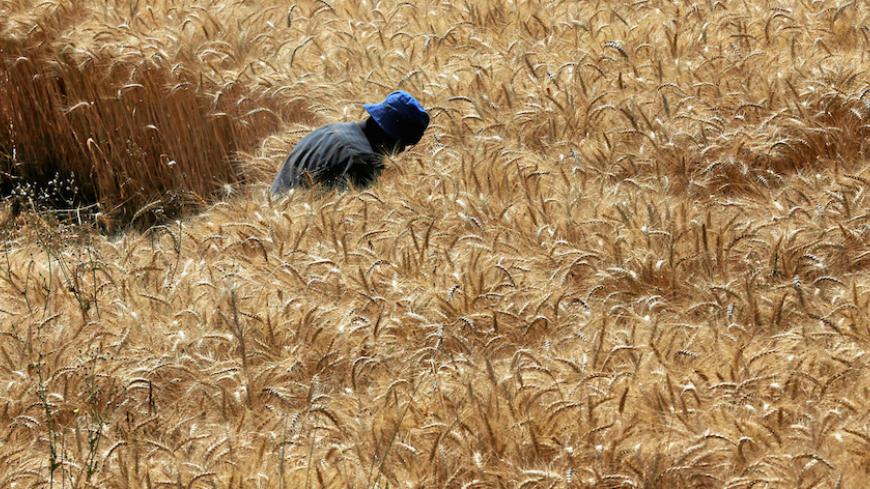 A farmer harvests wheat on Qalyub farm in the El-Kalubia governorate, northeast of Cairo, May 1, 2016. - REUTERS/Amr Abdallah Dalsh

CAIRO — In an exclusive interview with Al-Monitor, Egypt’s Minister of Supply and Internal Trade Khaled Hanafy denied accusations leveled at him by a fact-finding committee formed by parliament to investigate systematic corruption in supplying wheat to the government. He said that he objected to the corrupt system and demanded that changes be made to it, but that parliament members insisted it remain unchanged before changing their minds to criticize it now.

The wheat crisis in Egypt intensified at the beginning of July, as a number of members of parliament demanded that Hanafy be dismissed for accusations related to corruption in grain supplied by farmers to the government. According to some claims, the corruption amounted to billions of Egyptian pounds.

The minister rebutted all accusations leveled at the Egyptian government of importing certain grains that do not meet quality standards and cause illnesses to Egyptians. Hanafy also explained the government’s plan to fight a price surge that is angering many citizens.

Al-Monitor:  Anger is dominating the news in Egypt as the parliament’s fact-finding committee on wheat corruption has found that embezzlement from the silos reached 42% of the national grain reserves this year. To what extent is the ministry responsible?

Hanafy:  The Ministry of Supply and Internal Trade [MSIT] is one of four ministries supplying the grain. The other three help us through creating committees for the process of receiving. Their number this year reached 517 committees, each of them includes one [member] from the MSIT. According to the reports, these committees said that we had received 4.9 million tons of wheat. I would like to state that the news circulating that the parliament’s fact-finding committee found that the deficit is at 42% is not true. All the reports, which were carried out by the fact-finding committee, indicated that the number is only 4% of the supplied wheat, which weighs about 230,000 tons [that are] worth 2,800 Egyptian pounds [$315] per ton, making a total deficit of 644 million Egyptian pounds [$72.5 million].

I took office in 2014. In the same year, I presented a memorandum to the Cabinet to change the system in which the current local wheat supply is processed, as it is based on subsidizing grain for farmers at a price exceeding the global average, causing many disadvantages such as the smuggling of imported grain and treating it as local grain. Therefore, we suggested that we buy grain at its price while subsidizing the farmer with 1,300 Egyptian pounds [$146] per  feddan [roughly an acre] as financial support. However, the current [members of parliament] objected and requested that the current system continue. Therefore, I put regulations to resist tampering such as prohibiting imported grain while the local grain is still being supplied, sanctioning whoever does this and making the supply based on possession.

Al-Monitor:  Yet isn’t a deficit of 644 million Egyptian pounds a large amount, representing a right that the people and state have been deprived of?

Hanafy:  The ministry currently prevents the loss of the rights of the state and the people. Hundreds of reports are filed to us every day. The suppliers’ payments range between 1.5 billion and 2 billion Egyptian pounds. In case the judiciary proves any deficit, the contracts state that in case of liquidation, the supplier is obliged criminally and financially to pay the deficit value and is obliged to pay a fine that the MSIT determines. There is also a fidelity insurance of 5 billion Egyptian pounds, which means that the rights of the people and the state are guaranteed.

Al-Monitor:  Is there a dispute between the government, represented by the MSIT, and the parliament’s fact-finding committee regarding wheat corruption?

Hanafy:  The work of the government and that of the parliament are complementary. The difference is in the mechanism and the regulations, as [the parliament] relied on a method to estimate weight — as opposed to actually weighing it — and depended on the RGS company to implement this method. However, the general prosecutor rejected this method and demanded the liquidation [of RGS], so that the actual size of the deficit in Egypt’s grain silos could be determined.

Al-Monitor:  How do you comment on the accusations leveled by Bloomberg at MSIT officials that the officials intentionally failed to provide electricity to the 93 silos that Bloomberg equipped with surveillance systems worth 193 million Egyptian pounds [$22 million] to prevent thefts?

Hanafy:  Bloomberg is only a supplier of granary updating systems. Their work is done, and they received their payment. After that, they offered Egypt to update the remaining granaries. They presented a financial and technical proposal to the [Holding] General Company for Silos and Storage (GCSS). Nothing compels the GCSS to take offers from the same supplier. I do not underestimate Bloomberg. However, I still have the right to refuse the offer for financial or technical reasons and keep the reasons to myself, which is the global convention. As a response, the company launched a smear campaign against Egypt and accused Egyptian farmers of cheating and soaking grains in water to increase their weight. This is quite funny as grains rot when they are sprayed with water during storage. They cannot talk about whether electricity was provided as they are only responsible for supplying internal systems, and the contract states that each silo has a generator attached to it.

Al-Monitor:  You have succeeded after a few months in office of eliminating queues in front of [state-subsidized] bakeries, where people had to wait to receive bread. Are you satisfied with the current system and is it now free of corruption?

Hanafy:  The bread crisis started in the 1970s and Egyptians have long thought that after 50 years nothing could be done. We decided to start fighting all this and stirred up a hornet’s nest when we put a new system to distribute bread that is based on buying it at market price with smart cards. Bread has become accessible to everyone. Not only did we provide bread, but we also rationed the cost of bread and saved 6 million Egyptian pounds [$676,000] that the citizen receives again through food commodities.

Al-Monitor:  How about the wheat import issue, where the MSIT is accused of making deals on grains that do not meet proper standards and that have a proportion of carcinogenic parasites.

Hanafy:  We cannot receive wheat [that the rest of the world considers unfit for human consumption]. We buy wheat from international stock markets without any local intermediaries as we used to. We saved $104 million for the first time and even bought at prices lower than those announced in international stock markets. The wheat imported by the General Authority for Supply Commodities is bought according to the “Egyptian Code” system.

By no means can we import anything that does not meet Egyptian standards, which are compatible with international standards. After buying, committees from the ministries of health, agriculture and industry examine the shipments. Some corruption would come at the hands of local intermediaries, but now we head directly to the global market. Currently, Egypt is suffering from those who benefited from tampering with prices.

Al-Monitor:  The crisis of lack of commodities supplied by the government has worsened. In light of a crazy price surge, how will the MSIT respond?

Hanafy:  We are working on pushing more commodities in large amounts to markets and supply outlets to fight the probable surge in any of the similar commodities. We also pushed more vehicles loaded with food commodities to sell food in public squares at prices 20-25% lower than their counterparts. This would also save cash in foreign exchange, which we need to buy goods from abroad.