Complicated bureaucracy and shifting subsidizing policies are pushing many Egyptian farmers to give up cultivation of one of the country's most important crops. 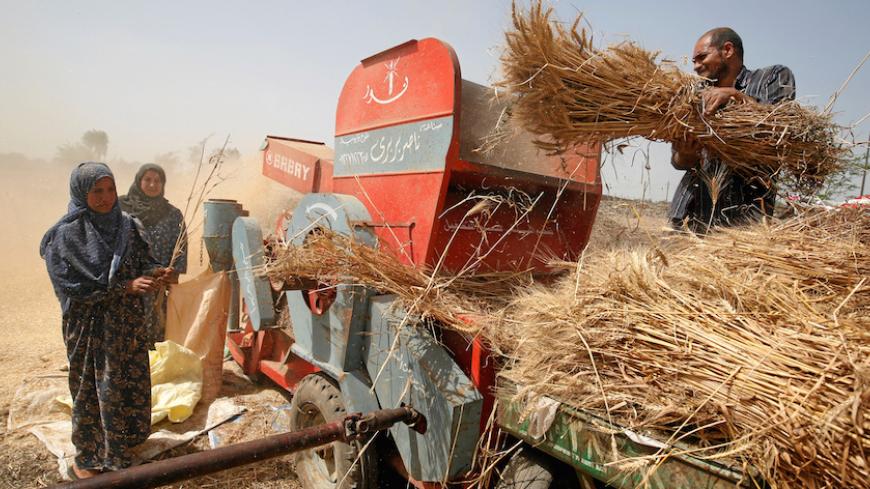 Egyptian farmers use a threshing machine as they harvest their wheat crop in Qaha, El-Kalubia governorate, northeast of Cairo, May 5, 2016 - REUTERS/Amr Abdallah Dalsh

In November, the Egyptian government announced that it would start buying wheat from local farmers at the average global price to encourage Egyptian farmers to grow the crop. Egypt is seeking to reduce the gap between domestic production and actual consumption, seeing that the country consumes about 18 million tons of wheat annually but has a domestic production of less than 9 million tons.

This year's wheat harvest season, which started in mid-April and ends in mid-July, has been hit by several crises that have burdened Egyptian farmers. Egypt’s governorates have been battling a wheat supply crisis in storage houses and cooperative associations affiliated with the Ministry of Agriculture.

Ramadan Jaafar, a farmer and owner of agricultural land in Beheira governorate, one of the most prominent wheat-producing regions in the country, decided to grow wheat after the government announced in November that it would pay 1,300 Egyptian pounds ($146) in subsidies for each planted acre. But Jaafar was unpleasantly surprised when the government renounced its earlier decision and decided in April to instead buy wheat at a price of 420 Egyptian pounds per ardeb (equal to roughly 150 kilos), with a slight increase over the global price.

Jaafar said that he decided to proceed with his wheat cultivation plan, even though the government had slashed the subsidy aimed at boosting the Egyptian economy and paving the way for cutting imports and reaching self-sufficiency with the domestic crop.

He told Al-Monitor that after completing the harvest of his fields this year he transported the crop at his own expense to the shouna (a traditional open-air storage barn affiliated with the government) 50 kilometers (31 miles) from his home town.

Jaafar said he found a line of trucks stretching for 2 kilometers from the shouna due to the high supply level and bureaucratic procedures, which led him to stay all night in front of the facility, guarding the crop that he intended to sell in the morning. The next day, he had to wait for hours and in the end was unable to sell his crop because his name was not on the government’s list. The government maintains a list of farmers registered to sell their crops to the government storehouses. He ended up returning to his hometown, after having paid 700 Egyptian pounds to the truck driver who had transported his crop and stayed with him all night in front of the storage facility.

He said that he then resorted to a trader who he described as mediator between him and the shouna. According to him, the trader would handle the supply formality since he has good connections, unlike farmers. In return for this service, Jaafar sold the trader his wheat at a reduced price of 400 Egyptian pounds per ardeb, including 10 additional kilos for each ardeb.

Jaafar said that he had to accept the trader’s demands because he could not afford to sit on his crop without being able to sell it.

He said that he suffered a big loss this season because of his decision to grow wheat, having trusted a government that he said let him down during the buying-and-selling process.

When Al-Monitor asked Jaafar whether he will cultivate wheat again, he said that he will only produce enough for his own household consumption. He criticized Egyptian agricultural policy officials for turning their backs on farmers, indicating that he would prefer to grow any crop other than wheat that will yield him a profit.

Jaafar further indicated that his situation is not unique in his town, and also applies to many farmers across the country.

Al-Monitor asked Jaafar whether he filed any complaint to any official about his predicament, and he said that he did not do so because he does not think that anyone would listen to him.

For his part, Farid Wassel, the head of the Farmers and Agricultural Producers Syndicate, told Al-Monitor that the wheat supply crisis stems from what he sees as a conflict between state sectors and the failure to agree on a unified policy.

He described Egypt’s agricultural policy as policy based on an individual, which means that it changes when the minister of agriculture is changed. He called on the state to draw up a unified and comprehensive policy based on a clear plan that clarifies to the farmer the required production quantity, the methods of supply and the sale and purchase process. Wassel said that the lack of an agricultural policy will push farmers to stop wheat cultivation.

Nader Noureddin, a professor in the faculty of agriculture at Cairo University, believes that the Ministry of Supply should absorb the repercussions of the supply crunch.

He told Al-Monitor that Egyptian Minister of Supply Khaled Hanafi stands as an obstacle between farmers and the state since he has imposed complex procedures to the process, such as requiring farmers to sell their supply to specific government storehouses that are often far from their farms.

This followed the corruption scandal in 2015 where the government supposedly bought 5.3 million tons of domestic wheat, but it turned out that about 2 million tons of that were imported and sold at the subsidized price; this entailed a loss estimated at about 2 billion Egyptian pounds.

Noureddin said the current minister of supply is siding with importers and traders and prefers to rely on purchase of wheat from global markets.

Wael Abbas, the assistant to the minister of supply, told Al-Monitor that the packed line of trucks in front of the shounas is a natural phenomenon and that some farmers, out of laziness, prefer to head to nearby dirt storage shounas rather than transporting the crop to more modern ones.

He said that the Ministry of Supply supports farmers, pointing out that it is buying the ardeb at a price higher than the global price.

Abbas expects the government to buy about 5 million tons of wheat in the current season.

The Ministry of Agriculture said in a statement that as of May 25, 4,000,076 tons of domestic wheat had been bought by the government.

It should be noted that Egypt is the world’s largest wheat importer and that wheat is considered a strategic commodity that controls stability in the country. When the Egyptian people revolted on January 25, 2011, they chanted demands for “bread, freedom and social justice.”