Egyptian farmers are threatening to halt cultivation of certain crops to call attention to the need for state action to support and protect the industry. 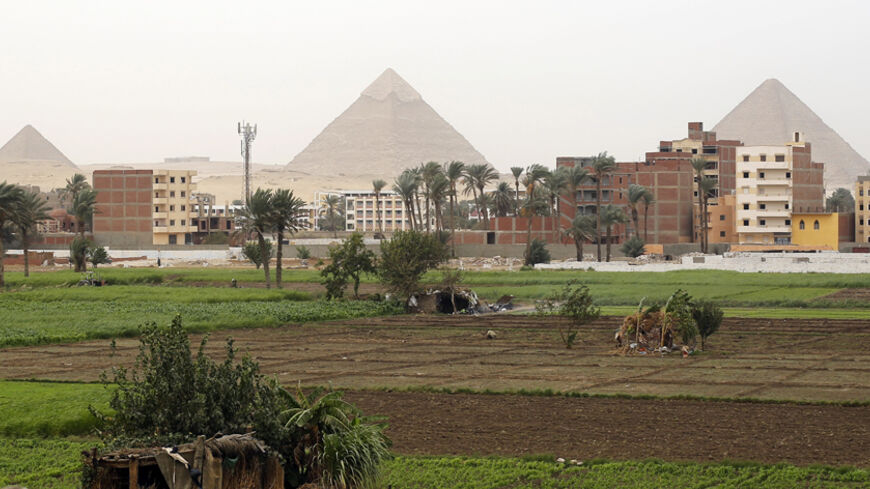 Farmers work at a rice field near the Great Giza pyramids on the outskirts of Cairo, Nov. 2, 2014. - REUTERS/Amr Abdallah Dalsh

CAIRO — Despite President Abdel Fattah al-Sisi’s directives to support Egyptian farmers and help them cope with the difficulties they face, farmers have been taken aback by higher prices in energy, fertilizers and pesticides. In addition, the lack of water for irrigation in some provinces has caused prices of agricultural products to rise.

However, the farmers’ hardships do not end with production, but also extend to the market, where staple crops such as rice, cotton and wheat have suffered heavy losses. Many farmers groups — such as the Farmers and Agricultural Producers Syndicate, the Farmers Syndicate, the General Assembly for Agrarian Reform and the General Assembly for New Land Reclamation — have vowed to take action against the government of Prime Minister Ibrahim Mahlab, accusing it of working against the farmers’ interests, which violates the constitution.

Farid Wassel, head of the Farmers and Agricultural Producers Syndicate, told Al-Monitor, “Following the rise in prices of fertilizers, we held a press conference at the Press Syndicate to announce our escalatory steps against the government. However, following the painful incident in Sinai, where 30 Egyptian soldiers were killed and 20 others were injured — most of whom belong to families of farmers — we canceled it to mourn their souls.”

Wassel added that farmers are facing a great many challenges. “Although food is a national security issue, we do not wish to escalate the situation to the extent of stopping farming and starving people. However, we are bearing many burdens, starting with the high prices of energy and fertilizers, not to mention the taxes we have to pay. This would push farmers to stop working involuntarily, as they do not have the means to face all these hardships and cannot market their products at good prices,” he said.

Wassel also said that farmers suffered great losses in their cotton and rice crops, as the state and the public and private textile factories prefer imported cotton, which is 50% cheaper — although Egyptian cotton is the finest.

“As for the rice crops, the state opened the door for rice exportation. But despite this, we continue to endure heavy losses. The Minister of Agriculture suggested to the president to buy rice from farmers [directly] — after traders used to control the industry — for 2,050 Egyptian pounds [$286]. Nevertheless, the president, who agreed to the decision, was misled by the [agriculture] minister, who took action in favor of traders, not farmers,” Wassel said.

Wassel added, “We as farmers demand that the president set forth agricultural policies and provide the agricultural system, which is still rudimentary, with the means to conduct modern scientific research. Abroad, one farmer can plow 100 acres alone using agricultural machines, while we continue to use primitive axes and tools, which makes agriculture a difficult and expensive process.

“We cannot compete at the international level, which causes Egypt to export the majority of its food,” he went on. “We demand that an agricultural plan be set forth for the next 20 years, including a plan to meet our need of [national] products, a marketing plan. Steps should also be adopted to increase the value added to agricultural products through manufacturing, cancel debt interest for farmers and implement the health insurance law, which was issued more than two months ago but has yet to be executed."

Wassel believes that the quickest solution to alleviate the current hardships faced by farmers is through energy subsidy vouchers, similar to those granted to bakery owners.

The head of the Farmers Syndicate, Mohammed Barghash, told Al-Monitor that farmers could to stop the cultivation of dill, watercress, celery and parsley, all staple flavorings in the Egyptian kitchen. At a later stage, they could also stop the cultivation of onions, peppers and then tomatoes. “However, we will never stop growing wheat or corn, because this would cause the Egyptian people to starve,” Barghash said.

He added that the syndicate was waiting for the deputy head of the National Council for Human Rights, Shahenda Maklad, to fulfill her promise after she required them to write a letter with their demands to be sent to the president. These demands included stopping increases in the property tax on agricultural arable land, stopping increases in energy and fertilizer prices and forming a delegation of 27 farmers from all provinces to meet with the president to discuss their situation.

The official spokesman for the Agriculture Ministry, Mohammed al-Barghouti, accused farmers of fomenting trouble only to make complaints later on before the government. In a telephone interview with Al-Monitor, Barghouti said, “There are 13,000 farmer syndicates in Egypt, all convinced that the government has been conspiring against them.

“Who is responsible for the trade of subsidized fertilizers on the black market? Are they not the farmers? Who encroached on Egyptian agricultural lands only to sell them for urban construction? The infringements were made on 150,000 acres after the January 25 Revolution alone. They do not abide by the government instructions not to grow rice in restricted areas. They drain water while we are suffering from water scarcity,” he said.

Barghouti warned that if farmers continued this encroachment, agricultural lands in the valley and delta would disappear within the next 110 years, as their current area does not exceed 6.5 million acres.

He also denounced the farmers’ accusations that the Agriculture Ministry had allied with traders against them with regard to rice exports after selling the crop. He stressed that the decision was made based on a field study, which confirmed that only 10% of the crop had been sold.

Barghouti said farmers were victims of ignorance and the corrupt agricultural regime that existed before the revolution. Before this period, President Hosni Mubarak’s regime had destroyed the entire agricultural awareness system.

Regarding threats to stop the cultivation of certain crops, Barghouti said these were empty, as Egyptian women would not go so far as to import the ingredients of salads they grow on their homes’ porches and balconies.