How Egypt plans to address its growing water crisis

As Egypt faces its worst water crisis in 100 years, farmers are stuck between their need to cultivate cash-generating crops that require a lot of water and the Egyptian state's ban on water-thirsty crops. 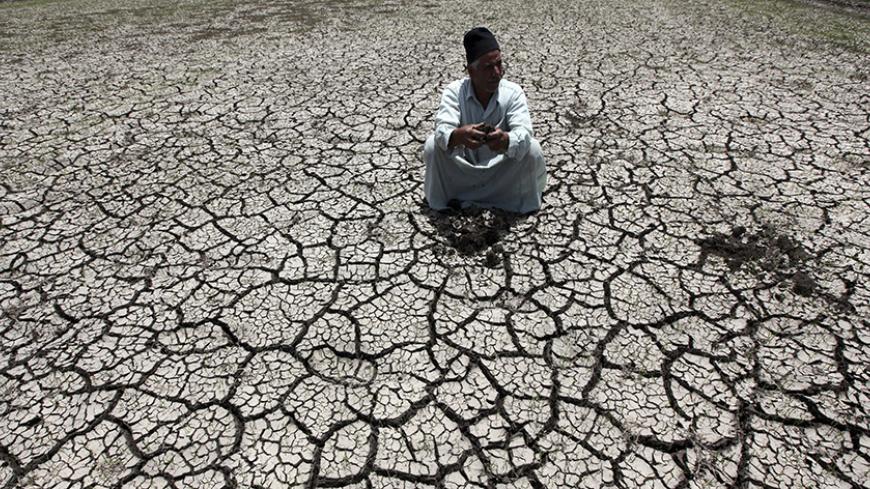 An Egyptian farmer squats down on cracked soil to show the dryness of the land due to drought at a farm formerly irrigated by the Nile River, in Al-Dakahlya, June 4, 2013. - REUTERS/Mohamed Abd El Ghany

Amidst the worst drought to hit the Horn of Africa in the past 100 years, the Egyptian Ministry of Water Resources and Irrigation declared a state of extreme emergency in early May to last until next August in preparation for the summer crop season. The ministry also launched extensive campaigns to eradicate and burn water-thirsty rice crops.

In villages, farmers intensified their demonstrations against agents from the Department of Agriculture and the Ministry of Water Resources, who sprayed incendiary compounds on rice crops planted in violation of the ministry's decision prohibiting the cultivation of rice, which it confined to an area of about 1 million acres in specific areas of the Nile Delta.

Nabil Al-Shahat, one of the farmers who violated the Al-Sharqia governorate's rice-growing ban, told Al-Monitor, "My children will starve all year if I implemented the government's decision and refrained from planting rice on the one and a half acres that I own." He explained that the high price of rice, which is a staple in the diet of Egyptian farmer families, precluded them from abiding by the ministerial decision, which would lead to hunger among peasant families.

In that regard, a government report indicated that total land surfaces planted with rice had increased by 1 million acres in just one month, rising from 174,000 on April 5 to 1.175 million on May 30.

According to Shahat, in the summer seasons of past years, he used to plant corn on his land in order to avoid violating the rice ban. He said, "Last year I found no buyers for my corn, and the government did not provide any marketing services to compensate for my loss. Now, even if no buyers are available, I will store the rice and use it to feed my family. Because I grew rice, Ministry of Irrigation officials punished me by cutting off my water supply. But I overcame that setback by digging a well on my land. Although it is somewhat briny, the well water is fresh enough to satisfy my needs while also serving to quench my family's thirst in light of the lack of clean water in the village."

In contrast, the former head of the Egyptian Farmers Union, Mohammad Barghash, told Al-Monitor that some farmers violated the decision, not to satisfy any immediate needs, but to take advantage of high rice prices. All those who cultivated 1 acre of rice in past years planted 10 acres this year, which threatens to exhaust yearly water allowances on one summer crop at the expense of other crops at a time when Egypt is suffering from a water crisis.

Barghash asked the United Nations to adopt an initiative aimed at countries suffering from water shortages, among them Egypt, in confirmation of their citizens' rights to live and preserve their water rights.

Barghash's calls come in the context of current fears among Egyptians concerning the entry into operation of Ethiopia's Renaissance Dam, and the resulting potential decrease in Egypt's 55.5 billion cubic meter annual water quote from the Nile.

In that regard, Hussam Maghazi, former minister of water resources and irrigation, told Al-Monitor that Egypt's water-rationing crisis was now of utmost importance and required the combined efforts of the state and the ministry in order to educate citizens and farmers that the water-rationing decisions adopted by the state served the people's interests. He said, "Farmers must understand that, due to water scarcity, planting water-thirsty crops such as rice is no longer possible in Egypt."

In addition, according to statements made to Al-Monitor by Agriculture Committee member in the Egyptian Parliament, Mohamed Hilmi al-Sherif, no leniency would be shown toward those who violate the rice-planting ban this year. This is a decision that has been agreed upon between parliament and the government.

Sherif warned that a state of confusion has reigned over government decisions lately, resulting in this high number of rice-planting violations — among them the decision to allow rice exports, which led to a two-fold increase in rice prices and encouraged farmers to plant said crop despite the imposed ban.

Haitham Awad, chairman of the Department of Irrigation and Hydraulics at Alexandria University, explained that confining the cultivation of rice to Delta governorates was to ensure that Mediterranean Sea waters did not encroach onto those lands and the wells located therein. He further pointed out that the rice cultivation ban and restricting its cultivation to certain areas was technically taken in past years yet not enforced on violating farmers through the imposition of fines. But the situation is much different this year.

Engineer Walid Haqiqi, spokesperson for the Ministry of Water Resources and Irrigation, told Al-Monitor, "Egypt can no longer afford to waste water." He argued that exporting water-thirsty crops was a waste of water, and the cultivation of crops such as rice, bananas and sugarcane had become a burden on available Egyptian water resources. As a result, land allocated for their cultivation must be scaled back and coordination initiated with the Ministry of Supply to only allow the cultivation of quantities needed to satisfy established local needs. Doing so would free water resources needed for the cultivation of other crops as well as satisfy the country's drinking water and development needs.

Haqiqi also confirmed that the Nile's water output last year was below its annual average due to the drought that has stricken the Nile Basin and Ethiopia. As a result, Cairo was forced to siphon large quantities of water from its strategic reserves at Lake Nasser.

Exterminating water-thirsty crops, developing awareness campaigns calling for water-saving measures and the statements made by Foreign Minister Sameh Shoukry that Ethiopia's Renaissance Dam was now a fait accompli all clearly indicate that Egypt's political leadership wants citizens and farmers to become partners in shouldering the responsibility for the water crisis plaguing the country.