With a growing population, limited water resources, and the prospect of a decreased annual share from the Nile River, Egypt finds itself obliged to revert to water-saving agricultural practices. 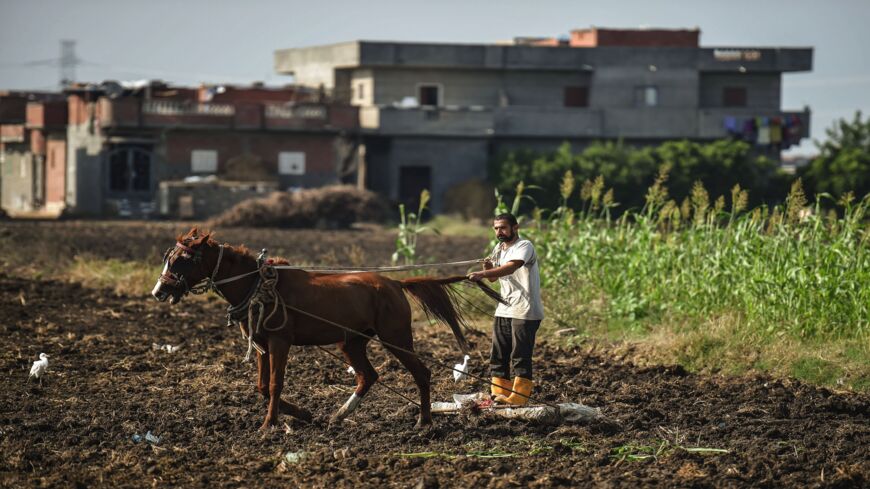 A farmer waits for the irrigation system to finish watering his field in Kafr al-Dawar village in northern Egypt's Nile Delta, on Nov. 26, 2018. - MOHAMED EL-SHAHED/AFP via Getty Images

CAIRO — Egyptian authorities have disclosed a new strategy to conform to limited water resources amid expectations of a reduced annual share from the Nile River because of the dam constructed by Ethiopia.

Egypt's Agriculture and Land Reclamation Minister Al-Sayed al-Quseir has said that his country's farmers would have to limit the cultivation of water-intensive crop species, including food grains and cash crops.

At an April 27 conference on Egypt's new structural reforms strategy, Quseir also said farmers would have to expand the cultivation of crop species that need small amounts of irrigation water to grow.

"We will have to put limits on the cultivation of water-intensive crop species," the minister said.

Egypt's agricultural sector employs 30% of its labor and contributes 14% to its gross domestic product. However, agricultural activities eat up 85% of Egypt's annual water share from the Nile River, its only source of water.

This share has been the same for hundreds of years, even as the population, now at 100 million, keeps growing steadily.

The new strategy is a serious bid by Egypt to adapt to expected water shortages as Ethiopia moves ahead with the construction of the Grand Ethiopian Renaissance Dam (GERD), Ministry of Agriculture officials said.

"Water shortages are a major challenge for us," Mohamed al-Qersh, official spokesperson of the Egyptian Ministry of Agriculture, told Al-Monitor. "This is why we have formulated a strategy that aspires to protect every drop of water available."

Ethiopia made its first filling of the dam reservoir in July last year and plans a second filling during the rainy season in July this year.

The two downstream states, Egypt and Sudan, warn against the effects the second filling of the dam reservoir will have on them, with Sudan saying this filling will threaten the lives of 20 million Sudanese citizens, almost half of the population of 43 million.

Egypt, specialists said, would be immediately and directly affected by the second filling of the dam reservoir.

"The second filling of the Ethiopian dam will come at the cost of water reserves behind the High Dam in southern Egypt," Mohamed Nasr Allam, Egypt's former minister of irrigation, told Al-Monitor.

"These reserves will come to an end, negatively affecting the ability of the High Dam to generate electricity."

Almost a decade of negotiations between the three countries produced no results, namely a legally binding agreement on the filling and the operation of the dam.

Egypt, Sudan and Ethiopia are also locked in a game of unending accusations. Egypt and Sudan say Ethiopia lacks the political will to sign a deal and uses the negotiations as a time-wasting card until the dam reaches the point of no return.

Ethiopia, for its part, says the two downstream countries have caused the failure of negotiations on the dam, including the latest round of African Union-sponsored ones in Kinshasa, the Democratic Republic of Congo, in early April.

Addis Ababa also says it will not sign a deal that limits its ability to implement projects that utilize its own water resources.

"A reduced share from the Nile will make Egypt's water crisis even worse and threaten agricultural expansion projects," Allam said.

The newly declared structural reforms strategy is a small detail in Egypt's adaptation to current and future water shortages.

The strategy will limit the space cultivated with water-intensive crop species, including rice, the Ministry of Agriculture said.

Egypt will cultivate around 750,000 acres of land with water-intensive rice this year, down from 1.1 million acres in 2019.

Qersh said his ministry's researchers have succeeded in developing new drought-tolerant rice species and others that need small amounts of water to grow.

"We have succeeded in convincing a large number of the rice farmers to scrap water-intensive rice species for the new species," he said.

Agricultural authorities will also limit the cultivation of other water-intensive crops, including bananas.

Egypt's other adaptation strategies include the construction of dozens of sewage treatment plants and seawater desalination plants.

Cairo said it would invest $50 billion in water projects between 2017 and 2037, including in wastewater and desalination plants.

Apart from expanding protected farming, which allows the cultivation of all types of crops with the use of the smallest amounts of irrigation water, Egypt is also lining thousands of kilometers of water canals to prevent water loss — including through leakage — and distribute irrigation water fairly among farmers, including those whose farmland is located at the end of the canals where irrigation water does not usually arrive.

The Egyptian government has allocated $1.1 billion for the first phase of the project for lining irrigation canals, a project that is transforming the Egyptian countryside and ensuring the presence of irrigation water for a large number of farmers.

Nevertheless, the adaptation strategy — or what is called structural reforms by agricultural authorities — is costing Egypt dearly in terms of money and food security, observers said.

Egypt has specified a sizeable amount of its budget for the implementation of the aforementioned projects, including the construction of the wastewater treatment and seawater desalination plants.

A decreasing water supply from the Nile will mean this country will be less food secure in the future, observers said.

Egypt imports a sizeable amount of its food. Food imports are expected to increase even more in the future, with Cairo working tooth and nail to tailor its continually decreasing water supplies to the needs of its growing population, observers said.

"The drop in the national water supply will necessarily widen the gap between food production and consumption and consequently force our country to import more food," Sayed Khalifa, head of the Agricultural Professionals Syndicate, a guild of agriculture workers and engineers, told Al-Monitor. "This will be very costly for the national economy."