An Egyptian scientist and head of the National Rice Development Project at the Ministry of Agriculture invented a new type of rice that does not need much water, after the Egyptian government announced that the country is suffering from water poverty. 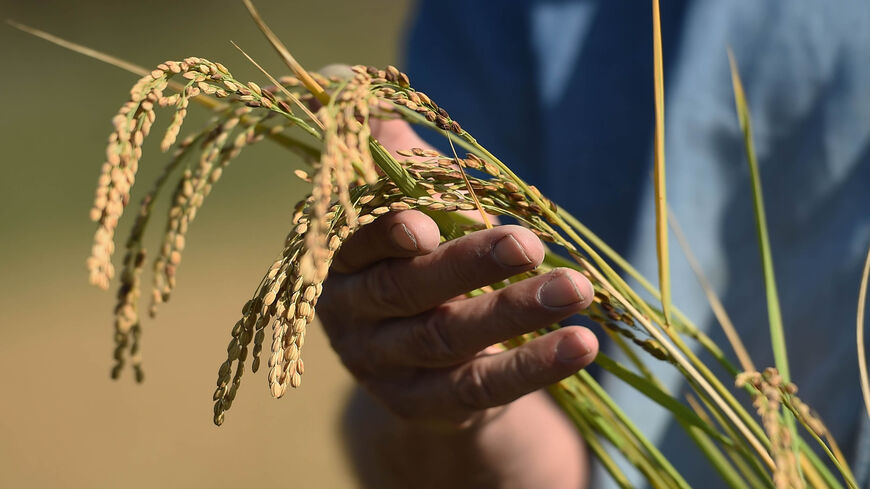 CAIRO — Egyptian Minister of Agriculture El-Sayed al-Qusayr honored April 15 Hamdi al-Mawafi, head of the National Rice Development Project at the Egyptian Ministry of Agriculture, as the latter received in early April the gold medal at the 2022 Geneva International Exhibition of Inventions, for an applied innovation by devising the giant “Sakha Super 300” rice variety, which withstands water scarcity.

On April 6, Mawafi said during a TV interview, “The high productivity per acre of the new type of rice will contribute to the Egyptian state’s vision and endeavors to achieve rice self-sufficiency and export some quantities abroad.”

Mawafi said, “The new variety tolerates soil salinity, which enables the state to extensively plant it in the governorates of Kafr el-Sheikh, Beheira, Gharbia, Dakahlia, Damietta and Sharqia, as well as in reclaimed lands affected by soil salinity and water scarcity.”

He continued, “The new type of rice is characterized by the quality of grains and the ability to withstand difficult climate conditions [water scarcity, salinity and heat].”

Egypt has been suffering from water scarcity for years. In late February, Egyptian Prime Minister Mostafa Madbouly announced that Egypt had officially reached the stage of water poverty when the Egyptian population reached 55 million.

Speaking at the launching event of the national project for the development of the Egyptian family in the new administrative capital on Feb. 28, Madbouly said that the population of Egypt reached 103 million in March, according to the Central Agency for Public Mobilization and Statistics, at a time when Egypt is currently receiving a steady 62 billion cubic meters of water. He explained that this amount includes the 55 billion cubic meters from its shares from the Nile water in addition to water provided by other resources.

On the Egyptian government’s efforts to conserve water, Madbouly said, “All state institutions are deploying strenuous efforts across Egypt with the support and directions of the political leadership to implement projects aimed at conserving every drop of water, leverage our water resources and cover the current needs of the existing population through the treatment of agricultural and wastewater, desalination of seawater, disinfection of lakes and lining of canals.”

Abbas Sharaki, professor of geology and water resources at Cairo University, told Al-Monitor, “Egypt faces challenges in achieving water security because it is located in one of the most rain-scarce regions of the world. It secures 97% of its water needs from the Nile River that flows from outside the borders from two main sources: Ethiopia — 85% of the water flowing to the Nile — and the tropical region — 15%. Also, Egypt’s annual share has been at a steady 55.5 billion cubic meters since the construction of the High Dam in 1964 to date.”

Sharaki said, “The challenges facing Egypt in achieving water security are the rapid growth of the population. Egypt’s population is expected to reach 143 million people in 2050, at a time when the population growth is not matched by an increase in water resources amid an increase in the standard of living as well as the average per capita consumption.”

He noted, “Among the challenges facing water security in Egypt is the excessive use of water in the field of agriculture, which consumes about 80% of the available water, while the remaining 20% is used for domestic and industrial purposes.”

He explained, “The cultivation of some water-intensive crops in the Egyptian lands — such as rice, sugar cane and bananas — consumes a large part of the water resources.”

Sharaki added, “The Egyptian authorities are working to benefit from every drop of water that they get; they have established water projects such as building the High Dam, digging canals and agricultural drains, implementing modern irrigation, and building several small dams to protect the population from the dangers of torrential rains and to preserve water. They also worked on developing the crop structure to derive high-yield crops that use less water and withstand climate fluctuations.”

Asked about the external threats to Egyptian water security, Sharaki replied, “The external threats emanate from the upstream countries’ failure to adhere to water agreements and their establishment of some water projects, as is the case with the Grand Ethiopian Renaissance Dam [GERD] project, which poses a major challenge for Egypt’s water security.”

On April 25, well-informed sources told the Egyptian Cairo24 news site that the Ethiopian authorities had begun the process of elevating the middle corridor of the GERD, in preparation for the third filling process.

The Ethiopian steps come in light of the faltering GERD negotiations amid Egypt’s and Sudan’s calls for a binding legal agreement on the rules for filling and operating the dam in accordance with the decisions of international law.