Egypt has recently agreed with the Russian Rusnano Group to develop its local components and build more desalination plants to face the water scarcity that could result from the Ethiopian dam being built on the Blue Nile. 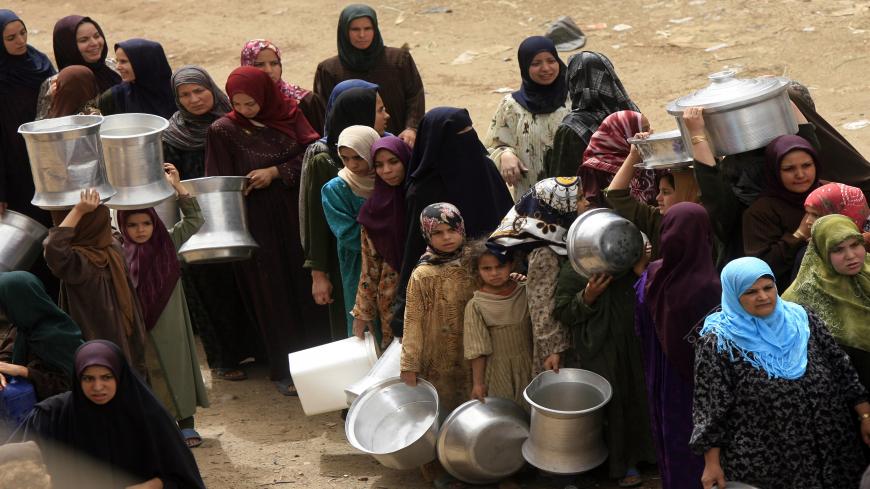 Egyptian women queue at a water cistern (unseen) to fill their containers with drinking water at al-Rahawe village, some 25 miles northeast Cairo, Egypt, May 27, 2010. - Khaled Desouki/AFP via Getty Images

The Egyptian government has taken unprecedented interest in seawater desalination, especially with the continuing failure of the Grand Ethiopian Renaissance Dam (GERD) negotiations and Ethiopia’s completion of 75% of the dam construction.

Egypt has used Russian expertise, in cooperation with the Arab Organization for Industrialization (AOI), the Egyptian armed forces’ Engineering Authority and the University of Alexandria, to promote the local production of seawater desalination.

During talks between the Russian Rusnano Group, the AOI and the Engineering Authority held via video call Jan. 22, Abdul Menhem al-Toras, head of the AOI, underlined the importance of exploiting local industrial capacities to cement domestic production and localize the technology of manufacturing the tools of water desalination stations.

“The aim behind this cooperation is to manufacture tools and components of the seawater desalination stations using national Egyptian expertise,” he said.

Toras pointed to an agreement between the participating parties on “a project to establish a specialized factory to manufacture seawater desalination membranes, in partnership with the Russians, using the technological capacities of the AOI and based on global quality standards at competitive market prices.”

Ever since the latest round of negotiations between Ethiopia and Egypt on filling and operating the GERD faltered, there have been increasing concerns about Egypt’s water situation and ways to ensure the citizen’s vital components at a reasonable cost and sufficient quantities. These concerns gave a major push to the endeavors to own necessary techniques for water desalination.

During his speech in parliament Jan. 24, Egyptian Minister of Water Resources and Irrigation Mohamed Abdel Ati blamed Ethiopia’s stubbornness for the failure of the GERD negotiations. Four meetings have been held under the African Union (AU) auspices, and five six-party meetings in the presence of the ministers of irrigation and foreign affairs of Egypt, Ethiopia and Sudan, he added. But Ethiopia’s obstinacy in the Nile dam file continued, Abdel Ati said, stressing that the GERD crisis concerns the whole Egyptian state and institutions, and each authority is doing its relevant part.

During the Jan. 22 virtual meeting, Toras praised the expertise of the Russian Rusnano Group, a prominent entity specialized in seawater desalination. He clarified that they agreed to boost the local components to produce techniques that would save on the expenses of importing components for the manufacture of desalination stations and reduce imports to decrease the spending of foreign currency. This step would also help localize production and reduce the price of one cubic meter of water and achieve high added value for the local industry, he noted.

Nineteen new desalination plants are scheduled to become operational within 18 months and will be added to the already existing ones, which amount to 65 stations located in six governorates.

President Abdel Fattah al-Sisi issued Decree No. 83 in September 2019, approving a 15 million Kuwaiti dinars (about $49.5 million) loan agreement between the Egyptian government and the Kuwait Fund for Arab Economic Development for a project to establish four seawater desalination stations in the south Sinai governorate. The agreement was signed in Sharm el-Sheikh. The project is expected to be launched at the end of 2021 and will be completed within a year and a half.

Hossam Shawky, director of the Egypt Desalination Research Center of Excellence, told Al-Monitor over the phone that the country’s water treatment and desalination strategy is ambitious, as water desalination is one of Egypt's most important strategic options in facing the expected scarcity of water, and using it as drinking water with the gradual shift in dependence on desalinated water in coastal and remote areas, as well as in touristic areas.

He explained that the state’s strategy is divided into two axes: The first includes the implementation of a number of seawater desalination plants, and the second includes the completion of sewage water treatment projects in all governorates. He said that the implementation of this strategy has already begun and is scheduled to be completed by 2050.

Shawky added that work is underway on two other axes, namely the expansion of the construction of water treatment plants using binary and ternary systems to ensure optimal and multipurpose use of water. Examples include al-Mahsama treatment plant and Bahr al-Baqar sewage water treatment plant with a capacity of 5.6 million cubic meters per day. The second axis comprises ground-water recharge and will be used in places affected by rain during the winter season.

In October, Egyptian Prime Minister Mustafa Madbouly announced that the government is implementing a plan including several projects to set the strategic water vision until 2037.

Madbouly indicated in a speech in parliament that the cost of this plan, which has already begun, amounts to 900 billion Egyptian pounds (about $57.3 billion), and includes a shift to modern irrigation in agriculture, rationalization of canals and drains, treatment of wastewater, and expansion of desalination plants for seawater or groundwater.