Egypt plans to build a desalination plant on the Euphrates River to help address acute water shortages in southern Iraq amid lack of rainfall and poor management of water resources. 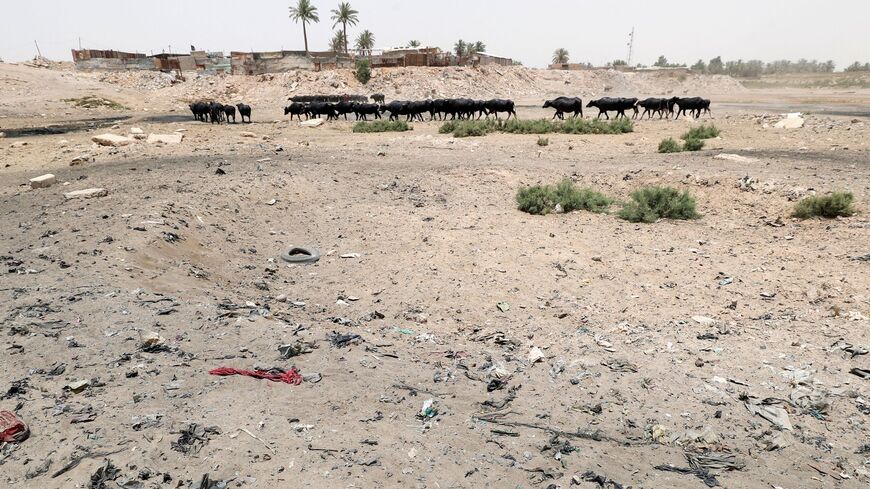 Buffalo graze by the bed of the dried-up Diyala River, which was a tributary of the Tigris, in the Al-Fadiliyah district east of Baghdad, on June 26, 2022. Iraq's drought reflects a decline in the level of waterways due to the lack of rain and lower flows from upstream neighboring countries Iran and Turkey. - AHMAD AL-RUBAYE/AFP via Getty Images

An Egyptian delegation of water treatment experts visited Iraq this month for talks with Iraqi officials on addressing an acute water crisis in the Arab country.

The Ministry of Irrigation and Water Resources said June 20 that the Egyptian delegation discussed a proposal for building a water desalination plant on the Euphrates River. The station will be used to purify and desalinate seawater to help ease water shortages in southern Iraq.

Minister of Irrigation Mohamed Abdel-Ati said the visit was part of an agreement between Cairo and Baghdad to benefit from Egypt’s expertise in water management.

“Egypt and Iraq are keen on making the best use of their water resources amid challenges facing the two countries in the field of water,” he added.

The proposed plant on the Euphrates River will be modeled on Egypt’s Bahr al-Baqar wastewater treatment plant, the largest of its kind in the world. The plant has a production capacity of 5.6 million cubic meters per day.

Iraq was known in ancient times as Mesopotamia, or the land between two rivers — the Tigris and the Euphrates. The country is facing its worst drought in decades amid lack of rainfall and poor management of water resources.

Iraq relies on the Tigris and Euphrates rivers for nearly all of its water needs. The two rivers originate in Turkey and flow to the Shatt Al-Arab basin in southern Iraq. While the Euphrates River crosses Syria and Iraq, the Tigris flows from Turkey into Iraq.

Turkey contributes 90% to the Euphrates River while Syria contributes 10% to the water flow. As for the Tigris, Turkey, Iraq and Iran contribute 40%, 51% and 9%, respectively.

Dams constructed by both Turkey and Iran on the two rivers, however, have either blocked or diverted water into Iraq, creating acute water shortages there.

According to the Iraqi Ministry of Water Resources, the two rivers are forecast to dry up by 2040 unless action is taken to change the current trends. The country’s Sawa Lake already dried out this year, and Razzaza Lake is shrinking.

Southern Iraq faces particularly serious water shortages. The lack of water flow out of the Tigris and Euphrates rivers combined with the rising sea level is pushing salt water from the Arabian Gulf into Iraq’s rivers.

“The crisis is exacerbated by the increased salinity, rising sea level and lack of flow from the Tigris and Euphrates rivers into Iraq,” Alwash, founder and CEO of the environmental group Nature Iraq, told Al-Monitor.

He said climate change causes temperatures to rise and leads to increases in the level of evaporation. The World Bank forecasts that a temperature increase of 1 Celsius would cause a 20% reduction of available freshwater in Iraq by 2050.

“For instance, Lake Tharthar, one of the largest lakes in Iraq, loses around 7 billion cubic meters of water in evaporation every year,” Alwash added.

According to the United Nations Environment Program, Iraq ranks as the fifth most vulnerable country in the world to climate change. Last year, the World Bank warned that southern Iraq is already exceeding “critical water quality thresholds,” often too contaminated for people to use.

Abbas Sharaky, professor of geology and water resources at Cairo University, said Egypt has major expertise in water desalination and the reuse of wastewater from which Iraq can benefit.

“There is a similarity in the water situation in both Iraq and Egypt,” Sharaky told Al-Monitor by phone. “While the Nile River, Egypt’s only source of fresh water, originates from outside the border in Ethiopia, the Tigris and Euphrates rivers on which Iraq relies originate from Turkey and Iran,” he said.

“Both Cairo and Baghdad are engaged in disputes with upstream countries regarding the construction of dams on rivers without consent from downstream countries,” he added.

Egypt and Ethiopia are at odds over the construction of a giant hydroelectric dam on the Blue Nile, a main tributary of the Nile River. While Cairo views the Grand Ethiopian Renaissance Dam (GERD) as an existential threat to its water share from the Nile, Addis Ababa sees it as vital to its economic development.

Years of negotiations between Egypt, Ethiopia and Sudan to reach a legally binding agreement on the filling and operation of the GERD have failed to make any breakthrough.

The Egyptian government has adopted an ambitious plan to build dozens of plants for seawater desalination to help meet the country’s growing water needs. So far, Egypt has constructed 82 desalination plants, with a total water capacity of 917,000 cubic meters per day. The government is also planning to build 14 new desalination plants to raise the capacity of water to 1.4 million cubic meters per day. Egypt has also launched a project worth 80 billion pounds ($4.26 billion) for rehabilitating canals with total lengths of 20,000 kilometers.

Sharaky said Egypt has state-of-the-art water research centers specialized in the hydrology of rivers and the development of irrigation and water supply systems.

“Egypt has made long strides in building water treatment plants, the reuse of wastewater and constructing dams for harvesting rainwater, and Iraq can benefit from this Egyptian expertise in dealing with the acute water shortages in the country,” he said.