The Egyptian government is seeking to expand seawater desalination projects in the upcoming period, especially in coastal and border cities, by establishing 14 new plants. 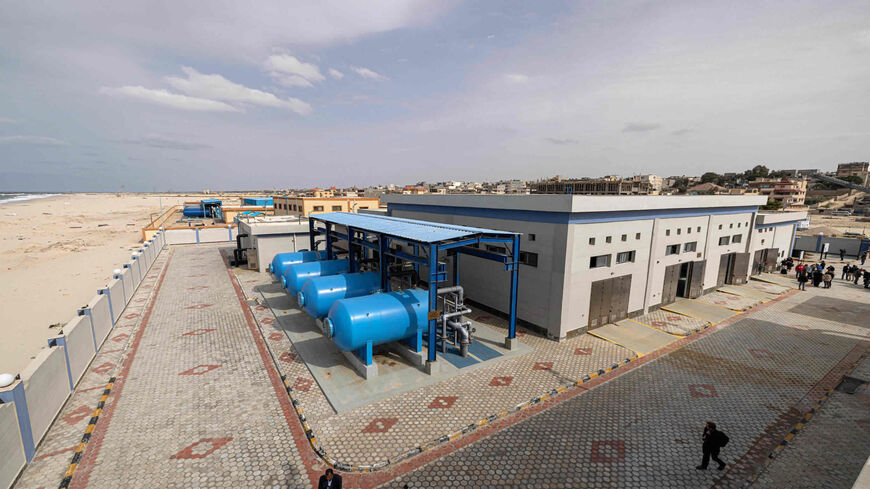 CAIRO — The Egyptian government announced May 26 its decision to expand seawater desalination projects in the upcoming period, especially in coastal and border cities, by building 14 new plants.

The project, according to the government, aims to raise the total water capacity of desalination plants in the country to about 1.4 million cubic meters per day.

This comes amid the faltering negotiations on the Grand Ethiopian Renaissance Dam (GERD), as Ethiopia is getting ready to implement the third filling phase of the dam’s reservoir.

On May 26, Prime Minister Mostafa Madbouly chaired a Cabinet meeting attended by several ministers and officials to follow up on plans to expand the establishment of seawater desalination projects.

He ordered the formation of a technical committee to receive offers from companies seeking to implement new seawater desalination projects, and to negotiate in order to reach the best offered prices.

Madbouly assigned government agencies to secure the necessary lands needed to implement desalination projects, as well as lands for industrial projects that will be established to provide the required inputs for desalination plants, such as manufacturing equipment used in desalination.

Egyptian government spokesman Nader Saad said in a statement May 26 that the government had prepared a “five-fold plan” to expand the establishment of seawater desalination projects from 2020 to 2050.

The plan, he continued, aims to secure water needs for urban development goals and to meet the requirements of the future natural population increase.

There are currently 82 desalination plants operating in Egypt, with a total water capacity of 917,000 cubic meters per day.

The establishment of 14 new plants would raise the total capacity of water to 1.4 million cubic meters per day, according to Saad.

Mohamed Nasr al-Din Allam, former Egyptian minister of water resources and irrigation, told Al-Monitor, “Egypt is forced to implement seawater desalination projects as a result of the lack of sufficient freshwater resources that are used for agricultural and drinking purposes. These projects are crucial despite their high cost and as they drain the government. This is particularly true although we are historically known as the country of the Nile.”

Deputy Minister of Irrigation for Major Projects Muhammad Omar had said in a statement in 2021, “The cost of producing one [cubic] meter in desalination plants reaches up to 15,000 Egyptian pounds [$805], and the cost of establishing one desalination plant is four times greater than the construction of an ordinary water purification plant.”

Allam explained, “The water that was analyzed is used for drinking purposes only, not for agriculture. Desalination projects will not solve the problem of water deficit that Egypt has been suffering from in recent years. Egypt’s water situation is certainly facing a great danger in light of the continued construction of the Ethiopian dam.”

Allam noted, “The water desalination projects mainly aim to cope with the water crisis that Egypt is witnessing, by providing water to the new cities that are being implemented by the government, because there are no other alternatives to provide water for these cities.”

He explained, “Despite the need of these projects at this stage, they are not the best solution [due to their cost and threat to marine life.]"

This is what the Egyptian premier pointed to in a May 26 statement, in which he spoke of his country’s interest in expanding the establishment of seawater desalination projects during the next phase, especially in coastal and border cities, given the importance of these projects in providing part of the local water needed to support various development purposes.

The number of new cities that are and have been established since 2014 reached 30, with a total investment of 690 billion Egyptian pounds ($37 billion), including New Alamein, the Administrative Capital and the New Toshka city.

Muhammad Daoud, professor at the government-owned National Water Research Center, told Al-Monitor, “Many seawater desalination plants have been established in coastal cities since 2014. More projects were launched in recent years with the establishment of stations in the northern and southern Sinai Peninsula, Hurghada and al-Ain, Sokhna and al-Alamein.”

Abbas Sharaki, water expert and professor of geology and water resources at the Institute of African Studies and Research at Cairo University, told Al-Monitor, “New urban communities are expanding in the desert and coastal areas, moving away from the Nile waters.”

He noted, “Therefore it would be more beneficial to desalinate water within these communities instead of transferring water from the Nile, because the cost of transportation is expensive in addition to water waste during transportation."

Sharaki said, “As long as there is a water shortage, desalination is the appropriate way to meet the needs of new urban communities, and these projects benefit the tourist and industrial areas that are located far from the urban areas around the Nile River.”

However, he added, “Seawater desalination is economic if it is used for tourism, industry or domestic use, but it is completely uneconomic if used in agriculture. The real problem facing Egypt lies in the lack of water needed for agriculture, which consumes more than 80% of our water resources.”

While Sharaki considered that seawater desalination is not directly related to the faltering GERD negotiations, he stressed that “proceeding with the third filling of the dam will cause great harm to Egypt — politically in the first place, as Addis Ababa continues to turn a blind eye to the demands and fears of both Cairo and Khartoum.”

He added, “Second, in terms of Egypt’s share of water, since part of the stored water will be deducted from the quantity that reaches us."

Allam concurred with Sharaki, saying, “Despite the absence of new intentions by Ethiopia to enter into new negotiations, Egypt is sticking to its historical share of water to meet its various needs, and will not give up a single drop of water.”