Egypt is considering bids from international companies to take on seawater desalination projects that would increase its water resources and address the negative effects of the Grand Ethiopian Renaissance Dam. 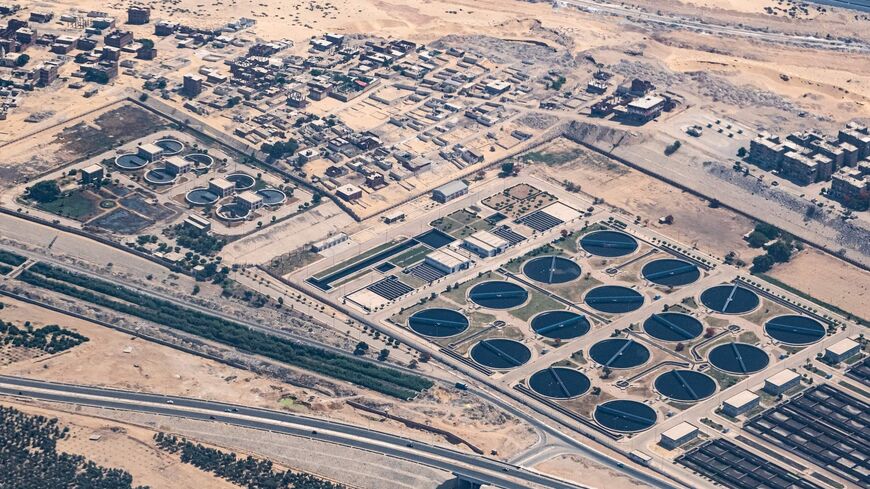 This picture taken on May 28, 2021, shows an aerial view of the Ard al-Berak water treatment plant on the northeastern outskirts of Egypt's capital Cairo. - AMIR MAKAR/AFP via Getty Images

CAIRO — Egypt is exploring ways to increase its water resources and offset any negative effects of the Grand Ethiopian Renaissance Dam (GERD) in light of the stalled tripartite negotiations between it, Sudan and Ethiopia.

Egypt, Ethiopia and Sudan have been in a deadlock over the GERD since April. The crisis was raised more than once before the UN Security Council — most recently in July — which referred it back to the African Union, but to no avail. Ethiopia continues to fill the GERD reservoir, disregarding objections raised by Egypt and Sudan.

On Aug. 9, Algerian President Abdelmadjid Tebboune called for a direct meeting between the three disputing parties. Algeria, along with the UN, US and EU, would mediate the meeting under the AU sponsorship. He noted that the initiative was welcomed by the disputing parties, but no date has been set for resuming negotiations.

Experts and observers contacted by Al-Monitor stressed the critical importance of seawater desalination projects to keep pace with population growth and urban expansion in Egypt. They explained that these alternatives are intended to increase water resources hit by acute shortages, especially amid the crisis ensuing from the GERD and its potential damage to Egypt.

Mahmoud Abu-Zeid, the head of the Arab Water Council and Egypt's former water minister, attributed the severe water scarcity to a massive population increase. Speaking to Al-Monitor over the phone, Abu Zeid explained that desalination is used to produce water for drinking but the process cannot meet the needs of irrigation and agriculture due to its very high cost. “The state resorted to lining canals and modern irrigation techniques to reduce water losses,” he said. “It focused on raising citizens’ awareness about the need to rationalize their water consumption. The state is also searching for more nontraditional sources such as storing rain and flooding, benefiting from groundwater and treating agricultural wastewater.”

He added that Egypt and Sudan have been forced to protect their historical rights in the Nile waters, saying, “Both Egypt and Sudan are determined to reach a binding legal agreement with Ethiopia through international mediation that would preserve the rights of the three disputing countries.”

Abu Zeid expects a promising future for the seawater desalination industry in Egypt, citing a political will to localize the modern technology.

Abbas Sharaki, head of the department of water resources and geology at the Faculty of African Studies at Cairo University, believes Egypt needs desalination projects in coastal cities far from the Nile River. He also explained this method is too expensive be used in agriculture.

Sharaki told Al-Monitor, “The continued urban sprawl and creation of new cities made it urgent for the state to implement seawater desalination projects. Around 16 new cities have been constructed at a great distance from the Nile and close to the coasts such as El Galala, Ain Sokhna, the New Administrative Capital, Hurghada, North and South Sinai, Marsa Alam and others.”

Sharaki, however, warned that feasibility studies are needed to evaluate seawater desalination projects, explaining, “The global average cost of water production from similar projects is $1 per cubic meter.”

Hossam Moghazy, the head of irrigation and hydraulics department at the Faculty of Engineering at Alexandria University, said that there is a water deficit in Egypt of 25 billion cubic meters. He told Al-Monitor it is due to the population increase of 2.5 million people annually while the water available from the Nile has remained the same. “Consequently, wastewater treatment projects are necessary to allow the reuse of this water, along with rainwater, flooding and groundwater to compensate for the deficit,” he added.

He noted that Egypt depends on the Nile River to meet 95% of its water needs, adding, “The urban expansion triggered by the population increase made it necessary to establish seawater desalination projects to generate drinking water for coastal cities.”

Moghazy, who is also a former water minister, believes Egypt will be a promising market in the future for seawater projects. “There are efforts by the state to localize this industry in order to reduce its cost while tapping the latest technological means to achieve the highest quality and lowest cost,” he concluded.