With negotiations over the Grand Ethiopian Renaissance Dam stalled, the Egyptian government is building a massive water treatment plant in Giza governorate in a bid to address water scarcity. 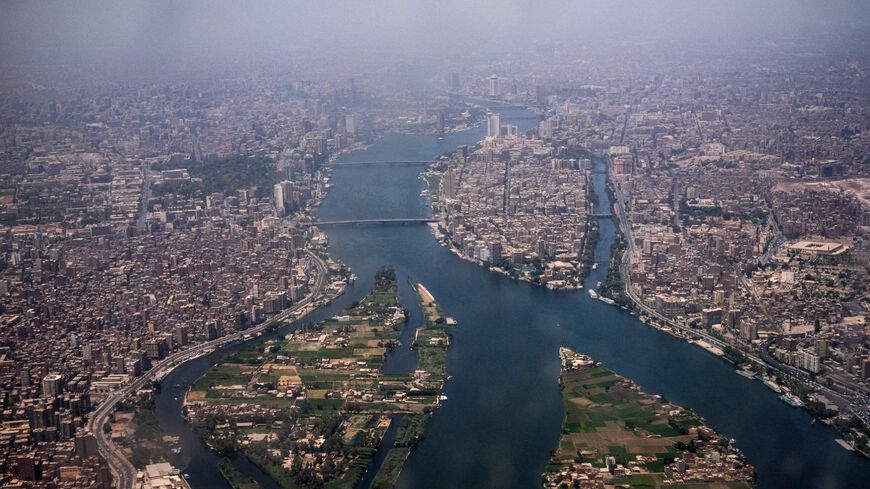 This picture taken on May 14, 2021, shows an aerial view of Egypt's capital, Cairo (R), and its twin city of Giza (L), showing the historic old Cairo district (R) and the Nile River islands of (bottom L to R) Qorsaya and Dahab, and the island of Manial al-Roda (C). - AMIR MAKAR/AFP via Getty Images

The Egyptian government is building a large water treatment plant on the outskirts of Cairo to help address the country's drinking water shortage.

In a statement posted Aug. 5, Ahmed Rashid, governor of the Giza governorate where the plant will be located, said the Dahab Island water plant will be fully operational after the completion of trail tests and will have a final production capacity of 160,000 cubic meters per day. During the latest trial tests, the plant was run at a production capacity of 80,000 cubic meters per day, he added.

Rashid said the operation of the plant in further trial phases will enhance water services and address low water pressure and cuts in some areas of Giza that experience high temperatures.

The first phase was completed back in 2019, said May Salah, executive director of the Dahab Island water plant expansion project. The project, supervised by the executive authority for water and sanitation projects in the Ministry of Housing, is expected to be completed and formally inaugurated by July 2022, Salah added.

She said the plant will operate with a total capacity of 160,000 cubic meters per day and purify water using the modern DynaSand technology, which filters water through sand. “The land area required for the operation of the plant is available, as well as the electricity needed for operation," she said.

Salah said the estimated cost of the Dahab Island water plant expansion project is about 640 million Egyptian pounds ($41 million). The first phase that started in 2019 was completed, and expansions are being implemented for the second phase in order to achieve the maximum possible production.

“This project is all the more necessary given Egypt's increasing population and the Grand Ethiopian Renaissance Dam (GERD) crisis. We were instructed to implement national projects that help solve water problems in some areas of the Giza governorate,” Salah added.

Egypt and Ethiopia have been at odds over the latter's construction of a multibillion-dollar hydroelectric dam on a main tributary of the Nile River, which Cairo fears will threaten its water supply.

She predicted Egyptians "will be seeing more projects to support the drinking water and sewage networks and address problems — including low pressure impacting drinking water supply lines and sewage overflows.”

Sayed Ismail, deputy minister of housing for infrastructure affairs, said there are more than 480 water treatment plants across Egypt, including advanced secondary and tertiary treatment plants. He told Al-Monitor the ministry has been implementing a three-year plan aimed at improving the water supply situation in Egypt and thus preserving citizens' health and quality of life.

He added, “The beginning was in Upper Egypt with a program that included 60 sewage treatment plants for a total capacity of 1.4 million cubic meters per day. In 2014, Egypt had around 300 treatment plants, and now we have reached 480. One-hundred and eighty new facilities were implemented and operated, including 60 plants in Upper Egypt aimed to maintain the quality of the Nile River water and the quality of waterways and agriculture.”

Ismail said 150 new facilities are currently being constructed in the other governorates of the Nile Delta at a cost of 31 billion Egyptian pounds ($1.97 billion), with a total capacity of 5 million cubic meters per day.

He explained that in the past, the government's focus was on the safe disposal of wastewater. Now, he said, there is a new concept focused on the safe reuse of water. “Treated wastewater is used directly in agriculture [for irrigating crops], as well as indirectly by being added to the water system of canals and ducts” that are used to water fields, he elaborated.

Ismail indicated that the water generated by the treatment plants is not used for drinking despite its purity and quality, and 96% of wastewater is treated in urban areas, while the figure stands around 38% in rural areas and villages. He praised the Hayat Karima (Decent Life) initiative President Abdel Fattah al-Sisi launched in 2019 to achieve sustainable development goals in rural Egypt within three years.

Egyptian Prime Minister Mustafa Madbouly announced in October 2019 that the government is implementing a plan that includes a set of projects to combat water scarcity by 2037. In a speech before the Egyptian parliament, Madbouly said the plan was devised by top experts in the management of water resources, taking into account the population increase and the people's water needs.

Madbouly said the plan costs 900 billion Egyptian pounds ($57.19 billion) and includes a transition to modern irrigation in agriculture, improving use of canals and drains, wastewater treatment, and the expansion of seawater or groundwater desalination plants.