As Ethiopia continues to fill the reservoir of its controversial dam on the Nile River, Egypt is churning out ideas and projects to conserve water. 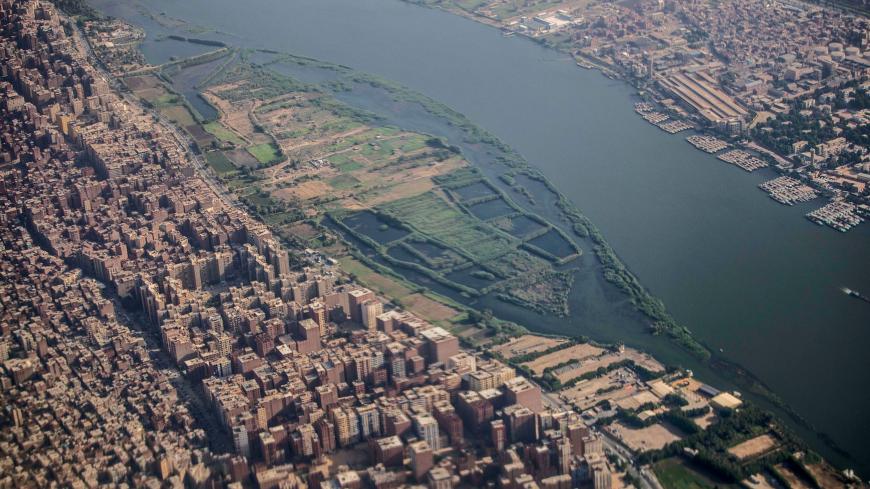 An aerial view shows the River Nile before sunset in the Helwan suburb south of the Egyptian capital Cairo on June 20, 2020. - KHALED DESOUKI/AFP via Getty Images

CAIRO — Ethiopia is carrying on with filling the Great Ethiopian Renaissance Dam reservoir, despite the lack of an agreement with the two downstream countries, Egypt and Sudan, threatening Cairo and Khartoum’s shares of the Nile water.

Egypt has responded by forming a strategy to deal with Addis Ababa's actions, starting with projects to reduce the effects of the GERD.

On July 28, Egyptian President Abdel Fattah al-Sisi said in a speech at the opening of the Robbiki Industrial City that the state is seeking to save “every water drop” through modern irrigation projects with investments worth 1 trillion Egyptian pounds ($62.5 billion).

He stressed that Egyptians are right to be concerned about the GERD, adding, “We will set up a 20,000-kilometer (12,400-mile) concrete lining for canals to reduce water loss. The villagers are helping [with a canal lining project] and within a year, we will reduce water loss and maintain water in drains and canals,” Sisi said.

“The state is well aware of what is happening and is taking preventive measures with desalination and water treatment plants. Egyptians should know that there is a comprehensive plan to manage water use,” he added.

During a July 23 meeting with the ministers of irrigation, housing and agriculture, Egyptian Prime Minister Mustafa Madbouly announced his initial approval for the allocation of four billion Egyptian pounds ($25 million) for the canal lining project.

Madbouly also pointed to the construction of desalination plants in coastal governorates and the establishment of treatment plants for wastewater. He stressed the need to increase fines and penalties for wasteful water usage and illegal tapping into water networks.

Madbouly’s meeting with the ministers followed Ethiopia’s July 21 announcement that it had completed the first phase of filling the dam’s reservoir. The move defied the Arab League's call for Ethiopia to wait for an agreement on the rules for the filling and operation of the GERD, during an emergency meeting held June 23 upon Egypt’s request.

Ethiopian Foreign Minister Gedu Andargachew celebrated the completion of the first phase of the dam’s filling. “It was the Nile River, and the river became a lake. It will no longer flow into the river. Ethiopia will have all the development it wants from it. In fact, the Nile is ours!” he said July 22.

Mohamed Nasr Allam, a former Egyptian minister of irrigation and water resources, told Al-Monitor the new water projects are necessary in light of Ethiopia's insistence on unilaterally filling the dam without a fair agreement to guarantee the water shares of the downstream countries.

“Egypt’s annual share of the Nile River amounts to 55.5 billion cubic meters, while its annual needs exceed 80 billion cubic meters. It relies on groundwater and rain to fill the deficit, yet it struggles to fully meet its water needs, even without a decrease in its Nile water share. This is why Egypt is looking into alternatives to secure water,” Allam explained.

“No project will be enough to meet Egypt’s water needs, especially for farmers, who will soon experience water scarcity should the [GERD] crisis remain unresolved,” he added.

On Feb. 10, Abdel Latif Khaled, head of the irrigation department and the Ministry of Water Resources and Irrigation, stated that 80% of Egypt's share of the Nile water is used in agriculture.

Mohamad Gamal, a professor of agricultural economics, said in a July 18 press statement that the first stage of filling will harm about 3.6 million farmers in Egypt. He estimated Egypt's economic losses at 54 billion pounds ($3.4 billion), in addition to an expected $900 million increase in imports to maintain food security.

“Should Ethiopia succeed in filling the dam with 74 billion cubic meters of water without reaching an agreement, the Egyptian people would face catastrophic consequences as a result of the interruption of electricity generation from the [Aswan] dam and the lack of water supplies during the drought years. No irrigation project could replace the Nile water,” Gamal said.

Mohamed al-Sebaei, spokesman for the Egyptian Ministry of Irrigation, said July 26 that Egypt fears prolonged drought, which is the main point of contention with Ethiopia. Egypt believes it is of paramount importance for both countries to cooperate in managing drought periods.

Samir Ghattas, a member of the Egyptian Parliament and head of the Middle East Forum for Strategic Studies, told Al-Monitor, “These projects are merely short-term palliative measures. The government is very late in addressing this issue.”

He expects Addis Ababa to continue to maneuver to prolong the ongoing negotiations sponsored by the African Union, and they can be predicted to falter, as happened when the United States was mediating the talks and failed to solve the crisis.

On Feb. 29, Ethiopia rejected US mediation and declined to attend the last round of talks in Washington, bringing the negotiations back to square one.

The three countries met again Aug. 3 for talks sponsored by the AU.

In a July 27 telephone interview on the Sada el-Balad satellite channel, Alaa Zawahiri, a member of Egypt's technical committee for the GERD negotiations, said the talks are expected to last two weeks, until Aug. 17. He expressed hope that a binding agreement will be reached.

Ghattas stressed that the military option is not on the table for the Egyptian government, as several regional parties were involved in the construction of the dam. He said that the Egyptian leadership’s only option is to resume negotiations and look for ways to manage water consumption.

During his July 28 speech, Sisi also ruled out military action with regard to the GERD, urging the press to drop the topic.