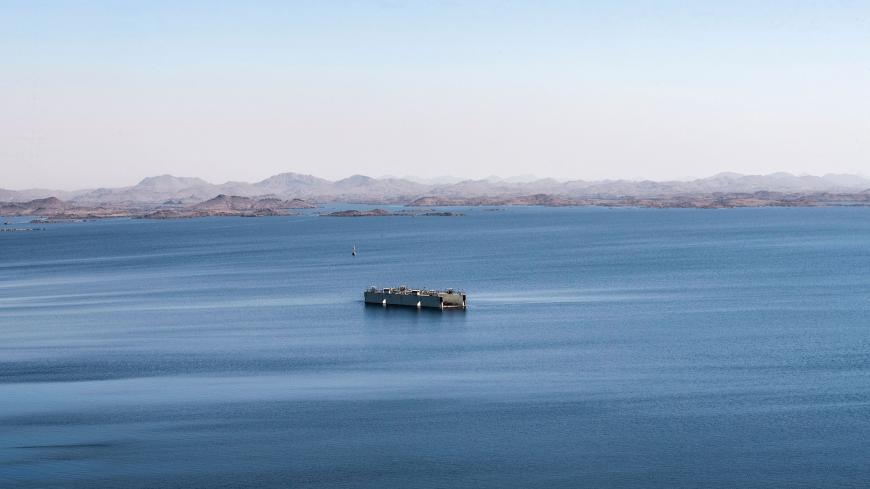 A general view of the Lake Nasser reservoir behind the High Dam in Aswan, Egypt, Jan. 3, 2021. - Khaled Desouki/AFP via Getty Images

CAIRO — Israeli Ambassador to Cairo Amira Oron, accompanied by the political adviser to the embassy, Raslan Abu Rukun, toured the farms of MAFA, one of the largest Egyptian companies that grows high-quality vegetables and fruits.

“There is a huge potential to increase cooperation between Egypt and Israel in the fields of agriculture and irrigation,” Oron said during the visit March 14.

MAFA Organic is part of the Maghrabi Agricultural Group, which grows organic products and exports them to over 55 countries around the world.

Oron’s tour took place after Israeli officials headed to the Egyptian city of Sharm el-Sheikh March 9, where they met with Egyptian officials to discuss economic cooperation between the two countries in several areas, including agriculture and water.

Israeli Intelligence Minister Eli Cohen, who headed the Israeli delegation, accompanied by the managers of some of the largest Israeli companies, tweeted, “We are making history and turning relations with Egypt into warm peace."

Cohen said, “I am proud to represent the country and to lead an official Israeli delegation to Sharm el-Sheikh for the first time in over a decade. During the visit, I met with senior Egyptian security officials to enhance security and economic cooperation, and we will soon reap the fruits. This is how peace looks powerful.”

Ofir Gendelman, spokesman for Israeli Prime Minister Benjamin Netanyahu, commented on the visit March 10, saying that it is the most substantial one in 20 years. Gendelman said in a tweet that the delegation discussed ways to expand trade between the two countries in several areas, including agriculture and water, adding that he expects the volume of trade to reach $1 billion annually.

Samir Ghattas, a former parliamentarian, researcher specializing in Israeli affairs and head of the Middle East Forum for Strategic Studies, told Al-Monitor that the Egyptian government began to change its internal strategy to deal with the de facto policy imposed by Ethiopia since it implemented the first phase of filling the GERD in July 2020.

He noted that Cairo began looking for an alternative way to compensate for the volume of wasted water and to face the potential disaster by launching new projects.

On July 15, 2020, Ethiopian Minister of Irrigation Seleshi Bekele announced the start of the first-phase filling of the GERD, despite the failure to reach an agreement with the two downstream countries, Egypt and Sudan.

A few days later, on July 23, Egyptian Prime Minister Mustafa Madbouly met with the ministers of irrigation, housing and agriculture and approved an initial budget of 4 billion Egyptian pounds ($254 million) for the project of lining canals to provide water.

He pointed out that more desalination plants in the coastal governorates will be established, in addition to wastewater treatment plants, stressing the need to increase the penalties for wasting water and building secret water connections.

Madbouly said that in light of the challenges threatening the water sector, the government is working hard to save significant quantities of water consumed daily.

On July 28, 2020, President Abdel Fattah al-Sisi said during a speech at the inauguration of the Robbiki Industrial City that the state seeks to “save every drop of water” by undertaking modern irrigation projects, with investments amounting to 1 trillion Egyptian pounds ($63.5 billion).

Sisi noted that the country has an integrated plan to manage water use.

Ghattas said that the second-phase filling of the GERD, scheduled for July, regardless of whether or not an agreement is reached between the three countries, would be a disaster, especially since more water will be filled than the first phase, which will have direct negative effects on Egypt.

He noted that Cairo is thus intensifying its efforts to accelerate water treatment and desalination projects, especially since Israel is one of the leading countries in the technology of seawater analysis and water recycling. In addition, it has experience in implementing desalination projects with other countries, which encouraged Egypt to cooperate with it in the fields of agriculture and water.

On Jan. 13, Israel announced that the Israeli national water company, Mekorot, will sign a deal with Bahrain in the coming days to provide it with one of the most advanced desalination equipment in the world, to provide Israeli expertise in desalination technology, irrigation, agriculture and water disinfection.

Mohamed Nasr Allam, former Egyptian minister of irrigation and water resources, told Al-Monitor that the government's endeavor to launch new projects or to benefit from countries' experiences in the fields of water and agriculture is vital and of the utmost importance, in light of Ethiopia’s stubbornness and rejection of international mediation, while it refuses to postpone the second phase of the filling until an agreement is reached with Egypt and Sudan.

On March 9, Ethiopia announced its rejection of the quartet mediation proposed by Egypt and Sudan.

During a conference held in Addis Ababa March 17, marking the 10th anniversary of the inauguration of the GERD, the Ethiopian ministers of foreign affairs and irrigation said that there is no intention to postpone the second filling.

Allam said that Egypt’s annual share of the Nile water amounts to 55.5 billion cubic meters, at a time when its annual needs exceed 80 billion cubic meters and it depends on groundwater and rain to fill the deficit. Yet it cannot fully meet its needs, so Egypt will not accept filling and operating the GERD without looking for alternative methods, he added.

On March 22, Egyptian Minister of Water Resources and Irrigation Mohamed Abdel Aty said that the challenges Egypt faces in the water sector require significant efforts through major projects for water treatment, water rationing and protecting water resources from all forms of waste and pollution.