Egypt announced the building of the world’s largest water desalination plant, in a bid to meet the country’s growing water needs. 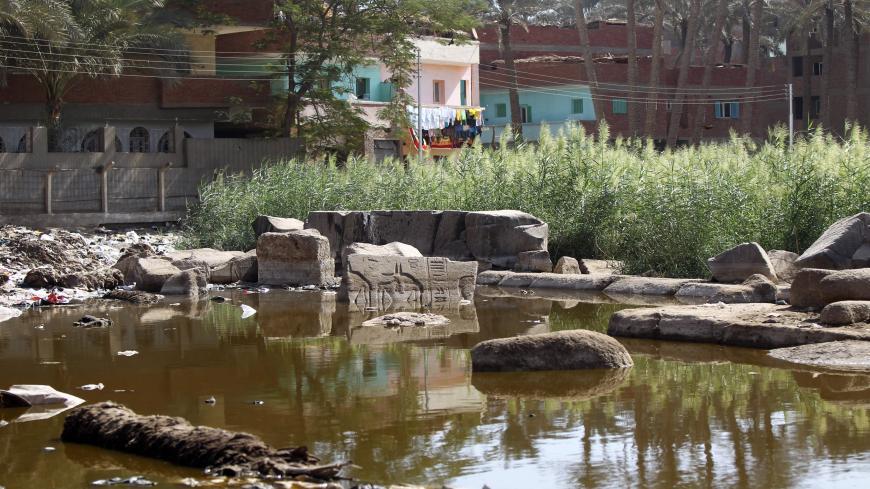 Archaeological sites are drowning with sewage, groundwater and garbage in the polluted Great Temple of Ptah in Mit Rahina village (Memphis) near Giza, Egypt, Oct. 26, 2010. - KHALED DESOUKI/AFP via Getty Images

CAIRO — Egyptian Minister of Water Resources and Irrigation Mohamed Abdel Ati signed Nov. 8 a memorandum of understanding to organize some of the work of the Egyptian-Dutch Advisory Panel on Water Management, in the presence of Dutch Ambassador in Cairo Han-Maurits Schaapveld.

The advisory panel was established in 1976 by a number of Egyptian and Dutch ministers as well as water resources management and development experts from the two countries. The panel aims to assist the Egyptian Ministry of Water Resources and Irrigation in water management.

On Oct. 31, Egyptian President Abdel Fattah al-Sisi announced the plan to inaugurate an agricultural wastewater desalination plant, the largest in the world, in the city of Bahr el-Baqar in Sharqiyah governorate, slated for June 2021. The project’s cost is estimated at 18 billion Egyptian pounds ($1.15 billion) and aims to treat 5.6 million cubic feet of water per day, and reclaim 456,000 feddans (473,256 acres) in the northern and central Sinai Peninsula.

Shady Samir, chairman of Enterprise Sigma Technologies, told Al-Monitor that the Egyptian government is making every effort in a bid to confront the shortage of water resources and fill the current gap estimated at about 20 billion cubic feet of water annually, by establishing over 350 desalination plants.

He noted that such projects would put Egypt in second place worldwide in terms of reuse of wastewater after China, and would help it secure its growing needs for water for 30 years.

Despite public approval of the plan, many Egyptians on social media criticized the establishment of a large water treatment plan, arguing that this project is an implicit admission of Egypt’s failure in the Grand Ethiopian Renaissance Dam (GERD) negotiations, and efforts to find alternatives to the Nile water.

On Nov. 4, a meeting of the ministers of irrigation of Egypt, Sudan and Ethiopia took place to discuss an optimal framework and methodology for managing the ongoing negotiations on the GERD under the auspices of the African Union (AU). The talks are tackling the crisis of operating the dam and the best period of time for filling the reservoirs without undermining Egypt’s and Sudan’s shares.

The Egyptian Ministry of Irrigation, however, announced in a statement the same day that three countries failed to reach an agreement to this effect and agreed that each country would submit a separate report to South Africa, which heads the AU. In the reports, each country presented its vision on the main principle and methodology required to formulate a binding legal agreement on the operation and filling of the GERD, especially during specific time periods.

A political science professor at an Egyptian university, who preferred not to be named, told Al-Monitor that the Egyptian people’s concerns about the failed GERD negotiations are warranted, especially with the upcoming change in the US administration and its policy toward Egypt and Africa, following the victory of Joe Biden.

The US State Department announced Sept. 2 the suspension of some $100 million in aid to Ethiopia upon the direct instruction from outgoing US President Donald Trump, as a result of Addis Ababa’s intransigence in the GERD talks with Egypt and Sudan.

In Oct. 24 statements, Trump had warned about the seriousness of the current situation between Egypt and Ethiopia regarding the dispute over the dam operation, saying that Egypt would blow up the dam because “it’s a very dangerous situation, because Egypt is not going to be able to live that way.” Many local and international observers deemed this statement as support for Egypt's position.

Biden, on the other hand, did not issue any statement regarding his expected policies toward the GERD issue, Egypt or Ethiopia, except for a tweet in July 2020. “No more blank checks for Trump’s ‘favorite dictator,’” he wrote, in reference to Sisi. This suggests that the president-elect will not be as supportive of Egypt as his predecessor.

Ahmed Ibrahim, a professor of political geography at Cairo University, told Al-Monitor, “Water scarcity has been the result of the steady population increase, whether Ethiopia built the dam or not. This necessitates looking for alternatives such as treating wastewater, regardless of any threat to the Nile water, the US stance and the negotiations with Ethiopia.”

He said, “Even if the circumstances of a possible civil war in Ethiopia impeded the completion of the construction and operation of the GERD, this does not mean that Egypt should stop building the desalination plants that are much needed, whether the dam is operational or not."

Ibrahim stressed that the Egyptian government will continue to fight for its rights of the Nile water, even if it manages at some point to cover all its water needs from other alternatives. “The GERD is pressuring Egypt for time, and nothing more. Egypt has now, in one way or another, to speed up the construction of treatment plants, which requires huge funding that Egypt may, at times, be unable to provide as a matter of urgency,” he said.