Cairo has begun fining farmers for inefficient irrigation practices as it promotes a series of projects to enhance water security. 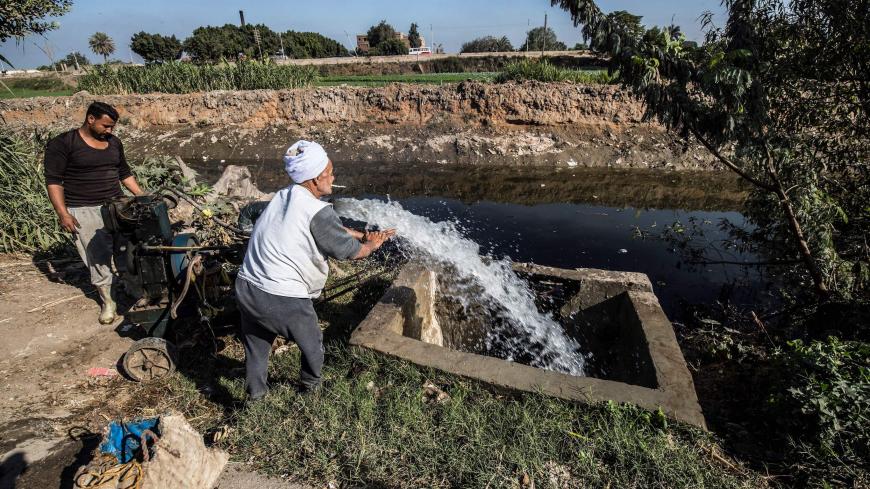 Egyptian farmer Mohamed Omar (C), 65, supplies his field with water from a canal fed by the Nile River in the village of Baharmis on the outskirts of Egypt's Giza province, northwest of the capital Cairo, on Dec. 1, 2019. - KHALED DESOUKI/AFP via Getty Images

CAIRO — Egypt is fining farmers for wasting water as Ethiopia approaches the second phase of the filling of the Grand Ethiopian Renaissance Dam (GERD), built on one of the main tributaries of the Nile River, which Cairo fears will affect its share of water.

On Jan. 28, the Egyptian Minister of Water Resources and Irrigation, Mohamed Abdel-Aty, instructed the ministry’s agencies to begin collecting fines for wasting water from farmers who fail to adhere to modern irrigation systems.

Abdel-Aty stressed the importance of finding successful ways to switch from flood irrigation to modern irrigation systems. He urged more farmers to switch to smart irrigation systems and use tools like soil moisture meters developed by the ministry, stressing the many advantages offered by modern systems to maximize productivity, reduce operating costs and increase profitability through the efficient use of labor, energy and water.

The Ministry of Water Resources and Irrigation's meters measure soil moisture levels to determine the crops’ water needs and send the data to farmers' mobile phones by text message.

In December, the ministry also launched a national project to rehabilitate about 7,000 kilometers (4,350 miles) of damaged canals at a cost of 18 billion Egyptian pounds ($1.14 billion) by mid-2022.

In July 2020, Ethiopia announced it had completed the first phase of filling the GERD despite the lack of an agreement with downstream countries Egypt and Sudan. Ethiopia began constructing the GERD on the Blue Nile in 2011 as a power-generating facility but Egypt fears the dam will affect its Nile water share of 55 billion cubic meters a year, most of it from the Blue Nile.

Egypt's former Minister of Irrigation and Water Resources Mohammed Nasr Allam told Al-Monitor that Egypt is fining farmers who had received state loans to adopt modern irrigation systems but failed to follow through.

“We reject what Ethiopia is doing in the GERD without a binding agreement for all, neglecting Egypt's share of the Nile water. A solution that satisfies all parties must be reached because water is a red line for Egypt since it threatens its security and stability,” Allam said.

Abdel Mohsen added that Egypt's share of the Nile is limited and and crucial for drinking and the rest for agriculture. He considers Ethiopia’s actions unacceptable and the Nile water is a matter of life and death for Cairo.