Egypt announced that it has entered the stage of water poverty, while talks on Ethiopia’s Nile dam continue to stall. 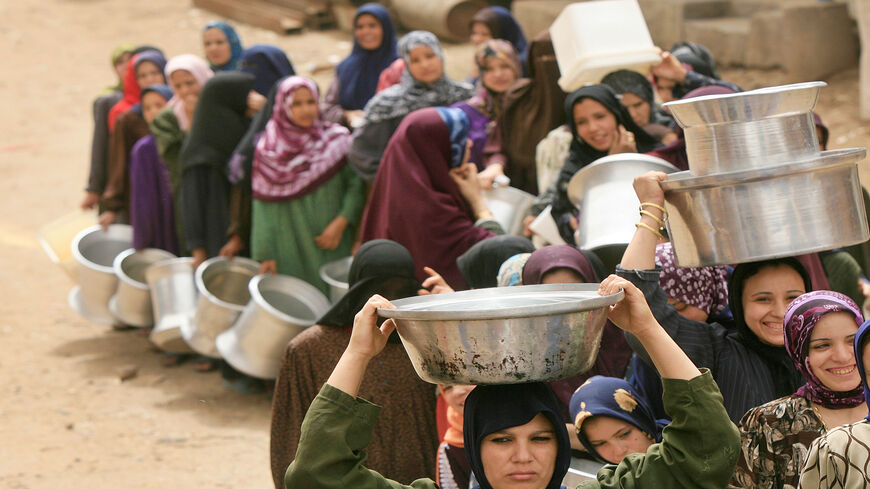 Egyptian women line up at a water cistern (unseen) to fill their containers with clean water at al-Rahawe village, some 40 kilometers (25 miles) northeast of Cairo, Egypt, May 27, 2010. - Khaled Desouki/AFP via Getty Images

CAIRO — Egyptian President Abdel Fattah al-Sisi has recently revealed that his country has reached the stage of water poverty with less than 500 cubic meters of water per capita a year.

Speaking to foreign reporters on the sidelines of the World Youth Forum’s fourth edition in Sharm el-Sheikh on Jan. 13, Sisi noted that the global water level is set at 1,000 cubic meters per capita a year.

He said that the volume of water falling on the Ethiopian Highlands amounts to 900 billion cubic meters, which means that Egypt’s and Sudan’s shares do not exceed 10% of the rainfall in Ethiopia.

Mohamed Nasr al-Din Allam, a former Egyptian irrigation minister, told Al-Monitor that water poverty, as defined by the World Bank, is when a country’s renewable internal freshwater resources per capita is less than 1,000 cubic meters annually, which is the minimum rate to meet the citizens’ needs of water and food.

He noted that since 1991, Egyptians have been living with less than the minimum water share. “For 30 years, we have been suffering from water poverty and from a food gap, because we produce less than we consume, which prompts us to import some food crops, especially those that we cannot grow due to lack of sufficient water,” Allam explained.

Allam added, “Therefore, compromising Egypt’s share of the Nile water is a red line and is not acceptable. We are currently unable to expand our industries due to the lack of the necessary water. The state’s water projects are just a means to mitigate the effects of water poverty but do not serve as a drastic solution to the problem.”

“Egypt is not ready and will not allow this major problem to continue because of Ethiopia’s unilateral actions regarding the Grand Ethiopian Renaissance Dam [GERD] crisis,” he added.

On Jan. 20, Ethiopian Prime Minister Abiy Ahmed shared a statement on his Twitter account, calling on Egypt and Sudan to change their discourse on the GERD crisis.

“Ethiopia has an ambition to build a modern economy based on agriculture, manufacturing and industry. It is committed to developing social infrastructure with quality education, health systems and the provision of clean water for its people. … Electricity is a basic infrastructure lacking in Ethiopia and over 53% of my fellow citizens or about 60 million people do not have access,” the statement read.

Commenting on Ahmed’s statement, Allam said, “Cairo welcomes any call for peace and the resumption of negotiations on the GERD. Egypt does not object to Ethiopia building the dam, but we want to reach a binding legal agreement in relation to the mechanisms of operating the dam.”

He stressed that Egypt does not seek any benefits from the GERD, saying that Cairo is ready to assist in Addis Ababa’s development and optimize its investments, provided that a binding agreement is reached. Allam expected to see a resumption of negotiations in the coming period.

Mohamed al-Orabi, member of the Egyptian parliament and former foreign minister, told Al-Monitor, “Egyptian senior officials have officially confirmed that Egypt has reached a stage of water poverty. The state is undertaking many water projects to alleviate the ongoing risks of water poverty on the country’s development.”

“Ahmed’s statement is political and far from establishing a practical and legal framework to solving the problem [over the GERD]. He feels somewhat relieved after having controlled the crisis at home and achieved some gains in the Tigray region. He also sees that Sudan is going through difficult conditions internally, and that it has been a year since the African Union has been under Congo’s presidency and nothing has materialized yet,” Orabi noted.

He said. "[Ahmed] came out with this political statement that is devoid of any pledge or commitment to the existing tripartite administration to operate the dam, which is what Egypt and Sudan have been calling for. I think his statement was merely a message to the international community that his country is now witnessing stability at home.”

Abbas Sharaki, professor of geology and water resources at Cairo University, told Al-Monitor, “Egypt has indeed been in a stage of water poverty for more than 30 years now, which is due to the fact that the country’s share of the Nile water has been limited since [construction] on the GERD began. Egypt’s annual water share is estimated at about 60 billion cubic meters. Meanwhile, the population has been increasing.”

Sharaki explained, “With this, Egypt’s annual per capita share stands at 550 cubic meters. Meanwhile, Ethiopia’s per capita share reaches thousands of [cubic meters] given the country’s abundance of rain, with the average rainfall rate in the Ethiopian Highlands amounting to more or less 936 billion cubic meters per year. Egypt and Sudan receive less than 10% of Ethiopia’s rainwater.”

According to Sharaki, 80% of Egypt’s water share is dedicated to agriculture. “This is why the Egyptian government has been establishing several water projects to optimize the use and reuse of water in a bid to meet the Egyptians’ needs of water and food,” he said.

“Egypt has been establishing aquaducts and inaugurating many water wells to make use of groundwater for irrigation and agriculture, as well as projects for water treatment plants,” he said.

Sharaki noted that the government has also established many desalination plants to provide drinking water to residents of new cities located far from the Nile River, as well as to increase crop productivity.

“For example, in the past, an acre of a rice field produced 2 tons of rice, opposed to 4 tons today. Also, we no longer depend on sugar cane to produce sugar. We introduced the sugar beet crop, which consumes less water. All these projects are designed to meet the citizens’ need for water and food amid water poverty and Egypt’s unchanging water share and increasing population,” he said.

“Every water drop stored behind the GERD is from Egypt’s share, which is also not enough to meet the citizens’ need for water and food. Some 8 billion cubic meters of water have been so far stored in the dam,” Sharaki said, stressing that Addis Ababa was not successful in generating electricity from the dam yet.

He argued that generating power would come to Egypt’s interest as this operation requires opening the gates of the two turbines of the dam, which would allow water to flow to Egypt.

“It is not acceptable for Ethiopia to generate electricity amid the stalled GERD talks. Politically speaking, this would upset Egyptians. This is why Ahmed should, according to his most recent statement, be honest and serious in making a breakthrough in negotiations to reach a legal agreement that would meet the aspirations of the three countries before starting to generate electricity,” he said.

Sharaki suggested that Saudi Arabia and the United Arab Emirates could play a pivotal role in resuming negotiations, given their huge investments in Ethiopia and good relations with Egypt.