The Egyptian Ministry of Water Resources and Irrigation announced a four-point plan to cope with its water crisis, as talks on Ethiopia’s Nile dam continue to stall. 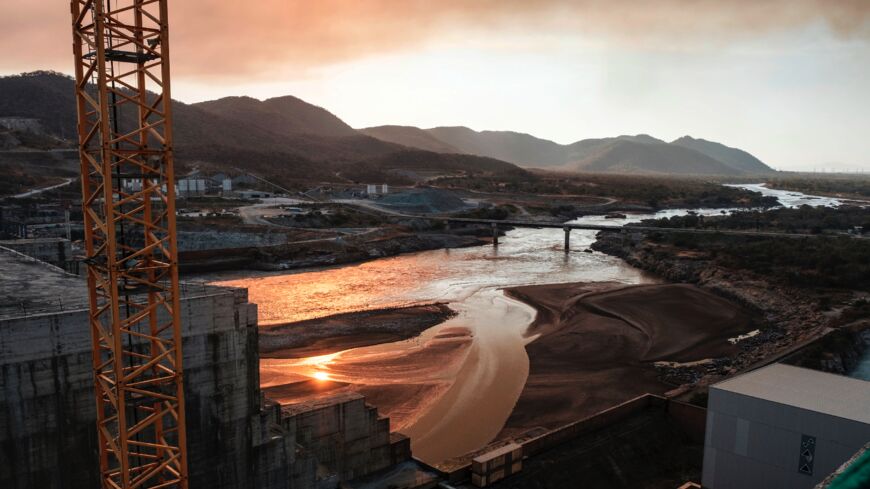 Egypt and Sudan are currently exploring their options on how to deal with Ethiopia's second filling of the Grand Ethiopian Renaissance Dam (GERD) as a fait accompli.

Addis Ababa announced on July 19 it has completed the second filling of the dam’s reservoir despite the objections of downstream countries Egypt and Sudan.

During a meeting with Prime Minister Abdalla Hamdok on July 5, the Sudanese higher committee for following up on the GERD stressed the importance of continuing precautionary measures to reduce the negative effects of the second filling of the dam.

For its part, Egypt took steps toward exploring solutions to avoid any imminent water risks.

The Egyptian Ministry of Water Resources and Irrigation announced in a statement on July 26 the government has a four-pronged strategy that extends until 2050 to solve all water-related problems and crises in the country.

The statement noted that before 2015 the ministry received around 8,000 complaints about water shortages, floods and irrigation issues among farmers, as water did not reach canals. It said the ministry lacked any relevant national strategy or plan and its administrative structure needed to be developed.

Disregarding Sudan’s and Egypt’s pleas to postpone its plans to fill the dam’s reservoir until a comprehensive agreement is reached, Addis Ababa announced in July 2020 it had completed the first phase of filling the reservoir with a capacity of 4.9 billion cubic meters.

To make matters worse, it announced in July of this year the start and completion of the second filling phase of the reservoir without a binding legal agreement with the two downstream states.

According to the Egyptian Ministry of Irrigation statement, as the government’s first priority, the strategy starts with steps to improve the overall quality of water to be safely reused without causing health issues. This would positively reflect on citizens' health and prevent any spread of diseases, the statement explained.

The ministry further indicated the Law of 1984 on irrigation and drainage has never been updated, while encroachments on irrigation and water facilities and misuse of water were ongoing. It further noted rice cultivation areas have not been delimited and the lack of coordination between the ministries of irrigation and agriculture stirred problems.

The second axis of the strategy boils down to rationing water usage through a new management system, establishing water distribution facilities, expanding modern irrigation systems, and using solar energy as one of the most important alternatives to renewable energy. The government also launched a 50 billion Egyptian pound (about $3.17 billion) national program for the rehabilitation of 20,000 kilometers of canals.

Egypt's share of the Nile water amounts to 55.5 billion cubic meters per year. The Nile River is the country’s lifeline. Yet the annual per capita water share is only 660 cubic meters, which is one of the lowest annual water shares per capita in the world.

Egypt is one of the most water-scarce countries in the world, according to statements by Water Resources and Irrigation Minister Mohamed Abdel Ati. Egypt's water resources are estimated at about 60 billion cubic meters annually, most of which come from the Nile River, in addition to very limited amounts of rainwater and deep underground water in the deserts.

The third axis of the government strategy consists of developing water resources to adapt to the repercussions of climate change. This includes a number of protection and mitigation projects against floods through rain harvesting facilities along the northwest coast in Sinai, the Red Sea and Upper Egypt governorates. A basket of coastal protection projects has been implemented stretching over about 120 kilometers with plans to cover 120 kilometers more, in addition to a string of pumping stations. This falls within the scope of an integrated protection system against the dangers of floods, the statement added.

According to the ministry statement, the fourth axis consists of training and capacity building among water workers, while raising awareness on the water risks in the country and the laws needed to protect water resources.

In a press statement on June 5, Abdel Ati pointed to population growth and climate change as the main challenges facing Egypt's water sector. A surge in Egypt’s population by about 75 million people is expected by 2050. According to the most recent census, the population has exceeded 100 million people. This adds to the pressures straining water resources in Egypt.

Safwat Abdel-Dayem, an expert at the National Water Research Center, praised the Irrigation Ministry’s strategy to confront the water problems. “The state started providing financial support for the implementation of this strategy. Most of the strategy’s items fall within water conservation plans that lacked financial support. The items of this strategy must be executed in parallel with educating citizens on the importance of conserving water, reducing waste and modernizing irrigation systems,” Abdel-Dayem told Al-Monitor.

He called on the government to expand water recycling and use in agriculture, expand modern irrigation systems, use and maintain well water that is easily extractable, and implement the strategy’s items in a way that maximizes the expected benefits, reduces water waste, and preserves water and food security.

Sharaki explained, “Sudan is currently the most affected as Blue Nile water levels have already increased significantly in the Roseires and Sennar dams. The six spillway gates have been opened since Ethiopia announced it will collect 13.5 billion cubic meters of the Blue Nile River water in the rainy season, but rather collected only 8 billion cubic meters. Sudan has been draining water for a month.”

He added, “Sudan is witnessing heavy rains, specifically the southern half of Khartoum, along with the flooding of the Blue Nile coming from Ethiopia. A binding legal agreement on the operation of the GERD between the three countries is crucial.”

Sharaki concluded, “So far, the flood season has not reached Sudan but is expected in August. It is also expected to hit Egypt in mid-August and to continue until March. The current amount of water influx ranges from 400,000 to 500,000 cubic meters. It will double next week.”