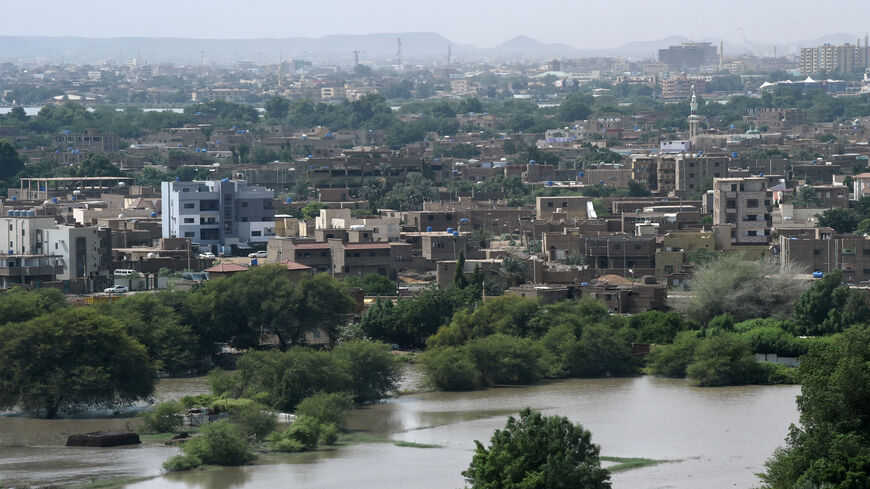 This picture shows a general view of flooded parts of the outskirts of Khartoum, Sudan, taken Sept. 14, 2020. - Mazen Mahdi/AFP via Getty Images

The ministry noted in a statement that as the fall season approaches and rainfall averages on the Ethiopian plateau increases, the Blue Nile water levels have already increased significantly in the Roseires, Singa, Sennar, Wad Madani and Khartoum water treatment plants.

The Sudanese concerns of floods coincide with Ethiopia announcing that it has completed the filling of the Grand Ethiopian Renaissance Dam (GERD) reservoir, without disclosing the volume of water stored.

Speaking to Al-Monitor, former Egyptian Minister of Irrigation Mohammed Nasr Allam said that the Sudanese floods caused heavy losses this year despite the limited water quantities, following the unilateral filling of the GERD and amid lack of information provided on the dam. He said Ethiopia did not coordinate over the GERD filling and operation with any of the concerned parties, and thus Sudan could not take the necessary measures to deal with possible floods or high water levels of the Blue Nile.

On July 24, Sudanese media reported that the floods in al-Fao, in Gedaref state, displaced more than 10,000 families, submerged nearly 20,000 houses, damaged hundreds of tons of wheat stocks and caused a total of 1 trillion Sudanese pounds (about $2.2 billion) in losses in several sectors, according to preliminary estimates in al-Fao.

Allam noted, “As part of efforts to counter the floods, Sudan empties its own dams before July and August so that the dam’s reservoir can contain the flood water volume, before storing the needed water for drinking and irrigation purposes at the end of the flood season.”

He called on Addis Ababa to cooperate to reach a binding legal agreement that would meet the needs of Sudan, Egypt and Ethiopia. He stressed that Egypt is unlikely to face the same risks as in Sudan, because it takes the water more than 20 days to arrive there. Cairo is now undecided about whether to fill the High Aswan Dam so as to counter any water shortages, or to empty it in order to contain the Nile water quantities coming from Khartoum, he added.

On July 27, the Autumn Emergency Committee in Gedaref state demanded that the Federal Autumn Emergency Committee take urgent steps to support the affected people in al-Fao. Gezira Gov. Abdullah Idris al-Kinin said during a meeting of the committee that more than 120 villages in southern Gezira have been affected by the rain, noting that 92 centimeters (36 inches) of rainfall had been recorded in Gezira.

Allam added, “The three parties [Egypt, Sudan and Ethiopia] need to coordinate over the filling and operation of the GERD. For instance, in case Ethiopia decides to generate electricity, a large amount of water will be required at a time when the Roseires Dam will be totally full. In this case, the Roseires dam will collapse. Ethiopia has not officially announced the amount of water that has been stored, which is proof that there is no coordination [with the downstream countries]. The three countries should work to optimize usage of water discharge from the Nile water, which may hit 40 billion cubic meters. Egypt’s share of the Nile water cannot be reduced, because Cairo already has a water deficit of up to 50%. Egypt receives 60 billion cubic meters of the Nile water annually, while it needs up to 114 billion cubic meters per year. Due to this deficit, Egypt imports several crops, including grains such as wheat.”

He said that according to information provided by the Egyptian state agencies, Ethiopia stored between 7 billion to 8.5 billion cubic meters in the dam’s reservoir.

On July 24, the Egyptian Ministry of Irrigation said it has taken all necessary measures to deal with potential flooding through periodic maintenance works at the High Aswan Dam facilities and emergency spillways.

Nader Noureddine, an expert on water resources, told Al-Monitor that technical concerns over potential cracks in the dam and over the dam’s safety indicate that the GERD cannot contain 13.5 billion cubic meters this year, as planned. The Nile flood water volume increased this year due to rainfall, and the Blue Nile water flow and Nile flood water began to cross into the Sudanese territory and Egypt, he added.

In a July 26 press statement, Hanadi Rasheed Abu Shawareb, director of the health emergencies and epidemic control department of the Sudanese Ministry of Health, said that 115 families in Gezira were affected by the floods on July 23-25.

Noureddine said that Sudan has opened the reservoirs of its three dams to enable large water quantities to flow to Egypt and protect its dams from damage or collapse. Khartoum receives about 11 billion cubic meters of water per month in July and August every year, which sometimes hits 15 billion cubic meters during high flood season. This requires Sudan to take precautionary measures every year prior to the flood season, by emptying all reservoirs to contain the flood water and enable the rest to flow to Egypt’s High Aswan Dam.

On July 28, Egyptian President Abdel Fattah al-Sisi met with James Wani Igga, vice president of the Republic of South Sudan for economic affairs and his accompanying ministerial delegation. During the meeting in Cairo, Sisi stressed Egypt’s firm position in favor of a binding legal agreement on the GERD filling and operation so as to meet all parties’ interests.

Commenting on the possibility that the floods hit Egypt, Noureddine said that the High Aswan Dam prevents any flooding from hitting Egypt, and the Toshka spillway allows the excess amount of flood water to be discharged into the Toshka desert.