The floods in Sudan have destroyed thousands of homes and killed hundreds amid stalled negotiations between Cairo, Addis Ababa and Khartoum over the Nile dam dispute. 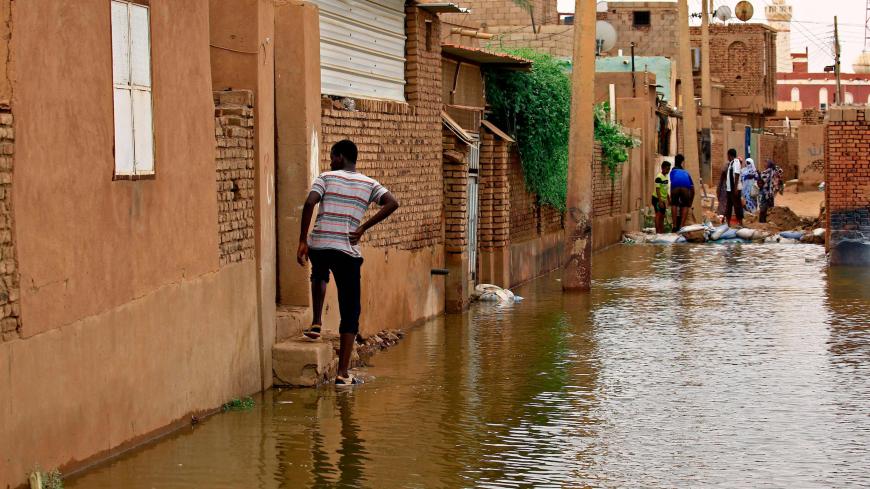 Sudanese men walk in floodwaters on Tuti Island, where the Blue and White Nile merge between the twin cities of the capital Khartoum and Omdurman, on Sept. 3, 2020.

CAIRO — Sudan’s Irrigation Minister Yasser Abbas said Aug. 27 that the level of the Nile hit a record high of 17.48 meters due to the recent deadly floods. It's the highest since the 1912 flood in Sudan, thus breaking the previous record of 17.14 meters.

According to the Sudanese Civil Defense, the floods that have recently ravaged Sudan have destroyed more than 100,000 houses, killed at least 100 people and displaced tens of thousands. Sudanese Prime Minister Abdalla Hamdok said in an Aug. 30 tweet, “This year’s flood caused a tragic and painful loss of lives and properties.”

Although Sudan opposes Ethiopia’s unilateral filling of the reservoir of its Grand Ethiopian Renaissance Dam (GERD), Abbas said in a press conference in Khartoum Aug. 27, “If the GERD was complete, Khartoum would not have suffered such a wave of floods. One of the dam’s advantages, according to a number of studies, is easing the severity of the flooding.”

The second round of talks between Egypt, Ethiopia and Sudan, held under the auspices of the African Union, ended Aug. 28 without an agreement on rules for filling and operating the GERD. Differences persist over technical issues related to managing water flow during times of drought and other legal aspects such as how binding the agreement will be and mechanisms to settle disputes and to coordinate the management of the Blue Nile waters. Sudan and Egypt decided not to extend the talks and instead submitted reports outlining each of the countries’ positions to South Africa, which presently chairs the African Union.

Speaking to Al-Monitor, Mohammed al-Sibai, spokesman for Egypt’s Ministry of Water Resources and Irrigation, said the flooding has not affected the latest round of GERD talks. He said that the amount of water coming into Egypt via the Nile varies with times of flooding and drought.

He added that the variation in the amount of water flowing into Egypt through the Nile every year “is why Egypt is keen to reach a comprehensive agreement on the dam’s filling and operation in the event of flood or drought, so as to save the two downstream countries from any potential negative impact.”

Sibai went on, “Coordination is ongoing with Sudan via the joint technical commission for the Nile waters to measure the river's inflow and manage the flooding.”

After Ethiopia’s decision to retain almost five billion cubic meters of water in the GERD’s reservoir in early July, there were fears that such a step would lead to a downstream drop in the Nile’s level. However, due to seasonal rains near the Nile’s source in Ethiopia, preliminary measurements showed a rise in the river’s inflows this summer. The Egyptian Ministry of Water Resources and Irrigation's committee on the Nile issue noted in a press release Aug. 30 that data indicated that the amount of water entering Lake Nasser in August was higher than that in August 2019 and added that the exact increase could not be determined until late October.

After Ethiopia’s unilateral decision to retain almost five billion cubic meters of water in the GERD’s reservoir in early July, there were fears that such a step would lead to a downstream drop in the Nile’s level. However, due to seasonal rains near the Nile’s source in Ethiopia, preliminary measures showed a rise in the river’s inflows this summer. The Egyptian Ministry of Water Resources and Irrigation's committee on the Nile issue noted in a press release Aug. 30 that data indicated that the water inflow in Lake Nasser in August is higher than that in August 2019, but added that the resulting flooding is difficult to predict.

Abbas Sharaky, a professor of geology and water resources at Cairo University, told Al-Monitor, “The unprecedented suffering that the flood caused to Sudan will increase the Sudanese negotiator’s concerns about the GERD, particularly when it comes to safety and the impact if the dam were to collapse, as Ethiopia has not submitted any studies in this regard so far.”

Sharaky went on, “The dam could reduce the Blue Nile flood risks that Sudan faces by only 10%.” He explained, “The Blue Nile flooding often serves Sudan’s interests, because nearly 1.5 million feddans of agriculture in Sudan depend on the floods that occur during the flood season. The dam will have a major impact on agriculture.”

Sharaky stressed that there is no way to predict how much rain will fall during the coming rainy season, when Ethiopia is expected to fill the dam the rest of the way. "The Egyptian negotiators fear that a wave of drought could have a severe impact on Egypt if Cairo is not involved in the dam’s management and operation in coordination with Ethiopia and Sudan, particularly since Ethiopia is still in control of the filling and operation of the GERD and is not taking into account the two downstream countries’ needs and conditions.”

Youssef Ibrahim, a professor of water resources and former official at the Sudanese Ministry of Irrigation and Water Resources, told Al-Monitor, “The destruction that the flood has caused [in Sudan] is a disastrous effect and result of the unilateral actions taken without coordination.”

He added, “Ethiopia made the unilateral decision to start the filling [of the GERD] at the onset of the rainy season in July. Had it waited for the peak of the flooding season in late August, the negative effects on Sudan would have been mitigated.” 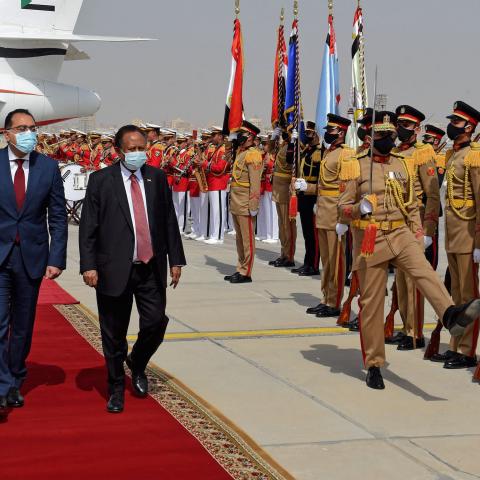 Egypt, Sudan step up diplomatic action as Ethiopia reaches out to regional players